Mobile solutions
Home solutions
Get up to $500 when you bring your phone. Plus, waived smartphone activation fee when you buy online. Limited time offer.
$500 via Verizon e-gift card (sent w/in 8 wks). Activation of 4G LTE/5G phone on One Unlimited for iPhone (all lines on account req'd on plan), 5G Do More, 5G Play More or 5G Get More plans req'd. Device must remain active for 45 days. $500 charge back if service cancelled w/in 12 mos or eligibility req's are no longer met. See vzw.com/bring-your-own-device for details. And for a limited time, we’ll waive your activation fee when you order through vzw.com or My Verizon app. You’ll see the one time charge waived as your “Due Today” amount at checkout.
end of navigation menu
Help
Sign in
Turn on suggestions
Auto-suggest helps you quickly narrow down your search results by suggesting possible matches as you type.
Showing results for
Search instead for
Did you mean:
More Options
Correct Answer!
Abysmal LTE in DC during business hours, great in the evening

We got a 4G LTE Router w/ Voice to tide our small office over (4-6 people, depending on the day) until our fiber service is turned on in another month and a half or so.  The sales rep knew of our intention and plans for the device.

We're in zipcode 20005, just a couple blocks from Metro Center.

I also bought the booster antenna recommended for the device.  When we hooked it up we found a nice spot in the building (actually a window ledge) where we get 4 bars and the device reports a signal strength of about -60dBm and SNR between 6 and 10.  In the off-hours (after about 6pm), our bandwidth is fine: usually around 15Mbps downloads and around 11Mbps uploads, as reported both by the Verizon speedtest and speedtest.net.

But during every business day, the throughput disappears. Either speed test above typically shows well under 1Mbps, and often 0.1 or even 0.05Mbps, and very often just times out with no result shown.  Trying to browse the web or do a remote desktop session becomes almost impossible.  By 5pm it starts to improve, and by 6:30pm, we're back up to well over 10Mbps.  But the problem is, our office workers like to work during office hours.  They're not going to start work at 6pm.

Anybody have any workarounds?  We're desperate.

I've seen some posts on this board that talk about dropping their devices to 3G when it gets really bad.  Does anyone know how to do that with a "4G LTE Router w/ Voice"?  Is there any way to choose which cell tower the device connects to, in case another one nearby is less congested?

Does anyone know whether Sprint/At&t, etc., are all going to have the same problem?  I'd hate to walk away from the money we've spent on the Verizon stuff so far, but the office needs internet, and folks are getting pretty upset.

Here's some screenshots of the Verizon speedtest, taken today at 10:50am, and again at 6:20pm: 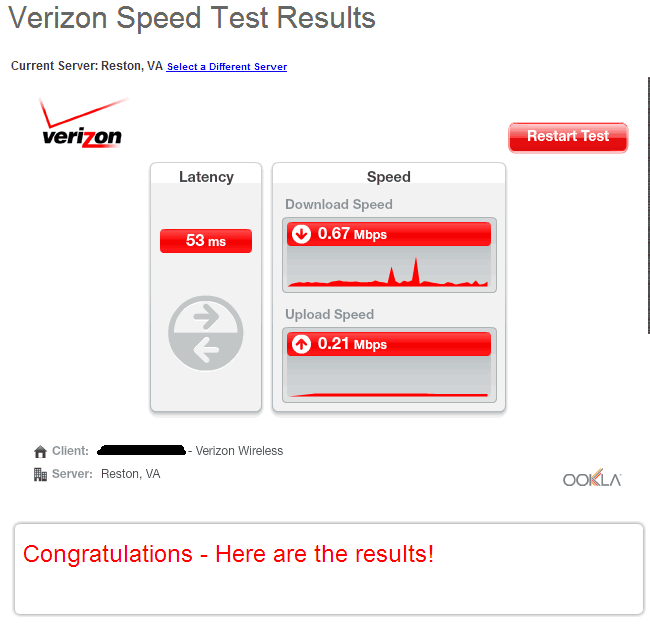 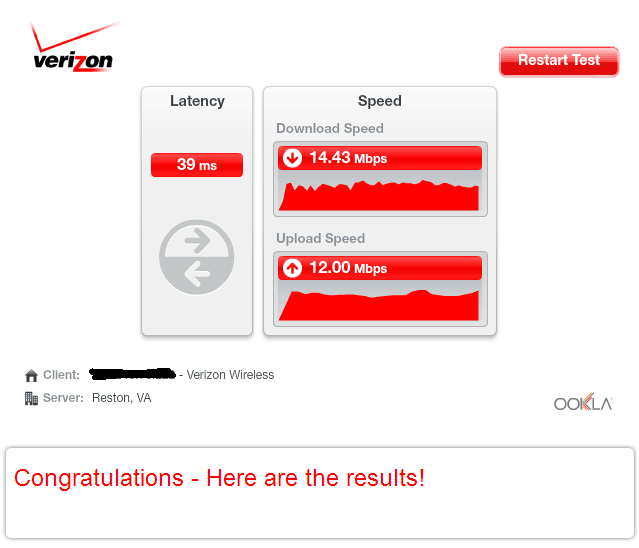 Labels (1)
Labels
I have the same question
0 Likes
Reply
2 Replies
Correct Answer!
Re: Abysmal LTE in DC during business hours, great in the evening

Anyone able to offer a suggestion here?  Or is it just hopeless?  So many people on this board are reporting what are obviously Verizon capacity issues (throughput is fine outside business hours, but disappears during the workday), and no one seems to offer any solutions.

0 Likes
Reply
Correct Answer!
Re: Abysmal LTE in DC during business hours, great in the evening

I work right across the street from Metro Center so I know EXACTLY what you're talking about. Speeds are atrocious during the daytime hours and that's if you're lucky enough to maintain a connection at all. I found the only solution was to give up my unlimited plan and switch carriers. I went to AT&T for a little while and the LTE speeds were consistently 20+ mb/s. However, that was late last year so I don't know if you can still get those types of speeds now. I eventually made the jump to Tmobile and can consistenly get 15-20+ mb/s at any given time during the day while indoors. They've really stepped up in the DC area. Don't know about Sprint. I'd say your best bet would be AT&T if you don't mind their plans or Tmobile if you have to have unlimited.