Mobile solutions
Home solutions
Have a phone you love? Get up to $500 when you bring your phone.
$500 via promo credit when you add a new smartphone line with your own 4G/5G smartphone One Unlimited for iPhone (all lines on account req'd on plan), 5G Do More, 5G Play More or 5G Get More plans between 11/15/22 and 1/4/23. Promo credit applied over 36 months; promo credits end if eligibility requirements are no longer met. See vzw.com/bring-your-own-device for details. Excludes Verizon Prepaid plans.
end of navigation menu
Help
Sign in
Turn on suggestions
Auto-suggest helps you quickly narrow down your search results by suggesting possible matches as you type.
Showing results for
Search instead for
Did you mean:
More Options
***Announcement: Early next week, we’ll be merging the current Fios and Wireless Communities into the all new Verizon Community! Beginning the evening of Sunday 12/4, both Communities will be placed in read-only mode. You’ll still be able to visit the Communities and browse content, but login will be disabled. On the afternoon of Monday 12/5, all users will be able to log into the new Verizon Community. We expect the new Community to be fully functional the morning of Friday 12/9. Additional details can be found in the Announcements board and under Featured Topics!
Correct Answer!
Considering switching to Verizon from Sprint for 4G LTE on new iPhone 5 San Diego

I'm aware LTE capability will not officially be announced until the event tomorrow, but was hoping to get feedback on 4G LTE service on Verizon in my area of San Diego, zip code 92083 (Vista) from real world users.

I did not do that last year when I joined Sprint, and have been very unhappy with the slow 3G data speeds. I know they have "network vision" and are rolling out LTE service, but it is on the the 900mHz frequency, whereas Verizon is using the preferred 800mHz band.

Any feedback would be appreciated.

The best place to go is verizonwireless.com click on the data coverage link it will allow you to type an address in and show you how much 4G LTE coverage Verizon has to offer in your area.

Thanks for the suggestion, but as I stated, was looking for some real world user comments. Not wanting to base my purchase on company generated images. But I did check out 4G data coverage for my zip: 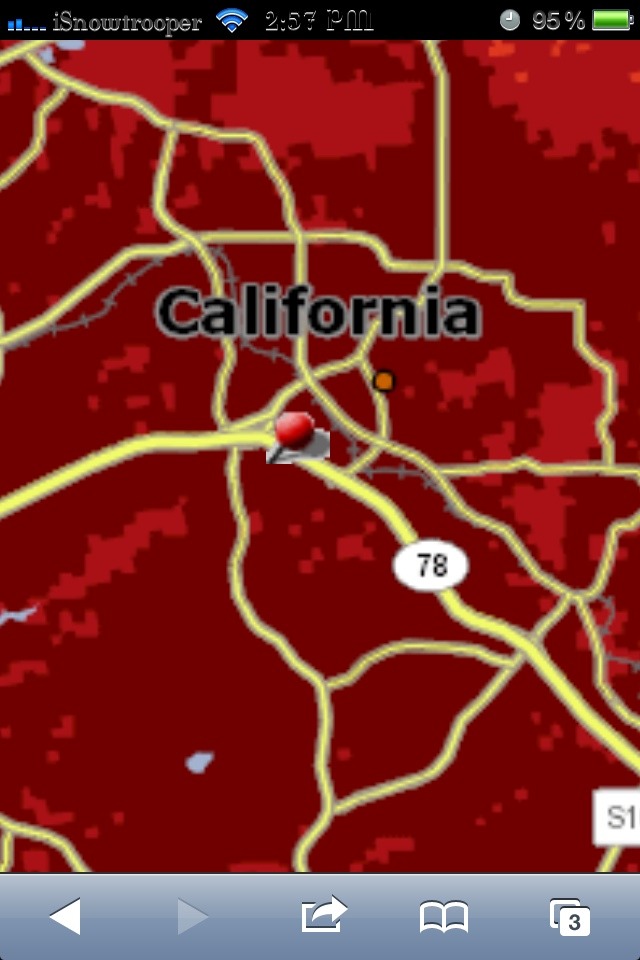 Looks good until I get real specific on address: 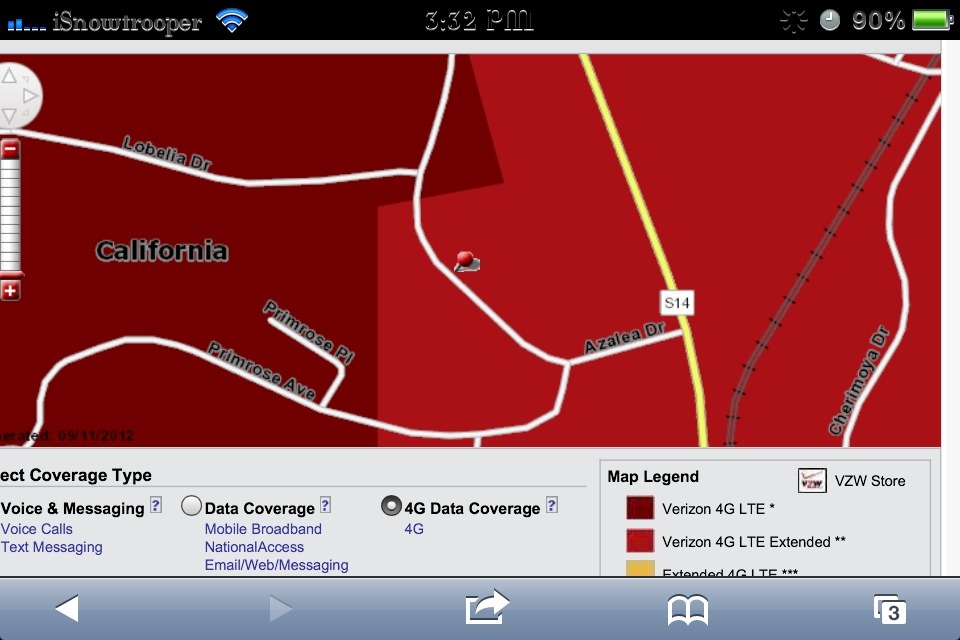 Sure, I'll be in WiFi predominantly @ home, but if my first search comes up with this kind of results, has me a bit worried if the extra 45 bucks a month is worth it.....

Rural user myself, we were told we were on the edge of good 4g coverage, and definately inside 4g.  Signed up for Home Fusion, more expensive plan, less data, and after 3 weeks, no service - nada.  Terrible customer service, except that they'll say, well you are on the edge, we'll come out to the house for $150.  Me thinks they paint the screen red, but it's not real acurate if you're near the borders.  Just like trusting digital gambling machines.

I'm in an "extended area" and receive the same kind of bunk (one guy recently told me that AT&T must have "rights" to my area!). They've even offered to let me out of my ETF rather than deal with my calls when they mess up the network. I have to say that Sprint's customer service was even worse when I did business with them prior to VZW. That said, my town is on the Sprint LTE list. If I get a stronger signal, I'm gone. Same for AT&T if they ever upgrade from HSPA+ on the tower near me. Its all about signal (actually signal to noise or SINR) for LTE. The higher the SINR (less noise), the more likely you'll be able to keep a decent speed. Only way to determine that is to try a device and return it within the return period if it doesn't work.

Well snowtrooper1966, I'd love to have you join the Verizon Wireless family. I'm not from the San Diego area, but I can tell you that I have heard great things from customers once 4G LTE gets added to their area. Even the Extended LTE area you pointed out gets 4G coverage a majority of the time. We're so confident in our network that you have 14 days to try it out. If you don't like it (which I know you will) you can return the device and just pay for the services you've used. Here's more about that return policy: http://bit.ly/IeiJI

And mc1lean, we definitely don't want you to feel like we are trying to push you off instead of deal with our network. What area are you in that you're experiencing trouble with 4G? I'd love the opportunity to help with your Verizon service too.

I did sighn up w/VZN on i5 launch day.

As I was afrid of, I'm getting similar data speeds at home as when I was with Sprint.

Also when around Vista/carlsbadOcenside, LTE speeds are a bit disappointing (12 Mbps range).....

Thanks Jennifer! I really appreciate the offer. What info do you need from me? Here's a shot at the map.

Here's my stats from when the network tanked about a month ago:

Here are some stats after an almost 2 week outage (the same period as above) during which I physically troubleshot 4 local towers sitting in my car with the modem in a netbook, on the phone with several techs. I later received a callback stating that they had discovered a network problem.

Go to Sensorly.com and you can get Many different Views of Coverage from Customers that live in your area What you see on the map is What the Customers in your Area has Mapped using there Device.. you can also choose the other Carriers as well to see there Coverage.. To Move the Map around Take Left Finger and hold down the left clicker button on your Mouse and you can move the Map from one Area to another and by hitting the Zoom in and out you can spread the Map out on your Screen..