Mobile solutions
Home solutions
Have a phone you love? Get up to $500 when you bring your phone.
$500 via promo credit when you add a new smartphone line with your own 4G/5G smartphone One Unlimited for iPhone (all lines on account req'd on plan), 5G Do More, 5G Play More or 5G Get More plans between 11/15/22 and 1/4/23. Promo credit applied over 36 months; promo credits end if eligibility requirements are no longer met. See vzw.com/bring-your-own-device for details. Excludes Verizon Prepaid plans.
end of navigation menu
Help
Sign in
Turn on suggestions
Auto-suggest helps you quickly narrow down your search results by suggesting possible matches as you type.
Showing results for
Search instead for
Did you mean:
More Options
***Announcement: Early next week, we’ll be merging the current Fios and Wireless Communities into the all new Verizon Community! Beginning the evening of Sunday 12/4, both Communities will be placed in read-only mode. You’ll still be able to visit the Communities and browse content, but login will be disabled. On the afternoon of Monday 12/5, all users will be able to log into the new Verizon Community. We expect the new Community to be fully functional the morning of Friday 12/9. Additional details can be found in the Announcements board and under Featured Topics!
Correct Answer!
Extremely disappointed by Verizon Data Speeds - SF Bay Area

I have been a Verizon customer for years now and have about 14 lines.  When LTE came out it was great in the bay area.  The quick LTE expansion was great.  But over the last year (2013) until current, the network has consistently degraded.  All the fast LTE advertisements by Verizon are just lies.  Sometimes I can barely connect to data on 4G LTE.  I consistently get dropped to 3G coverage and that barely works.  It has gotten to the point where I cannot reliably use services that need data.

The slowing data speeds were not really a big deal until the last few months.  When I go to San Francisco I don't even try to use my phone because it won't work.  In cities like Mountain View and Palo Alto my data connection is just slow.  Even in the lesser populated areas like Morgan Hill and Gilroy I have noticed really sub par data speeds.

Verizon may have fantastic coverage, especially when it comes to voice, but I am starting to get fed up with the high fees that this service costs and it isn't living up to its promise anymore.

And customer service has been useless when I call for information regarding this problem.

Yes, and really sad. They are happy to take your money and not so good at delivering what they promise. Speeds are down and recently have been dropping calls. Clearly they have not kept up with the demand though still charge as much for worse service.

The downtown Princeton, NJ area (Nassau St/Witherspoon St.) has been notoriously poor for LTE service for the past year or more.  I reported this problem when using my iPhone 5 and nothing has been done.  The problem occurs every day of the week, not just during peak hours.  I have also noticed a deterioration of voice calls.  While calls don't drop, the quality is much worse than it was a year ago.  When will this be fixed?

I have an AWS capable device and have no issues with LTE in SF. Even during peak times I can pull 50+.

This was taken on Montgomery Street in the financial district during rush hour. AWS works great. I'm not sure how Band 13 only devices perform. 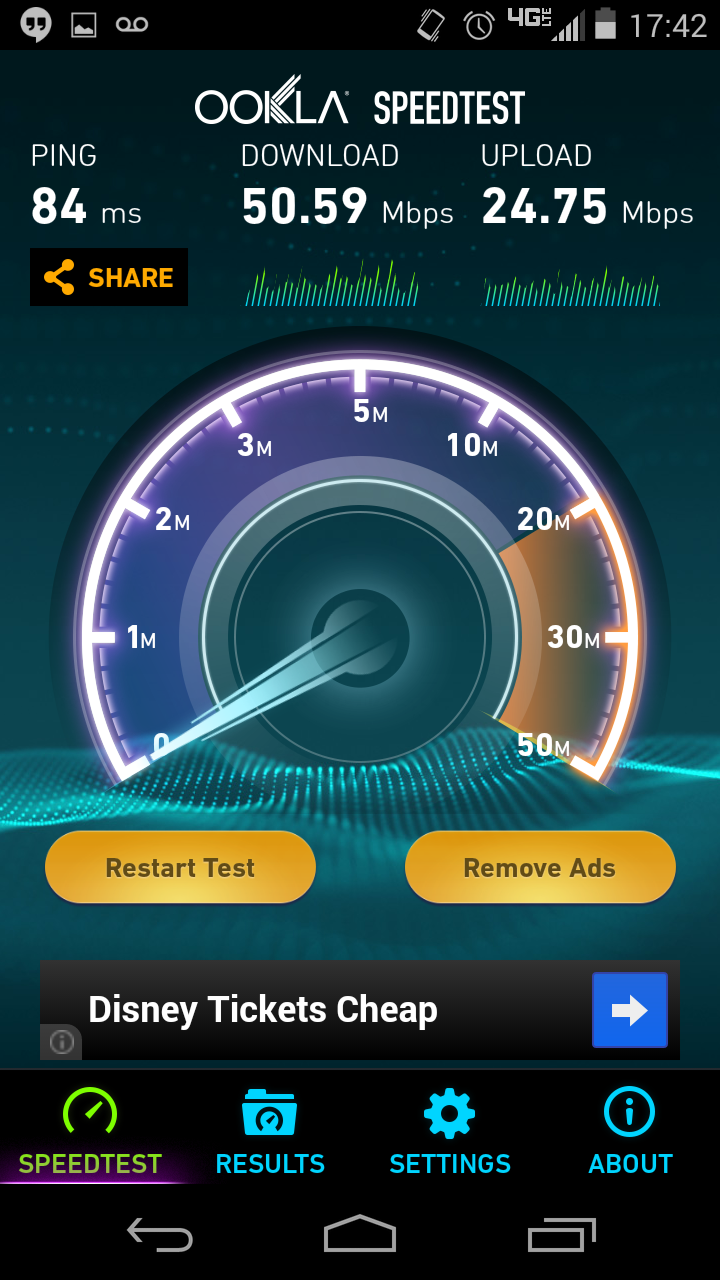