end of navigation menu
Ask a question
Sign in
Sign in
Turn on suggestions
Auto-suggest helps you quickly narrow down your search results by suggesting possible matches as you type.
Showing results for
Search instead for
Did you mean:
Show all
848 Members online 254K Discussions 42.2K Solutions
More Options
Correct answers are available for this post.
Fake LTE Coverage in San Francisco

I just upgraded from an iPhone 4 to an iPhone 5s.  It's my first LTE device.  Looking at the coverage map Verizon provides here, they have very extensive LTE data coverage in San Francisco (the entire city is covered).  Yet, in many locations around the city my phone will show 2-4 bars of LTE but when I go to use the data it pretty much doesn't work.  This happens at multiple times and in multiple locations, and I've already tried a different SIM card and a different phone as well.  The most frustrating part is that usually if I go into my settings and shut off LTE I will get significantly faster 3g speeds, yet my phone doesn't do that automatically because it thinks it has a good LTE signal.  Why in a tech city like San Francisco is Verizon not aware of these issues and actively doing something about it?

I've seen these issues along Irving Street (between 9th and 2nd), around Carl/Stanyon, along Mason street in the Presidio, and all over the financial district (especially near Embarcardero Station).

This is what it looks like when this happens (I could share about 30x of these from the past week all over the city).  This was taken on 9/30 at Fremont/Market. 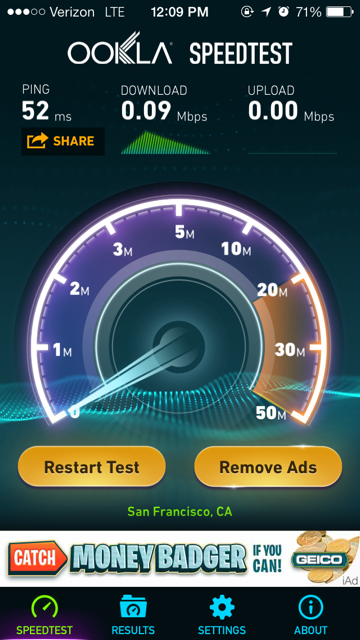