Mobile solutions
Home solutions
Have a phone you love? Get up to $500 when you bring your phone.
$500 via Verizon e-gift card (sent w/in 8 wks). Activation of 4G LTE/5G phone on One Unlimited for iPhone (all lines on account req'd on plan), 5G Do More, 5G Play More or 5G Get More plans req'd. Device must remain active for 45 days. $500 charge back if service cancelled w/in 12 mos or eligibility req's are no longer met. See vzw.com/bring-your-own-device for details.
end of navigation menu
Help
Sign in
Turn on suggestions
Auto-suggest helps you quickly narrow down your search results by suggesting possible matches as you type.
Showing results for
Search instead for
Did you mean:
More Options
Correct Answer!
Horrible 4gLte speeds.

I am extremely disappointed in your service. It's been rather bad for more than a year now, but has been egregiously bad for the last 2-3 months. Been with Verizon for 8 years and it's never been this terrible.

4gLte data speeds are almost non existant. If not always connected to wifi it's completely unusable, which I'm not always able to be connected to wifi, which is why I use the unlimited 4gLte plan. Constantly switching into 1x or No Service mode. If in 4gLte I never have more than 1 bar no matter where I'm at. Its especially bad at my home, in which I live less than a 10 minute walk from my local tower, no matter whether inside or out. I can literally see the individual transmitters on the tower from my house. I have to be right on top of the tower to receive more than 1 bar and consistent speeds. Cycling through airplane mode/turning phone on & off does nothing to fix the issue. It can actually end up making my signal worse. My mobile data speeds are very reminiscent of 1990's 56k dial up speeds. (Data speeds are in attached image.)

Call quality is terrible. Constant dropped calls. If not dropped, no one can understand one another because it all sounds like a garbled mess. Often times can't even make or receive a call due to a No Service signal. It has become detrimental in the event of sudden emergency situations.

I pay too much for services I'm not receiving. I would have already switched companies already if not for the price of switching being higher than what I currently pay. But, considering your services, I'm considering biting that financial bullet.

I'm probably yelling into wind because I don't expect anything to be done about it. 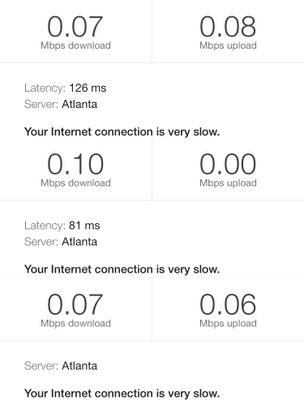 2 people had this problem.
I have the same question
0 Likes
Reply
2 Replies
Correct Answer!
Re: Horrible 4gLte speeds.

Hello, we want you to have easy access your services. Please send us a Private Note to proceed.

For the last 2 months, I have never had more than 1 bar on my phone. I called Verizon the day my service was not cooperating and they told me they were upgrading a tower in our area and the the signal should go back up after the upgrade. Well, here we are 2 months later still with only 1 bar and if I don't have my phone connected to wi-fi I would even be able to make calls from my own home, the same home I use to have 5 bars in. Maybe this is a plot to get everyone to buy 5G phones. The only problem is I have 4 other brand new phones in the house with the same issue. I called Verizon to express my non-love for their services and they tell me I have to trouble shoot my device. I told them I want 5 new phones for my trouble and a reduced bill. The billing lady hung up on me. How is that for service. Plus now when you call, your house has to be on fire in order to get a person on the phone. I am currently looking into AT&T to see if I can get 5 new phones with them and transfer my entire house. Verizon has gone way down hill and fast in my book.