In-Store or Curbside Pickup: (excludes prepaid):
Same-day delivery: Same-day delivery is available in select areas.
Sign in
Help
Turn on suggestions
Auto-suggest helps you quickly narrow down your search results by suggesting possible matches as you type.
Showing results for
Search instead for
Did you mean:
More Options
Correct Answer!
Inoperable LTE service in midtown manhattan

I've been using Verizon's LTE service in midtown Manhattan NYC ever since the iPhone5 came out last year. Last year I enjoyed great speeds using LTE network, but recently it has come to a point where I simply cannot use any data during working hours (9-5 M-F) and consistently get 1-2 bars at most. I've had several calls with verizon tech support where we've been able to rule out any idiosyncratic issues with my phone - Verizon was nice enough to ship me a replacement phone overnight, only to find out that even the new phone had the exact signal issues. They sent out testing vans to my area and confirmed that there were indeed capacity issues here. This makes sense - midtown Manhattan is probably one of the busiest areas with the highest concentration of VZ users in the US. Every weekday, there's a huge influx of commuters into the city that bring additional load to the network.

However, what I don't understand is now that they've identified the problem, I don't see any large efforts being made to fix it. I was told by tier 2 support a month ago that there have been general infrastructure updates done in Manhattan - however, as seen from my speed tests below, data speeds have only gotten worse (now 10-20kbs – worse than dial-up), I’m assume as more people switch on to the LTE network. I'm paying premium fees for LTE service, but I can't even use it during the period at work where it's most useful to me (at home I can just connect to wifi). I'm not sure why more people haven't reported this problem - I'm guessing they've come to accept sub-par network coverage in NYC. Tried to do my own research to no avail, as all of my coworkers around me with an iPhone5 was smart enough to go with AT&T (and, surprise! they are all smoothly sailing with 4-5 bars).

It's not an acceptable response to be told that "there's nothing they can do" as I was by the last VZ rep I spoke with. The way I see it, Verizon needs to fix their issue as Manhattan is one of the most important areas of data coverage in the United States, or they should allow customers like me to terminate their contract early without penalty so we can switch to a service that actually works - it is after all Verizon that is breaching contract by failing to fulfill the performance claims with LTE. Something needs to be done - at the very least, New Yorkers need to be informed of these capacity issues before considering to upgrade to LTE or switch to Verizon, especially if VZ’s intent is to trap customers into non-performing contracts with no effort to address the underlying issue.

#1: one bar in midtown east Manhattan, outside in broad daylight at noon. My coworker who took this picture from his AT&T phone sent me this picture via SMS at 12:15pm. It arrived on my phone at 1:40pm. I think it’s pretty safe to say that the bottleneck was on my end of the transfer.

2#: Speed tests done back in January this year - notice the difference during work hours vs weekends and evening: 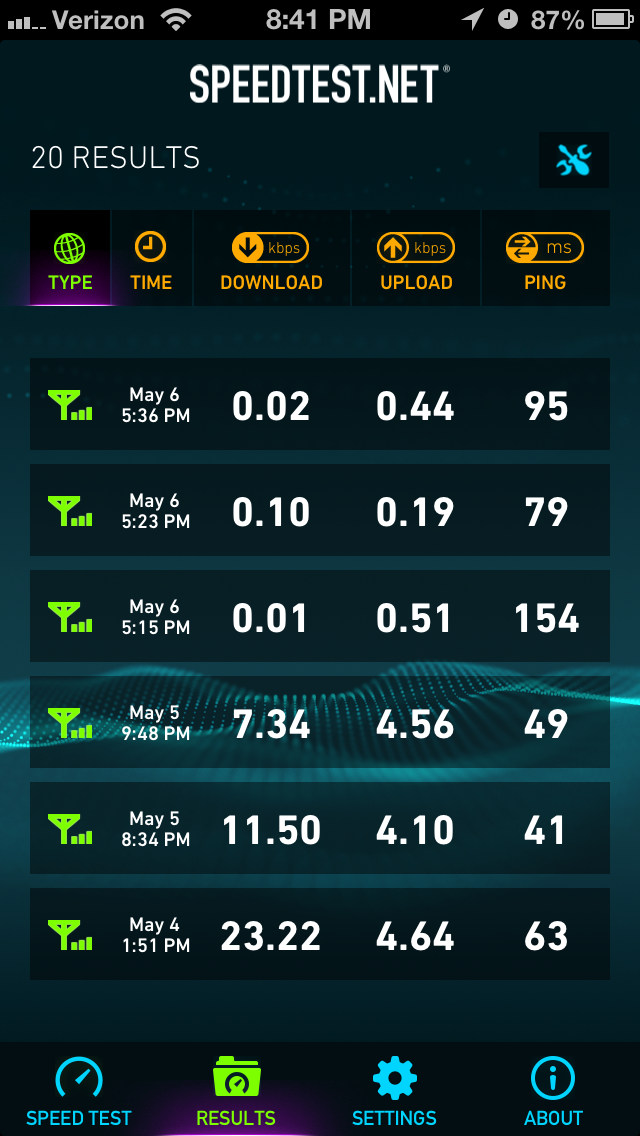 #3: Speed tests this week – getting progressively worse (10-20kbs is worse than dialup!)

Same exact issue here!  I have been to the local verizon stores, they do not help AT ALL.  They claimed it to be my sim card...swapped...same issue.  ALL of the phones in the stores have the same awful speeds.  This has honestly become pathetic.  It's sad...just from a google search of: Verizon LTE midtown, these are the first few results:

How is it possible that the supposed best coverage, has (1)  little coverage in midtown nyc, (2) When you actually DO connect to LTE, the speeds are essentially the same speeds as 3g!    ...ATT, Tmobile are confirmed to be faster at the moment (literally just went to the ATT store across the street from VZ near Grand Central, and the speeds were definitely noticeable).  Oh, and the "help" I received in Twitter wasn't much better..."maybe your phone is the issue" -- after constantly telling them that I get great service OUTSIDE of Manhattan.

Confirmed. We had the same issues with our LTE service during the second week of April 2013.

This is a real drag. There needs to be more communication from Verizon to the customers when things like this

happen. We all know that new technology has bumps in the road - just treat us with respect and you will earn ours!

I'm experiencing the same issue as we speak. The service is just not what it used to be when I first signed up. I've tried numerous restores and even have a replacement device.

Does VZ even review these boards?  This has gotten to the point of unbearable.  I may just get a prepaid tmobile plan for 2 months (when my VZ contract is over), then make a decision at that point.  For what it's worth, those struggling with LTE on VZ in NYC -- just use 3g on your phones...it's actually more reliable.  Not what we paid for, but if you have no choice or are unwilling to pay for prepaid and vz at the same time, like myself.

This is a peer to peer community forum where customers can assist other customers with their questions. There are some VZW reps that roam the community, but they usually only respond to discussions marked as unanswered questions. This particular discussion isn't marked as a question so the likelihood of them responding is unknown.

Thanks Ann...unfortunately though, one of the threads that I referenced (which was marked as a question) was actually just closed without any solution...
https://community.verizonwireless.com/thread/787806
I'm sure this whole situation for anyone in midtown NYC is not exactly ideal and VZ is not acknowledging our issues (whether in forums, phone, in-person, etc.).  Does anyone know of an email address I can try?  I have gathered some lengthy details/analysis and would like to send it over for review as my final attempt at this.  Thanks.

This is just a guess, but the other discussion linked is fairly old and the more recent posts appear to be off-topic. Both are could be why it was locked.

I'd like to keep this thread going because the service I receive from Verizon is inexcusable.  I work in midtown and live in the UES and I can barely retrieve email because the signal strength is so terrible.

Has anyone been able to find a solution?  There are multiple people from my office who use verizon and can barely access the internet with their iPhone.

When I called Verizon, I was advised that many other users were using signal boosters, and therefore pulling signal strength from regular users like myself.

The whole situation is very disheartening, considering the amount I pay each month for this so-called service.

Mark me down as another unsatisfied midtown manhattan customer. I am a new verizon customer, having just purchased the galaxy s4.

The 4g lte where I work on 48th and 6th is COMPLETELY unusable. I can't load a single webpage, stream pandora, or load a youtube video outside or inside. My text messages frequently get sent back undelivered.