Mobile solutions
Home solutions
Have a phone you love? Get up to $500 when you bring your phone.
$500 via Verizon e-gift card (sent w/in 8 wks). Activation of 4G LTE/5G phone on 5G Get More plan req’d. Device must remain active for 45 days. $500 charge back if service cancelled w/in 12 mos or eligibility req’s are no longer met. See vzw.com/bring-your-own-device for details.
Help
Sign in
Turn on suggestions
Auto-suggest helps you quickly narrow down your search results by suggesting possible matches as you type.
Showing results for
Search instead for
Did you mean:
More Options
Correct Answer!
Newly Launched 4G Market (BAD ping from 7-11pm)

First post here. Anyhow, I have been a Verizon subscriber since December 2011 and a Rezound user. Howell, MI (48843) was added to the 4G list on April 19th. I have noticed that around 7-11pm the Ping time rises dramatically, but oddly enough the Bandwidth INCREASES. I'm pretty tech saovy and my opinion is that the high ping is actually reducing the amount of data accessable in a timeframe. Browsing sites is very difficult since the high ping time is causing delays between loading each image and link within a page.

Bottom line, 500-700+ ping times throughout the city here. This is a medium to small area too, so its not like NYC traffic. In my opinion, there must be a lack of available ports at the backhaul site. Anyhow, heres a screenshot....

This is the first place I have ever experienced this problem, the town to my east experienced no speed difference at this peak time(7-11pm)

Notice how Speeds increase as PING increases. This is an issue. 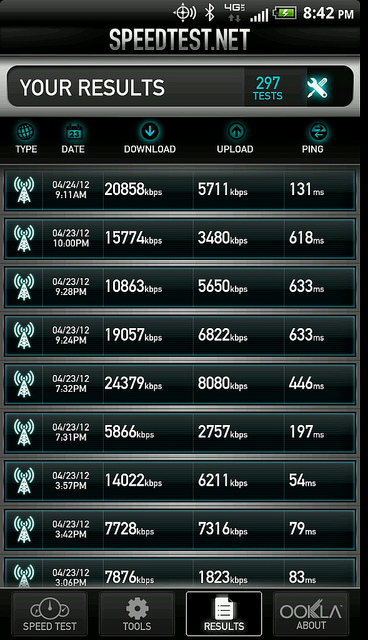 Lol, can't satisfy anyone. All the other carriers can't touch most of those speeds

Well, if only it was that simple.

Total speed is measured in 3 ways.

If a given website has 15 images on it and 2000 words of text, banners and such.... Having a 650ms ping time means that every image that will be downloaded will have 650ms of time added onto its retrieval. This makes an average page take 8 seconds+ to download over a regular ping of 50-100ms that 4G is usually at.

So a 3G connection of 100ms can download just about any page faster then a 4G page with a 600ms ping time.

Downloading or uploading a SINGLE file will be faster regardless of the ping... The ping is the reconnect time between the host and client. So adding the reconnect time of 650ms between image files within a page that might have 15-20+ images will add a TON of time to the website loading.