Mobile solutions
Home solutions
Have a phone you love? Get up to $500 when you bring your phone.
$500 via promo credit when you add a new smartphone line with your own 4G/5G smartphone One Unlimited for iPhone (all lines on account req'd on plan), 5G Do More, 5G Play More or 5G Get More plans between 11/15/22 and 1/4/23. Promo credit applied over 36 months; promo credits end if eligibility requirements are no longer met. See vzw.com/bring-your-own-device for details. Excludes Verizon Prepaid plans.
end of navigation menu
Help
Sign in
Turn on suggestions
Auto-suggest helps you quickly narrow down your search results by suggesting possible matches as you type.
Showing results for
Search instead for
Did you mean:
More Options
***Announcement: Early next week, we’ll be merging the current Fios and Wireless Communities into the all new Verizon Community! Beginning the evening of Sunday 12/4, both Communities will be placed in read-only mode. You’ll still be able to visit the Communities and browse content, but login will be disabled. On the afternoon of Monday 12/5, all users will be able to log into the new Verizon Community. We expect the new Community to be fully functional the morning of Friday 12/9. Additional details can be found in the Announcements board and under Featured Topics!
Correct Answer!
Regret switching? - LTE uploads in San Diego are VERY poor

I just switched from AT&T to Verizon last week, and so far have been regretting that decision.  Not only has coverage in east county been less than what I was accustom to on AT&T, but data speeds have also been MUCH slower.

Specifically, upload speeds in Lakeside, CA 92040 have been around or under 1 Mbit.  I tried to use FaceTime for a video call yesterday, and while I could see the remote person, most of the time they could NOT see me because of a poor connection.  I hung up that call and ran a speed test to find 5.59/0.27 Mbits!

I ran another test, on another day, on another phone in Mission Valley, which is quite central in San Diego, and found more poor LTE speeds of 4.38/3.98!  These speeds are what I would expect from a 2 or 3g network, NOT LTE.

Are these typical speeds on Verizon? 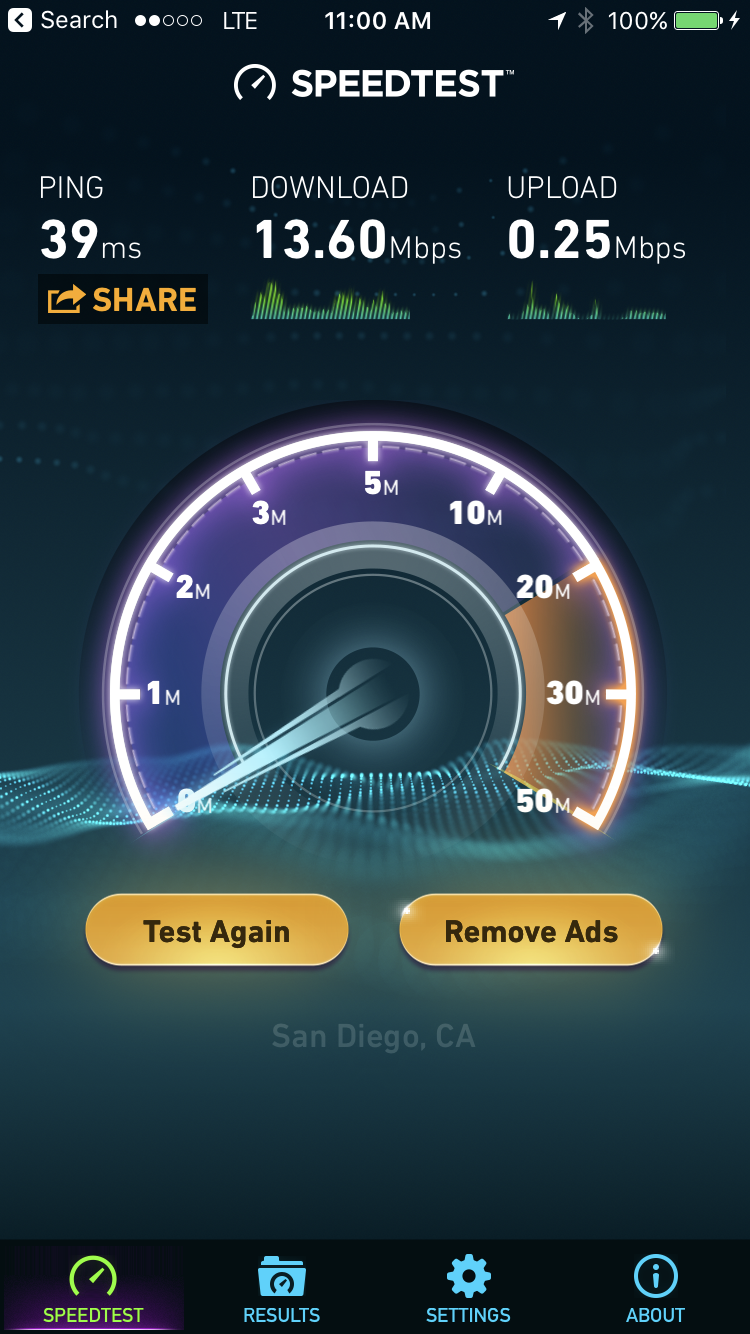 I am in San Diego and do not see this. What part of town? Does it stay that way in other areas. Verizon overall in San Diego is excellent coverage.

Here is around UTC mall area 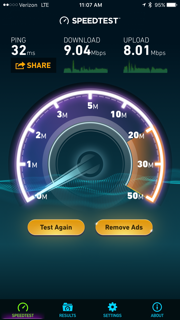 I apologize, I missed you were in Lakeside and Mission Valley. Certainly the 0.27 Mbps is not typical. The LTE 4.38/3.98 in Mission Valley while slow is more than enough for streaming Facetime and video.

What plan are you on? Are you over 22GB if you are on the new unlimited plan?

Yes, the Mission Valley speed is "acceptable" in terms of use, but not really in terms of what should be expected from one of the nations largest carriers, on their LTE network, in the middle of a major city.

I just switched last week to the new unlimited plan.  I have only used 2 GB's to date.

I know this article is about a year old now, but it would seem that Verizon is NOT ahead of their competition, at least in San Diego, in terms of network speed and latency.  While I can't vouch for T-Mobile, I can for AT&T, and It seems as though AT&T and T-Mobile are better choices in San Diego.

I can tell you I have had AT&T and T-mobile for work in San Diego. I also travel a fair bit. With T-mobile we had people asking to use their own personal phones due to so many poor signal areas and dropped calls.

I personally go by do I get done what I need to get done and while speed tests can be interesting, are really not measuring real world requirements. Verizon has given me the best overall experience in San Diego and travelling by far.

Having said that, 0.27 Mbps is not acceptable if it is consistent and you should report it to Verizon.

AT&T unlimited plan is not as robust as any of the other offerings.

Yes, I was VERY skeptical of T-Mobile, which is why I ended up moving to Verizon.  But I figured it would be nearly equal to, if not better than AT&T.  I guess the "better" part of Verizon must be nationwide coverage, but not speed, especially in San Diego.

How do I report a network problem to Verizon?  With AT&T they had an iOS app (AT&T Mark the Spot on the App Store ).