Mobile solutions
Home solutions
Have a phone you love? Get up to $500 when you bring your phone.
$500 via Verizon e-gift card (sent w/in 8 wks). Activation of 4G LTE/5G phone on 5G Get More plan req’d. Device must remain active for 45 days. $500 charge back if service cancelled w/in 12 mos or eligibility req’s are no longer met. See vzw.com/bring-your-own-device for details.
Help
Sign in
Turn on suggestions
Auto-suggest helps you quickly narrow down your search results by suggesting possible matches as you type.
Showing results for
Search instead for
Did you mean:
More Options
Correct Answer! Jump to solution.
Slow Data Speeds, West Knoxville, TN

I have called customer service to report this issue but they advised that I also report here for a faster response. In West Knoxville Tennessee around the intersection of Peters Road and Cedar Bluff (about a 2 mile radius around this area) data speeds on LTE have been horribly slow. I have dealt with it thinking the issue would get resolved soon but the issue has been occurring for over a 2 months now and multiple other people I know are having the same issue, all iPhone users - I have not talked with other device users about the problem.  A specific address you can check is a Kroger @  9225 Kingston Pike, Knoxville, TN 37922.  I always have  a full signal in this area and can make/receive calls but the data speeds are the issue. Today, specifically, the data service is completely un-usable, a speed test shows less than 3g speeds.  Just a few miles down the road speeds are fine.  I am not on an unlimited plan and are not de-prioritized.  This is near my work and I have been near here a 3am and the issues occurred then, There is some technical problem and I would appreciate an expeditious fix. See the speed test results below for an example of this issue. 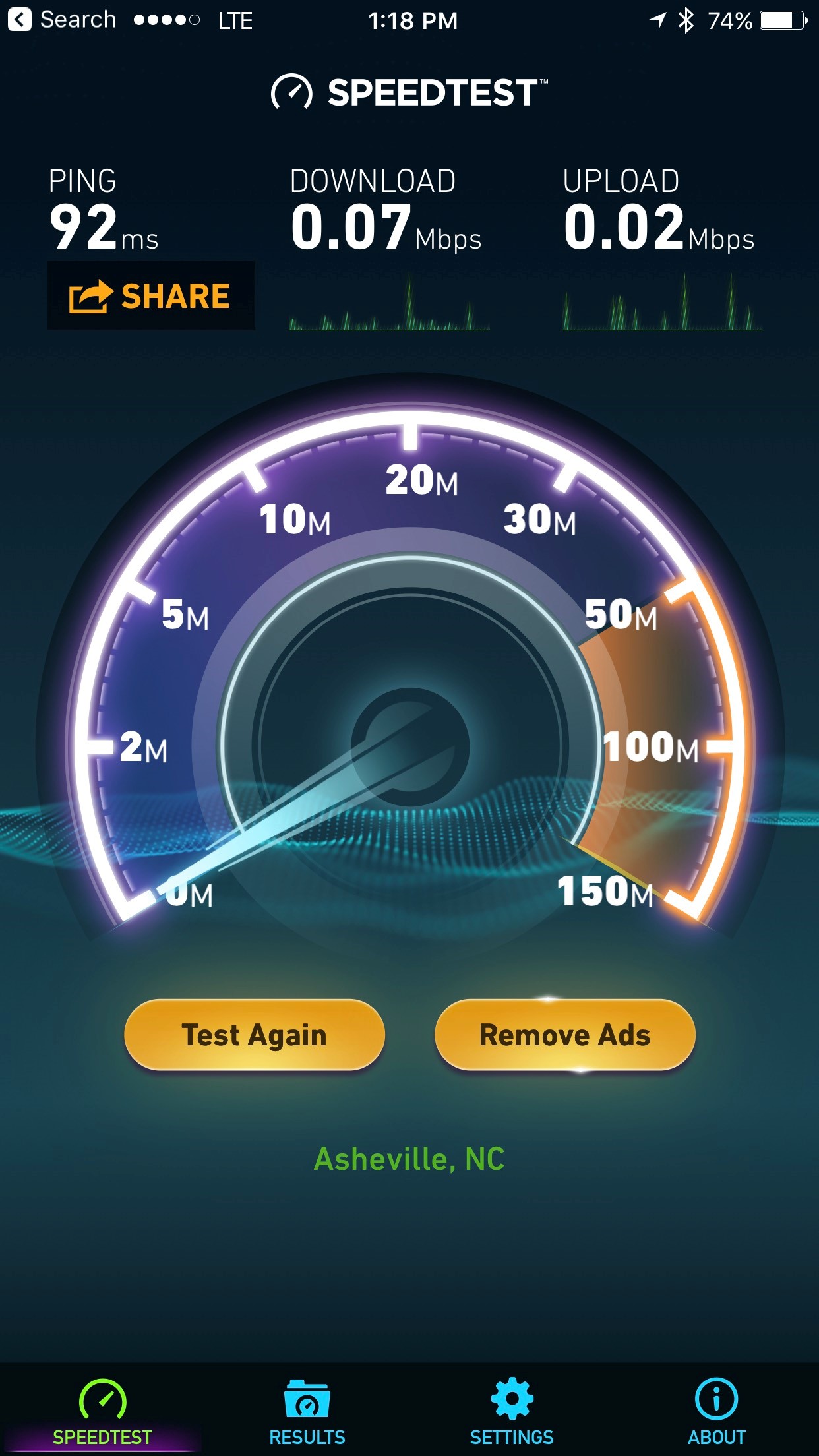 This will be my last post here... I got a call from Verizon yesterday evening saying they are closing the case because the problem is now resolved where resolved by there definition is that they have analyzed the problem and their is no near term fix.

The issue as they describe is due to "tower overloading" in this specific area and a change was made on 4/3/17 to relive some pressure. From my experience I am able to use my phone on LTE in this area now but just barley; 3g is still giving better speeds.  The person I spoke with said that the more complaints they receive will cause the "signal team" to evaluate installing a new tower in this area.  Even if they decide to install another that would take many months to complete.

I urge anyone in this area who is having issues to contact Verizon, insist that they open a case - if they tell you there are no reported issues in the area that's a lie and I have case number to prove it.  If they do not connect you with someone who either provides you a case number or sends one to you via text nothing is recorded and nothing will be done.  We need multiple reports so they will take action.

This whole situation shows that version is falling from their throne of best carrier.  Any company like this monitors their equipment; they had to know this was going to be an issue long ago by looking at trending data but they took no action.  I would put money on the fact they are planing to "fix" this issue in a few years when 3G gets turned off by using that spectrum for LTE.  If this gets worse again in the coming months, as I fear it will, I will have not choice but to jump ship to AT&T

Let's get you back in the 4G fast lane ilovfriday. I have verified there are no reported issues in the area. Do you know of other Verizon Wireless customers in the area who are experiencing the same issues? Are issues only when you are indoors only or both indoors or outdoors?

This when standing outside and as reported in my original post I know multiple people who are affected in the same area.

Thank you for clarifying. I wouldn't be able to function if I had service issues especially when it's been happening for over 2 months! Not to worry, I am confident that we can get this resolved. Please check your inbox for my Private Message.

I am having the SAME issue.  I have tried closing out everything, rebooting, turning off WIFI, etc. but nothing is working.  I have been trying to download a speed test app to test the network, but my phone won't download it on the LTE network.  My work is located in the exact same area ilovfriday has posted about.  However my issue has been a much smaller time span- only 2 weeks of this issue.  If you were able to help ilovfriday, please share the love!  Any insight or fixes would be greatly appreciated as my phone is basically a paper wait during normal business hours until I can get home and be on my WIFI network.

Help has arrived! Having slower than normal speeds for two weeks is definitely a drag. Let’s roll up our sleeves to figure this out for you. Ilovfriday mentioned they have an iPhone. Do you have an iPhone as well? If you don’t have an iPhone, what make & model phone do you have? Does the decrease in speed happen when you are inside your office as well as outside the building? Have you recently downloaded any new apps or software updates?

Yes, I have an iPhone 6. It occurs both when outside and inside the building.  I have not updated software recently however I did download a speed test app after I was already experiencing the issue. I have also reset the network settings hoping it would fix but it has had very minimal impact.

You've done a lot of work on your own, and that's greatly appreciated rmgenua. You mentioned that you have not updated your software recently. What software version are you running? This could be impacting the way your phone connects to the network.

I have a Samsung S6 as does a friend of mine.  The 4G speed in West Knoxville has been unusable this week.  I am getting less than .88 Mbps Download and .01Mbps upload.