end of navigation menu
Ask a question
Sign in
Sign in
Turn on suggestions
Auto-suggest helps you quickly narrow down your search results by suggesting possible matches as you type.
Showing results for
Search instead for
Did you mean:
Show all
574 Members online 254K Discussions 42.2K Solutions
More Options
Correct answers are available for this post.
XLTE

I have the M8 and in Phoenix and so far, still pretty slow and dropped to 3G twice. Maybe it's still early but not seeing a difference yet

Labels (1)
Labels
I have the same question
0 Likes
Reply
8 Replies
Correct answers are available for this post.
Re: XLTE

Lets get things sped up ajnevares2! What zip code are you located in? Have you noticed slower speeds in a specific location or everywhere in the area?

Ditto here on my Lumia Icon. Seeing '3G' in the status bar more than I used to, and still only getting about 18down/13up according to SpeedTest.Net app

It is slow now I can't wait for throttling.  Maybe I should use the U.S. mail. 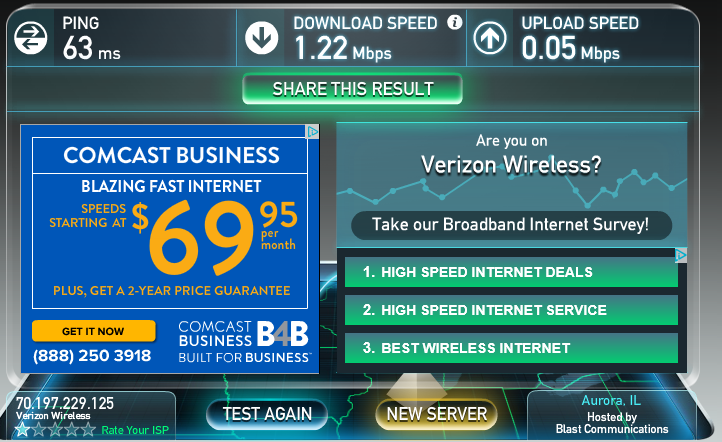 Sorry for the delayed response, I decided to give this "XLTE" a little more time and still not seeing a difference after a few months...primarily in and around the 85282 zip code. At home...1 bar/2-3 mbps tops. I go walking often in my neighborhood and it always fluctuates between 3G and 4G and I have yet to see it over 3 bars unless I am on a phone call (using M8 by the way) I recently traveled by car to southern CA and southern NV and the signal strength was great by comparison in most cities visited (LA, Ventura, Santa Ana, Vegas) and places in between...but here in Tempe, its pretty useless since it is never consistent or strong. I do have a pretty big mountain next to my place and only a minute away from a pretty popular freeway which I am guessing is the issue, but relied on XLTE to provide a better experience but have yet to see it here at home. I have seen improvements where my family lives (85339) where in the past, it was 1-2 bars and now its 4-5 bars so I do see this new spectrum at work, but not where I live which is a bummer. Where my gf live (85338) its just as bad, maybe 2 bars/2-3 mbps even outdoors.

This is something I have called in about several times before and was finally told my area is considered 'marginal' which would have been nice to be told over the last couple of years instead of 'we are working on it'...kinda blows paying for service in an area for so long that never was going to work properly...or even at a level that makes it usable. I actually dropped to 1x this morning...while outside lol. Verizon may be good everywhere else, but not here...which is shocking because I am right on the border of Phoenix and near a huge university (Arizona State Univ) so I would expect coverage/bandwidth to be much better here.

Thanks for keeping us updated, ajnevares3!

I can understand your concerns with 4G coverage in your home area.  I see your 4G issue has been lifted up to our Network Engineers, and it was confirmed that validated events have been reported in your area.  Please know that Verizon Wireless radio frequency engineers and system performance engineers regularly evaluate network coverage and performance to identify required future enhancements.

In the meantime, have you considered use of a Network Extender http://vz.to/IHRT6h?  This will greatly improve your indoor 3G coverage for the time being.

It has been offered, but I do not have an internet connection in my home, which I believe it needed in order to use. Furthermore, settling for 3G coverage in an LTE area is unacceptable. Another trouble ticket has been opened today to prevent my line being turned off without the ETF (which was granted due to living in a 'marginal' area) but am skeptical a resolution can be found. I appreciate your willingness to help, but my area is a dead spot essentially, and do not see an immediate resolution.


We always want you to have the best service! The Network Repair ticket is the next level of troubleshooting to get this issue resolved. Our network engineers will find the best possible solution. Thank you for time and patience.

The network repair ticket was closed stating once again I live in a marginal area...one rep stating I live too far from the nearest tower and ping off a shared tower with another carrier, then another rep stated I live too close to the tower, being under the network signal? This is the type of inconsistent information I have been receiving for over 2 years now (been with Verizon for over 7 years) since moving to this area and experiencing far from acceptable coverage. I stayed with Verizon because of my discount(s), supports willingness to help and was told time and time again that my issues would be resolved with network expansion (AWS/XLTE)...but despite my patience, having many different flagships devices and performing every trouble shooting method known to man, the service/coverage has only gotten worse. Per the coverage map, I am blanketed by LTE but spend most of my time with one bar, and flipping between 3G and 4G. I have provided more than enough patience for Verizon and continued to pay top dollar for services only to receive a spotty, inconsistent, slow network in return. I am done...and am absolutely frustrated that not only I paid for service that rarely was up to par for so long...I now have a pile of ETF's that I must pay. I was talked into staying because I believed between network expansion and Verizon's self proclaimed dedication to provide the best wireless service would pay off, but now I am left jumping to another carrier, relying on the feedback of strangers to determine which carrier to try. I can now understand why so many people here in Phoenix have left Verizon...thank goodness for options. Thank you Verizon for all the effort put forth regarding my network issues but empty promises, an unreliable network and countless hours pursing a resolution that never existed has finally driven me away.