Mobile solutions
Home solutions
Have a phone you love? Get up to $500 when you bring your phone.
$500 via Verizon e-gift card (sent w/in 8 wks). Activation of 4G LTE/5G phone on 5G Get More plan req’d. Device must remain active for 45 days. $500 charge back if service cancelled w/in 12 mos or eligibility req’s are no longer met. See vzw.com/bring-your-own-device for details.
end of navigation menu
Help
Sign in
Turn on suggestions
Auto-suggest helps you quickly narrow down your search results by suggesting possible matches as you type.
Showing results for
Search instead for
Did you mean:
More Options
Correct Answer! Jump to solution.
AC791L randomly loses service

My AC791L Jetpack will randomly go from a strong signal (4 bars of LTE) to no service for several minutes. It probably happens 3-5 times a week at random intervals. No rhyme or reason why that I can figure out. It's been a problem ever since I got the device in July and persists still after the recent software update that came out a month or whatever ago.

Anyone else have similar symptoms?

Above results from field test mode and diagnostics taken from when the device was displaying no service. Logs were retrieved right after service returned.

> I don't think there is any technical rationale behind what you're suggesting, here.

Its not my objective to convince you of anything.  I am merely sharing the combined experience from everyone when using these devices in the field.  Jetpacks consistently perform poorer across the board than all other kinds of mobile broadband devices offered by Verizon when placed into a 24x7 connection scenario.

> but no one would tolerate a smartphone that randomly loses service in areas of strong signal for times of several minutes or longer...There is absolutely no reason a Mifi should be any different.

To name a few:

- A Jetpack is not a smartphone.

- People do not treat their smartphones the same way they do a Jetpack.

- A lot more development goes into a smartphone.

- Jetpacks tend to overheat with prolonged usage which attributes to poor performance.

- Jetpacks used to have weird temporary connection statuses built into them to help VZW manage bandwidth.  Not sure if the newer models still do this or not.  This was essentially a low power mode that would disrupt incoming connections when no or low activity was detected.

> I then powered off my laptop and left the Mifi on the dashboard of the car while I went inside to a meeting,

This is a known issue with Jetpacks.  Leaving a Jetpack on the dashboard of your car will expose the Jetpack to direct sunlight which often leads to overheating. An overheated Jetpack will perform poorly.  It is advised that you keep your Jetpack and a more stable environment such as a center console or glove box.  Cooling down a hot Jetpack often results in improved performance.

> When I returned to my car approximately 4 hours later

...Your diagnostic snapshot taken around here

The leaving the Jetpack on the dash of the car is a concern.  Perhaps something is burnt out on your Jetpack from repeated 24x7 usage plus battling the environmental conditions you have exposed it to.  The info captured here does not confirm an overheating situation at that time, but it is something for you to keep an eye on in the future.

If something is damaged as a result of overheating then contact VZW for replacement or upgrade options under your remaining warranty.  Considering you have documented receiving full LTE service in several areas but continue to have problem remaining connected a hardware failure of some kind should be considered by VZW as a reasonable solution.  Reference the info you shared here to avoid repeating yourself and speed up the support process.

Is the device configured to fallback to older cellular technologies when the desired technology is not working?

Sure it is… It shows the device behaving as expected, if the (cellular) network is down. The device could be at fault, but I bet you a dollar a new one will do the same thing. Until something else can explain different, I don't see how you read it as anything other than the network dropping out. I suspect VZW will recommend replacing the device, but me personally I'd have to see evidence of the device causing the problem and that log shows the device reacting to network conditions.

> Is the device configured to fallback to older cellular technologies when the desired technology is not working?

I actually did disable CDMA (it's set to LTE/UMTS/GSM). I will have to re-enable Global and see what behavior the device exhibits.The reason I disabled CDMA is that when I'm using the

The reason I disabled CDMA is that when I'm using the Mifi while traveling through an area of weak LTE signal, it is annoying when the device loses LTE, latches onto EV-DO (or, even worse, 1xRTT), and then will not "fall forward" back to LTE until the radio is idle (so, basically never). Since EV-DO and 1xRTT are so slow as to be virtually useless anyway, I'd rather have no service for a short time and then reconnect to LTE when signal gets stronger than to have it get stuck on EV-DO for lengthy periods of time.

However, I reiterate that the symptom I described in my previous post happens when I am stationary, sitting next to a Verizon tower with 4 bars of LTE (and probably a RSSI of like -50dB or something). It is not due to a loss of signal, unless Verizon is supremely unreliable and experiences network outages several times per week in multiple areas of the country (just in the past week, this has happened to me in California and in MIssouri and I've also had it happen in Texas and Pennsylvania and numerous other places.

I will turn CDMA back on and see what behavior the device exhibits, though, just to assuage everyone's curiosity. It still sounds like unwanted behavior from the device, though, whether it's that my device is defective or there is a firmware issue--it should be able to reliably maintain LTE connectivity when LTE signal is strong in an uncongested area.

> Sure it is… It shows the device behaving as expected, if the (cellular) network is down.

Well, yes, but that doesn't help to identify why the network is down. Either it's a defect in my device or a software issue with this product...or Verizon's network is supremely unreliable and randomly drops service multiple times a week.

We want to help make sure your device is in full working order. Please message us via either on Facebook or twitter so we can look into this in detail. -> http://on.fb.me/1WGfl3n

> I actually did disable CDMA (it's set to LTE/UMTS/GSM). I will have to re-enable Global and see what behavior the device exhibits. The reason I disabled CDMA is that when I'm using the

My device has Auto, 4G Only, 3G Only and 1X Only. With 4G Only, I see it dropout more than when in Auto where it can fallback. My device has no problem returning to 4G from 3G or 1X, but if it did I'd set it to 4G Only. This is likely a firmware issue with the AC791L and Netgear/Verizon needs to fix it. I'd complain to Customer Service (800) 922-0204 about it.

> Well, yes, but that doesn't help to identify why the network is down.  Either it's a defect in my device or a software issue with this product.

Such dropouts are out of my control and the only thing I can do is wait for it to resolve itself.

While less melodramatic, I think it is more accurate to say it fails enough to be annoying. The fact is VZW addresses such issues in the Customer Agreement:

We make no representations or warranties, express or implied, including, to the extent permitted by applicable law, any implied warranty of merchantability or fitness for a particular purpose, about your Service, your wireless device, or any applications you access through your wireless device.

> It still sounds like unwanted behavior from the device, though, whether it's that my device is defective or there is a firmware issue--it should be able to reliably maintain LTE connectivity when LTE signal is strong in an uncongested area.

In the world owned and operated by Verizon Wireless, the reliability of their cellular data network comes and goes. Hopefully, it doesn't get worse.

OK, so I finally had a chance to do some extensive testing today.

I turned the device back to Auto (4G/3G/2G all active) and used the device for several hours this morning on a road trip from Jacksonville, FL to Charleston, SC, all along the busy I-95 corridor with good, strong cell signal.

My device went to "No Service" for over one hour, from 11:03am to 12:40pm. During this time, I was both moving along I-95 (and other Verizon devices showed strong signal) as well as stopped for lunch at Dairy Queen in Richmond Hill, GA, again, with strong signal in the area.

As you can see by the log below, I reconnected to the Mifi at 12:39 and then at 12:40 discovered I had connectivity again. So it took almost two hours for the device to regain signal. (Normally, I would have given up long beforehand and rebooted the device, thus restoring signal.) Clearly this is not a network problem but rather something with the device or its firmware.

I've attached screenshots of the various diagnostic screens while no signal was reported as well as a full excerpt of the log from today. 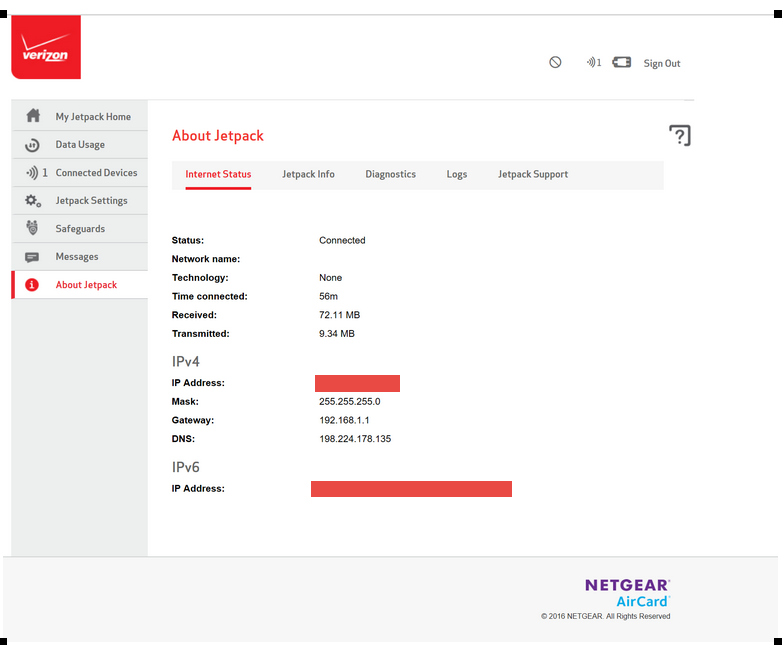 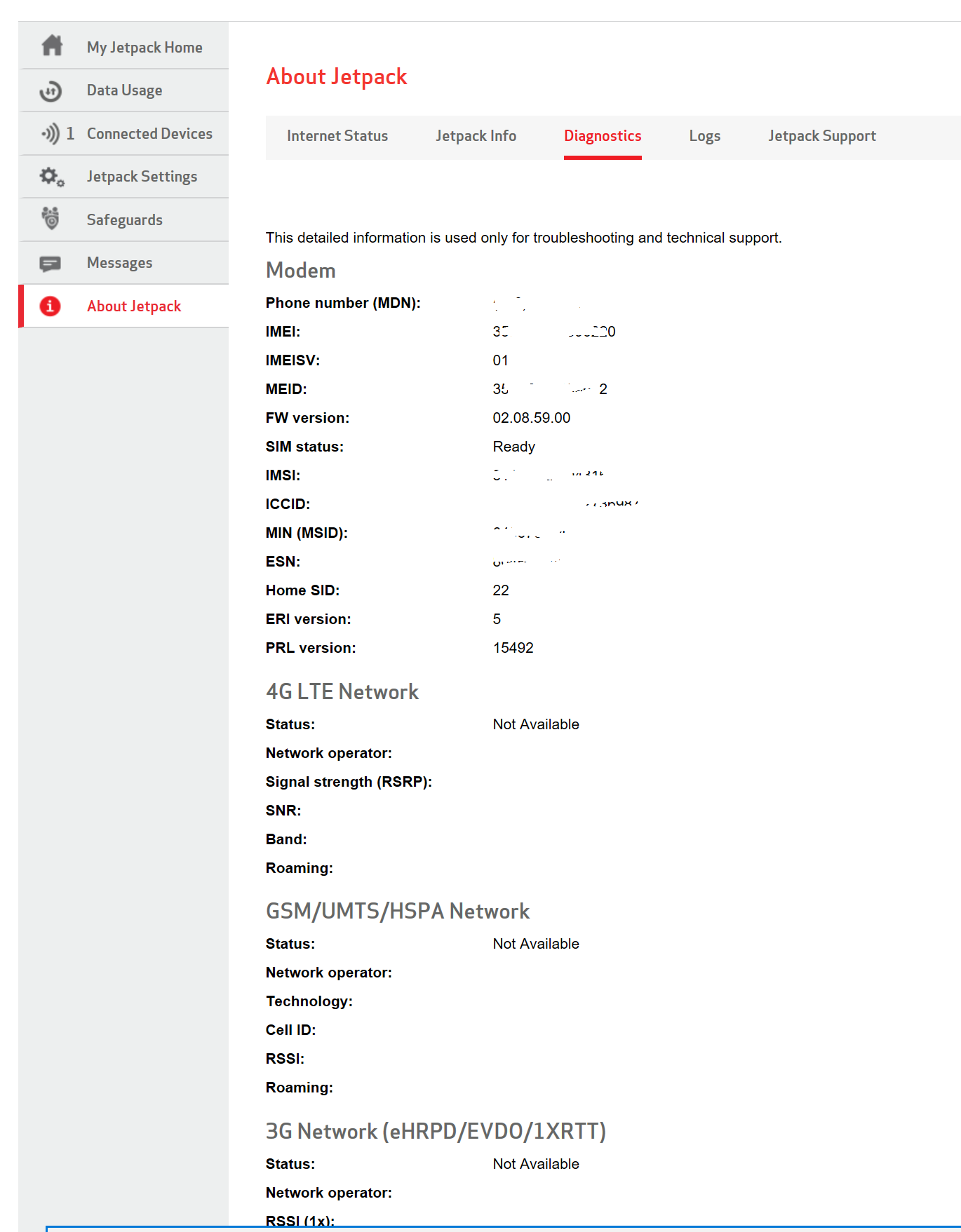 Does this behavior continue when IPv6 is disabled?

I have only had the jetpack for about a week and I have the same issue, only it happens randomly.  I use it on my farm and I haven't moved it at all for several days.  I don't notice the drops much because it is so infrequent, but if it is defective I would want to replace it before it is too late to return it.

Is this normal for these?

Wesquin, thank you so much for those details. I want to make sure that your device is working the way it should. Since you've had the device have you been able to power off the device and remove the sim card for 30 seconds, place the sim card back in and retry the connection? This link will provide you with those steps: https://www.verizonwireless.com/support/knowledge-base-178474/

Also, what zip code are you located in that is giving you these issues? Please keep us posted.

If my response answered your question please click the "Correct Answer" button under my response. This ensures others can benefit from our conversation. Thanks in advance for your help with this!!

Okay I have removed the sim as requested and powered the device back on.  All seems to be working so far.  I will have to give it some time and check the logs. Zip is 54154.

I will let you know how it goes either in a day or so if nothing happens, or as soon as anything shows in the logs.