Help
Sign in
Turn on suggestions
Auto-suggest helps you quickly narrow down your search results by suggesting possible matches as you type.
Showing results for
Search instead for
Did you mean:
More Options
Correct Answer!
Android Pay and new Wallet apps slowly rolling out 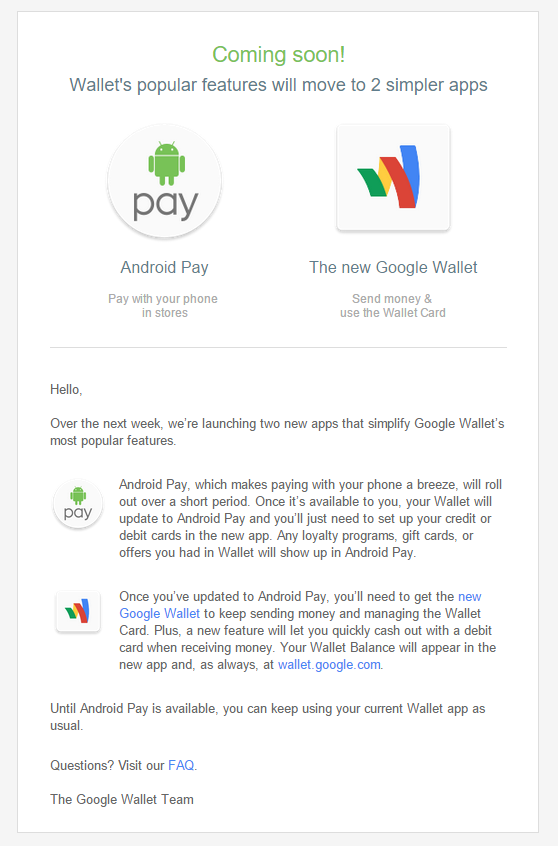 Tags (1)
I have the same question
0 Likes
3 Replies
Correct Answer!
Re: Android Pay and new Wallet apps slowly rolling out

Wallet is already out. Only pay isn't. Google hasn't rolled out the new framework(Google Play Services) yet.

I have the new Wallet, which looks very similar to the new Hangouts.  IDK why they couldn't have just renamed Wallet to Pay and integrated all functions instead of making Wallet a Google version of Western Union.  It seems to me that Wallet is just a money transfer tool with the ability to add money to the Google card.

I suppose, for someone who uses the Wallet app for tap to pay, that the only viable use if they never transfer money to other folks, would be to add money to the Wallet card for a backup/emergency purpose.  So with Pay taking over the debit and credit card function, Wallet may not be that useful for people outside money transfers and a prepaid Mastercard.

It would be outstanding if they allowed Google Opinion Survey rewards to be transferred from the Play Store account to the Google Card at least.

My wallets updated this morning.  Android Pay and Google Wallet.  I have noticed that to use AP you must have a screen lock of a PIN or Pattern otherwise the cards are automatically removed.  I like my swipe method and understand the security concerns here, since my phone has no fingerprint scanner.  Being so used to swiping, I almost locked myself out the first time, having forgotten about the pattern lock.