In-Store or Curbside Pickup: (excludes prepaid):
Same-day delivery: Same-day delivery is available in select areas.
Help
Sign in
Turn on suggestions
Auto-suggest helps you quickly narrow down your search results by suggesting possible matches as you type.
Showing results for
Search instead for
Did you mean:
More Options
Correct Answer! Jump to solution.
Re: LG Lucid Battery Issues???

Good afternoon!  I know battery life is something we want to see improve for all of the devices we offer, right? Have you downloaded the most recently software available? This was made available just a few days ago. Go to Settings> About Phone> System Update to get latest software. Keep me posted if you see an improvement on battery life.

I'm close to returning the phone based on battery alone.

I will give it another couple days though based on the following...

I noticed just now that if you're using any application and when you're done using you press the Home button, the application stays running according to App Mgr. However, if you press the Back/Return button, the application seems to close because it does not show in the App Mgr. I would hope/assume this would make a big difference so let's see what happens the next couple days as I give it a try, though it'll take some getting used to, especially since before this phone I had only used BB and iPhone and with those I would simply use the Home button and didn't have battery issues.

I didn't notice anyone else mention this so maybe some of you want to give it a try as well.

(and yes, I have the most recent software. updated as soon as I received the phone this week)

I have the LG Lucid and "Used" to be able to get almost 36 hours of battery life when I disabled 4G when I didn't need it. Then comes this past Tuesday and my phone gets a update that removes the ability to switch to 3G. Needless to say my phone got locked in 3G mode and would not switch to 4G. I had to factory default the phone which got me back to 4G but I can no longer switch to 3G and I now have almost no data access. My phone drops internet connection frequently and I have to refresh 10-15 times before a page will load. On 4G i'm luck to get 5 hours of standby.

I am about to take the phone back to Verizon and tell them to shove it!

I think everyone is ready to take this phone back and tell verizon to shove it.  My son has an I-Phone 4 and he is always using data - using in place of his ipod - and his battery lasts as much as 2-3 DAYS.  My phone that I am never on for anything, maybe making 5 calls a day and a few messages.  Sometimes checking something on the net (not to often), and I am lucky if my battery last 1 day.  I was having a issue that actually required Verizon replacing it with a "new"  phone - in less than 1 month I used 4gig - they said they never heard of that happening.  Never even went on the net or downloaded any apps.  The phone was actually eating itself.  So  now instead of having a brand new phone which I paid for, I have a "new" rebuilt phone.  Quite a scam Verizon has. Anyway,  I have found that if I turn off the data completely and only turn it on when I want to use it, the battery lasts a little longer.  Go to settings- Wireless Networks - scroll down to mobile networks and disable data.  It really has helped save the battery.  Another thing  to try is to be sure to NEVER try to go back to home by just hitting the home button, you MUST click the back arrow or whatever app you were using will still run.  One last thing, I purchased the portable charger (only cost 29.99) this is NOT a spare battery - it is a portable charger that you actually charge.  Has saved me more than once.  It fits most of today's phones. I can even charge my Kindle Fire with it.

Can't believe I am stuck with this piece of garbage for 2 years!  Hopefully Verizon will "Man-Up" and offer something.

Been trying it out and yes, not using the Home button and/or stopping all apps from the App Mgr are absolutely essential. Unfortunately doing so will still only get me a day or less. When I check Settings > Power Saver > Battery Use, it tells me the Display uses about 30% of my battery with Phone Idle and Cell standby around 17% each. Idle and Standby are when I'm not even using it and Display use is kinda hard to get around - I have to look at the damn screen, don't I??

Sorry, but you can't pass this off to "smartphones eat batteries".

It's bad enough I can't use the phone as I would like, but then to take 3 hours to fully charge up again is quite ridiculous. Charging a phone shouldn't interfere with that much time in my day.

I may end up switching back to a 3G phone, not the speedy 4G, but so what. What's the point of having quick speed if I can barely use any functions of the phone that utilize it?

Stopping running apps using the App Mgr may or may not be helping your battery life. It took me quite a while to get used to this, but Android manages memory very differently from a PC. It tries to learn what apps you use and keep them in memory; and it tries to keep memory full. Stop an app, and the system is likely to reload it, or load something else, using up battery. Counterintuitive for many of us, but apparently that's how it works: it does better if you leave it alone to do its thing.

and the detailed but very readable explanation on this Web page:

Wow.  I wanted to switch phones before the big June 28th data plan shut off.  Was choosing between the Razr Maxx and the iPhone 4s but the salesperson at Verizon convinced me to get the Lucid - smaller, not apple, 4g, etc.  I fell for it.  Went away for the weekend and was blown away.  Battery disappears with no usage.  I charged it to 100% overnight (before using)  by the end of the day it was below 10%.  I had checked Facebook once; tried to check email once - kept not verifying - and did use google navigation for roughly 15 minutes as we drove to a rural destination from the ferry dock.  Seriously?  I've had a smart phone for 5+ years.  My husband has had blackberry, iphone and now a windows phone.  We're not novices....and this is absolutely THE worst battery life experience I've seen.  I will return the phone, and take away either the Razr Maxx or the iPhone.  If it weren't for getting another 2 years of my grandfathered unlimited data plan I would wait to check out the Samsung Galaxy SIII, but can't stall past June 28th.  the Lucid is a joke.  It's relatively cheap, sure, but the total lack of a functional battery life makes it not worth even the low, low cost.  I am so glad I figured this out within 3 days!!!

Oh, and I forgot to mention:

On Friday night (the second night I'd owned it) I charged it to 100% and then unplugged it.  Did not touch the phone again.  In the morning the battery was down to 82%.  The only app I have added to this phone is Facebook and I had not checked FB during the night.  The freakin' battery is dissolving itself - 18% down by doing NOTHING.

I've had LG phones in the past (olden times) and they were great.  This one is not great.  It's barely functional until the battery issue is resolved.

Okay, so is there any battery I can buy for this phone that lasts longer than the one I have?

This phone essentially lives on a charger. If I forget to charge it that day, I am basically screwed. I often go on hikes with my dogs by myself. It's rather unnerving to have a phone so quick to lose battery power, especially when the battery is already low after not charging it for a whole day. To be stuck out there with a cell phone that goes dead so fast is rather pointless.

I don't have any apps running. I have all the settings turned off that I can...bluetooth, wifi, etc. I am not constantly on my phone. I use it for weather and phone calls mostly...occasional text here and there, but I'm not on it all that much really.

A full charge will go dead overnight. I use it as my alarm clock and have had several instances of it going dead overnight and me sleeping in. I've had to rig up a system so it can be on a charge next to my bed within reaching distance so I can turn it off when the alarm sounds. Then, when I go to work, I have to remember to connect it to my computer to remain charged because if I want to go anywhere after work, I will have a phone with a dead battery if it isn't connected to a charger all day.

I have great reception at work and home, so it's not like it's searching for a signal or anything. The battery just plain sucks. A whole day of not using the phone, at all, and it's still completely drained.

The low price tag and smart phone capabilities drew me to buy this. But now I'm starting to regret it. Might as well be a corded home phone.

The simple answers may not be correct. There's something else going on here. 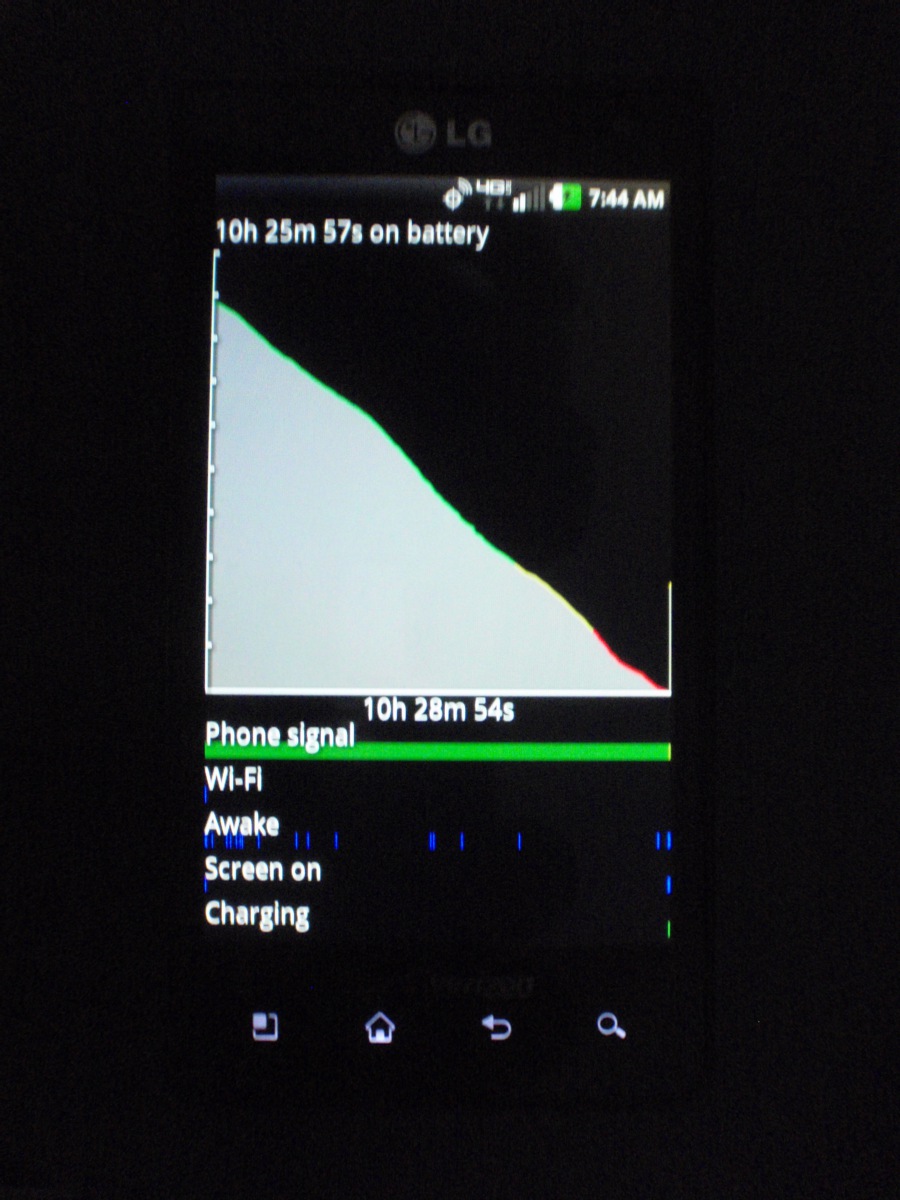 Notice the minimal activity, and that the charge continued to drop at about the same rate even with nothing going on. 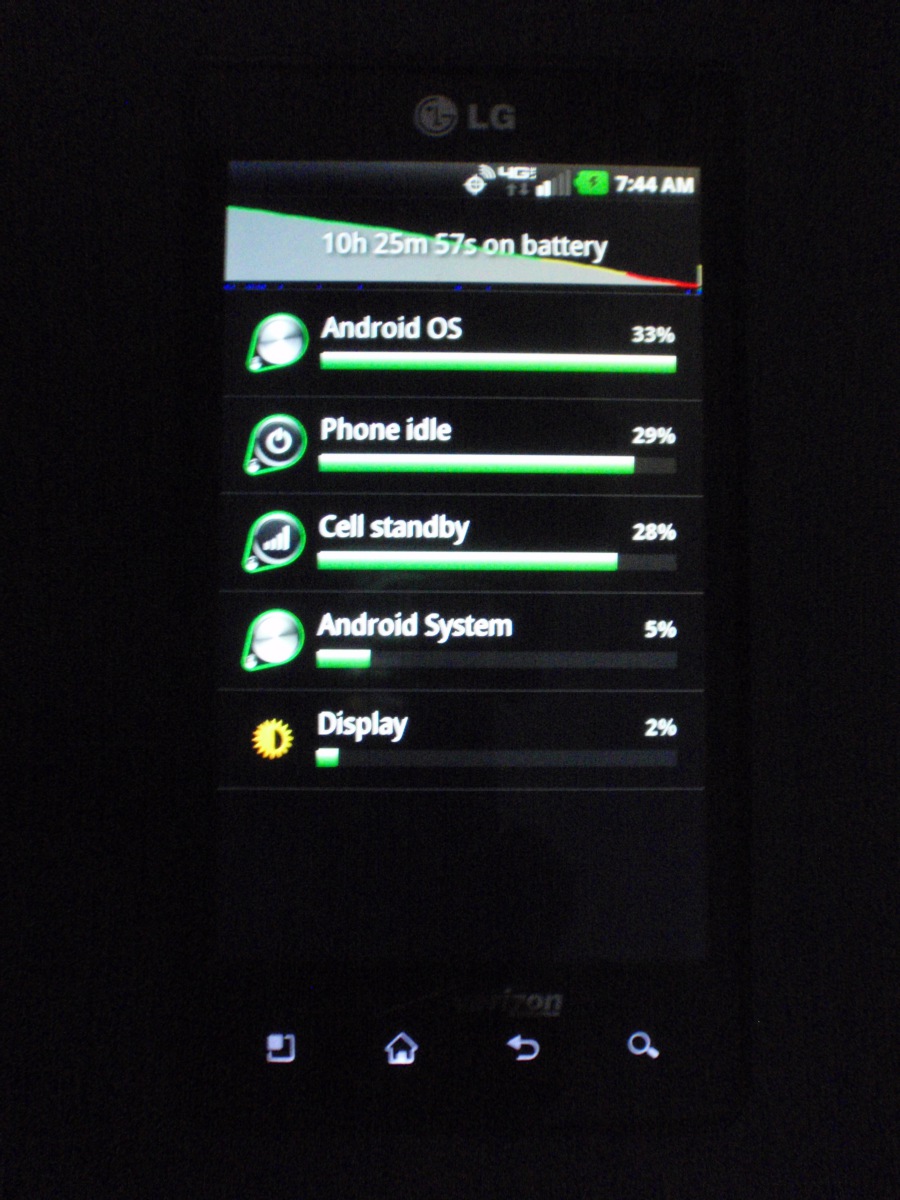 What changed? Mainly I installed and tried out a number of apps, mostly photo apps. I did change the power management settings to be a bit more aggressive, not that those should have come into play except that it might account for the minimal "awake" time once the battery level hit 30%.

After Android rebooted this morning, I had about 500 MB of RAM available, versus about 300 MB when I went to sleep last night (with 0 apps running). I got the battery charged up to 39% before I needed to run an errand, which was about half an hour long with the phone on standby (no Wi-Fi), same as overnight. When I got back and put my Lucid back on the charger, the charge level was still 39%. At the discharge rate from last night, I'd have expected about a 5% drop. So it doesn't look like it's a bad battery. What it does look like is that whatever sucked my battery dry last night was no longer happening after reboot.

My suspicion is that some of the apps I installed are starting services and leaving them running, and that at least one of those services is a battery hog. I'm going to be paying a lot closer attention to the services that are running, and I'll see if I can figure out which one(s) are causing me grief.

Added: I see that one reviewer of "QR Droid" says that it drains the battery even when not in use. That was one of the apps I installed yesterday, and I'm going to put it at the top of my list of suspects.