Help
Sign in
Turn on suggestions
Auto-suggest helps you quickly narrow down your search results by suggesting possible matches as you type.
Showing results for
Search instead for
Did you mean:
More Options
Correct Answer!
Software Update

On January 25, 2017 I received notice that the following update was available for my Moto Z Force Droid: NCL25.86-11-4-6.
I downloaded and installed update according to on-screen instructions. After installation phone rebooted and I received message that download failed and no changes were made to my phone and I can go to settings>system updates>check for system updates and re-download the update. When I attempted to re-download the software update, I received the following: 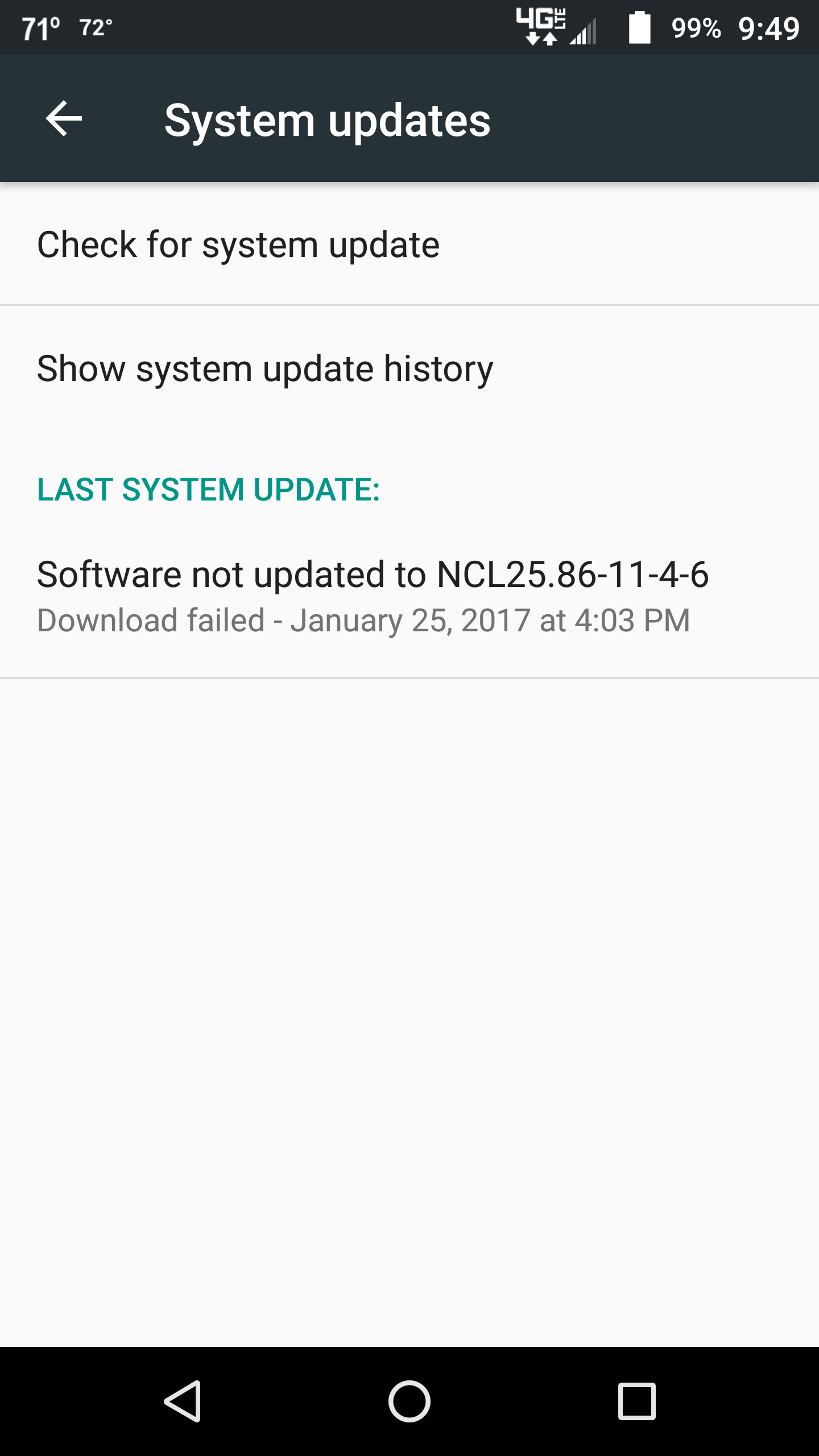 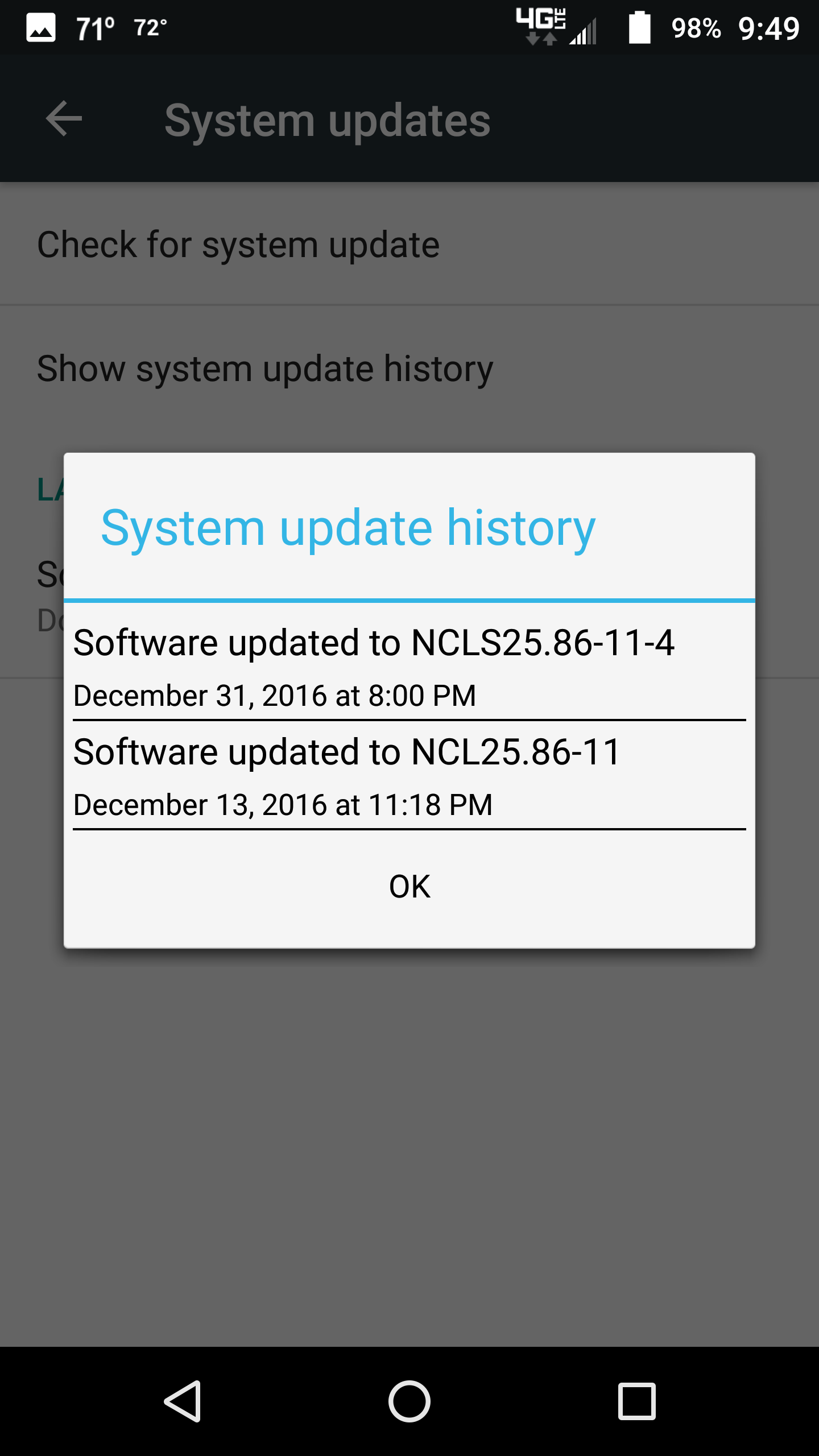 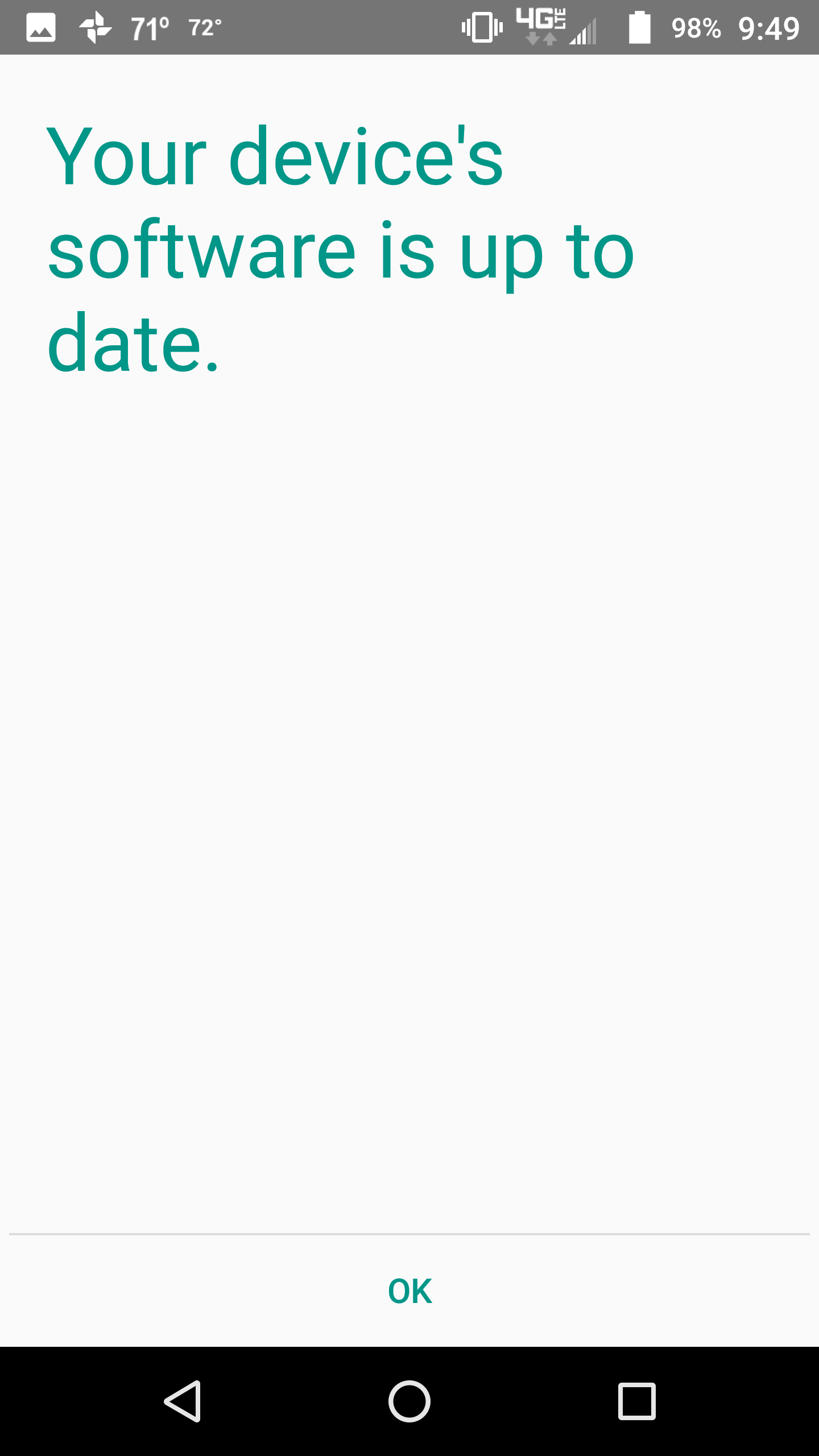 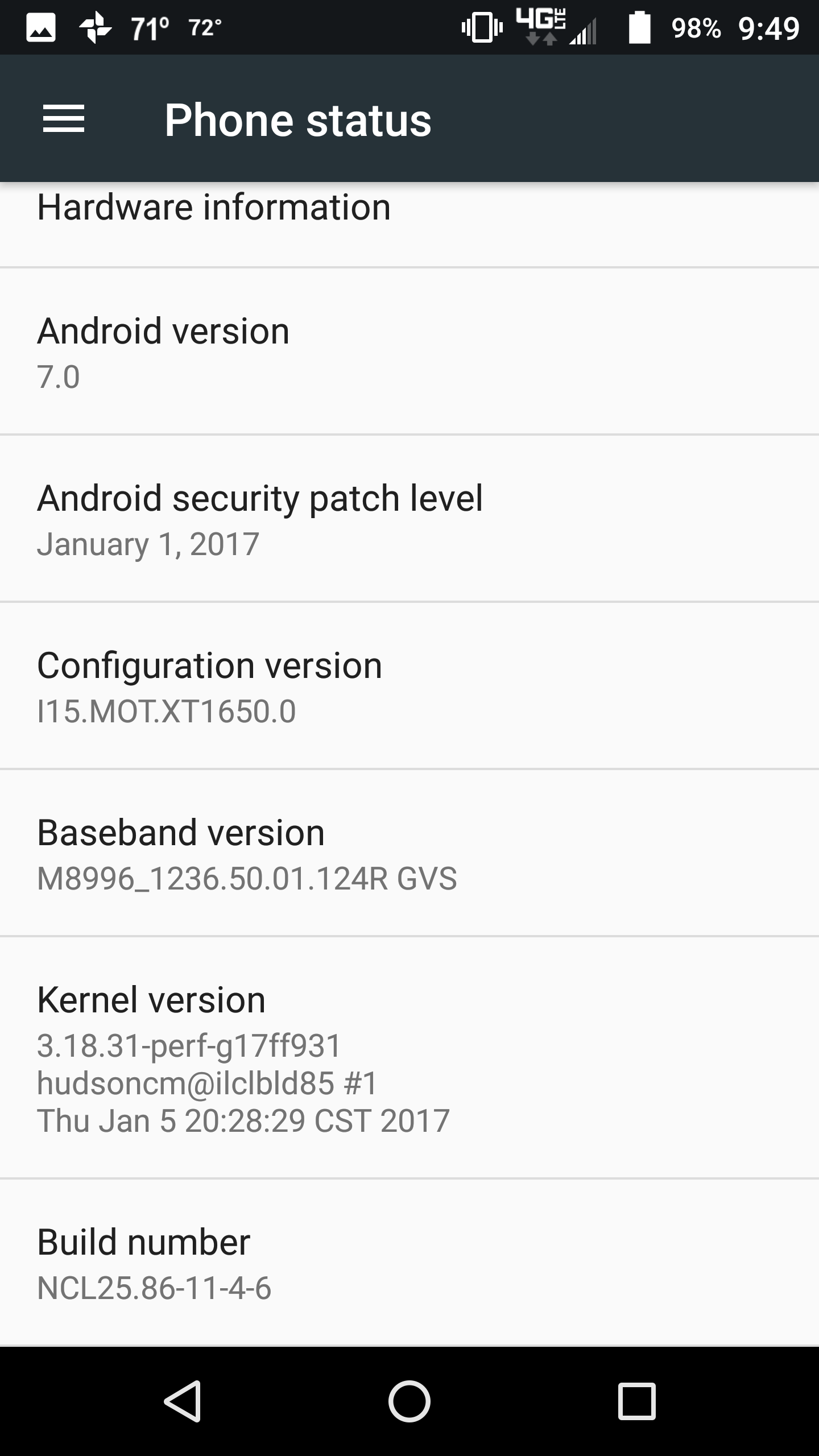 My question is how to get system notification (Last System Update and System Update History) in sync with the new build number so that it
reflects that the update was successfully installed. I have wiped the OS cache partition clear and the app cache clear (>settings> storage> > cache data) and nothing has changed. Any suggestions would be greatly appreciated EXCEPT FACTORY RESET.

JEFCLA57, we don’t want you to have conflicting information regarding your update. We will provide you with some troubleshooting assistance. If there was a problem with the update we recommend using the software repair tool. Follow the link for more information: http://vz.to/2hWcAlE

RalphT_VZW
Follow us on Twitter @VZWSupport
If my response answered your question please click the 'Correct Answer' button under my response. This ensures others can benefit from our conversation. Thanks in advance for your help with this!

The phone updated properly, however, it did update the system history file. My understanding is that the software repair tool uses USB 2.0.  My computer uses USB 3.0. That is a problem.

JEFCLA57, thank you so much for those details. Which step in the software assistant tool is causing you to have issues with the USB port? Did you get any errors when you try to follow the steps in that link?

KevinR_VZW
Follow us on Twitter @VZWSupport
If my response answered your question please click the "Correct Answer" button under my response. This ensures others can benefit from our conversation. Thanks in advance for your help with this!!

I have not used the Software Assistant Tool. According to the instructions regarding this tool, it states that the phone will NOT show up if using USB 3.0, that USB 2.0 is the requirement.

I am reluctant to purchase USB to USB C cable if this is the case as my computer only has USB 3.0 If this information is incorrect, then please post updated instructions.

The instructions to the Software Assistant Tool have changed. When you connect a Moto Z Force phone it gives you the option of installing Software Assistant Tool. There is NO Repair Tool associated with it. It checks current software and tells you its up to date. There is a Device Restore option which is supposed to allow you to reinstall latest software on server:  NCL25.86-11-4-6.

I downloaded software and system was caught in loop of Preparing to Install.  I called Verizon Technical support and they said uninstall and reinstall Software Assistant Tool. I did that five (5) times and still caught in loop. Spent over four hours (4) trying to reinstall software. Finally gave up. Tool does not work with my Moto Z Force. Any other suggestions?

Thanks for doing what you have done so far.
Since the software repair tool is not working, we need to reach out to our internal software team to determine why it is not updating.

I will send a Direct Message in order to get more details from you.

TamaraH_VZW
Follow us on Twitter @VZWSupport
If my response answered your question please click the "Correct Answer" button under my response. This ensures others can benefit from our conversation. Thanks in advance for your help with this!!