In-Store or Curbside Pickup: (excludes prepaid)
Same-day delivery:
Sign in
Help
Turn on suggestions
Auto-suggest helps you quickly narrow down your search results by suggesting possible matches as you type.
Showing results for
Search instead for
Did you mean:
More Options
Correct Answer!
Re: Why no LG V20? Sprint, Tmobile and AT&T have it. If you don't offer it soon, I'll be forced to switch.

I can tell you've done a lot of research on this topic, but let me clarify a few things for you. I am a little confused about how you repeatedly say that ATT, Sprint, and T-Mobile have offered this phone already, because that simply is *NOT* true. Yes, they may have announced the release date before Verizon, but the phone is *NOT* available on *ANY* of those carriors. In fact, you *CAN'T* even preorder the phone on Sprint until the 21st (after verizon), T-Mobile *JUST* opened preorders *TODAY* and ATT only recently opened their preorders, so *PLEASE* stop spreading this bogus information. Because, the truth is, the phone is going to be available to Verizon customers *SOONER* or at the very least, the same time, as the other carriors. Also, we're in the united States, so let's not bring up the completely useless and irrelevant information about the phone being available overseas (unless you plan on moving there because verizon too too long to announce the phone, hahhahahaa).

Secondly, if you are looking for information about non released devices, the store representatives are the *LAST* people to know about that. They don't get information on new things until a a few days before the release *AT BEST* The representatives on the phone are also among the last to know as well, so I must remind you to be patient in the future.

This is nothing new for carriors to keep us in the dark about new devices, but it does not mean they aren't working on things in the background. You expressed concern that there would not be enough time to prepare signage, Point of sale information, etc. Let me assure you that the people in charge of this are *NOT* the CS reps that know nothing of the new devices, and it does *NOT* take 3 months.

For the record, I'm not even interested in the V20, but I couldn't resist clarifying these things for you as your arrogance... Err.. I mean ignorance.... Err, I mean confusion was too much to pass up.

3 Likes
Reply
Correct Answer!
Re: Why no LG V20? Sprint, Tmobile and AT&T have it. If you don't offer it soon, I'll be forced to switch.

0 Likes
Reply
Correct Answer!
Re: Why no LG V20? Sprint, Tmobile and AT&T have it.  If you don't offer it soon, I'll be forced to switch.

I can tell you that when Samsung emasculated the Note 5 last year I bought a V10. I find it to be powerful yet quirky. If some of the V10's quirks have been addressed in the V20 I feel that it will be more than sufficient. The irritating thing is that after Samsung seemed to get the New Note7 right (it performs, for me at least, better than the first recalled model) I would have gotten the V20 too. I need two powerful phones for my purposes. I can't speak for anyone else but going forward into 2017 with a V20 and an S7 Edge should tide me over until next autumn when the deck's reshuffled yet again; not to mention what Samsung presents in the upcoming S8.

0 Likes
Reply
Correct Answer!
Re: Why no LG V20? Sprint, Tmobile and AT&T have it.  If you don't offer it soon, I'll be forced to switch.

That's provisionally encouraging; two days away as of this post.

1 Like
Reply
Correct Answer!
Re: Why no LG V20? Sprint, Tmobile and AT&T have it.  If you don't offer it soon, I'll be forced to switch.

Wow - Something happened. I woke up and it was January 2017. I have no recollection of Halloween, Thanksgiving, Christmas or New Years. By the way, who won the election? I tried to ask the Channel, but they said, Bye Bye Miss American Pie, I was by the levy drinking whiskey and rye... 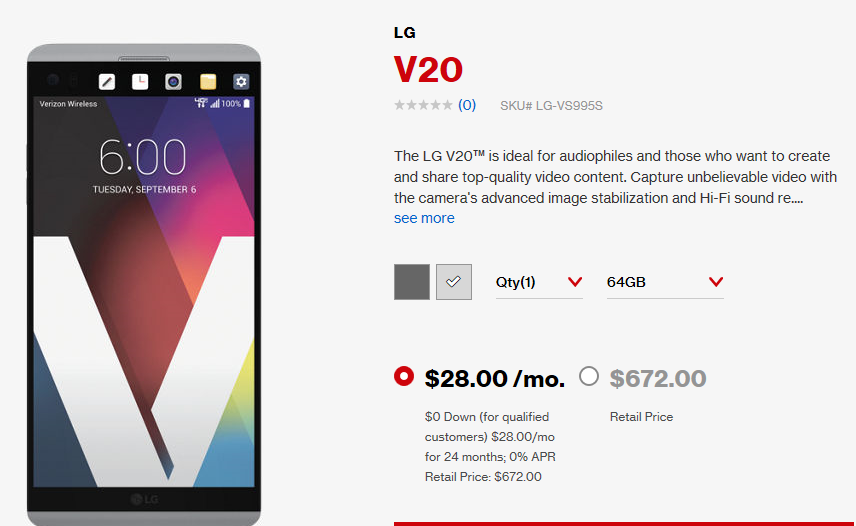 4 Likes
Reply
Correct Answer!
Re: Why no LG V20? Sprint, Tmobile and AT&T have it. If you don't offer it soon, I'll be forced to switch.

LOL! This thread never ceases to amuse me. Just another one of those types that can never be wrong. Probably a spoiled kid growing up, used to getting everything they want on a platter...

I just checked and the question is only "assumed answered", even after hearing it from Verizon himself. I bet you he will literally order the phone, wait until it arrives to his doorstep, take it to the verizon store to have them authenticate that it is the real deal, while they are under oath and hooked up to a polygraph before he concedes that the information was true.

3 Likes
Reply
Correct Answer!
Re: Why no LG V20? Sprint, Tmobile and AT&T have it. If you don't offer it soon, I'll be forced to switch.

Nice try, but as always, wrong.  I'll bet I am quite a bit older than you.  Retired from the U.S. Armyafter 23 years.  Two tours of Iraq, one in Afghanistan.  Now live in Hawaii. I may be impatient, but everything I own I have worked for.  Earned.  Grew up in a poor family in the midwest, never had anything handed to me.

In addition to my impatience, I have a low tolerance from snot nosed kids who think they know everything, have a condescending attitude, and make assumptions that have no basis in reality. But, haters gonna hate, so rage on.

1 Like
Reply
Correct Answer!
Re: Why no LG V20? Sprint, Tmobile and AT&T have it. If you don't offer it soon, I'll be forced to switch.

First of all, thank you for your service.

Secondly, I can actually be quite reasonable when I want to

. I actually agree with the sentiments you've expressed above, but you must not come across the same as the people you despise in order for that viewpoint to hold any weight, because that's all I saw from your earlier posts on this thread.

To be honest, the thing that really got me involved was the irony regarding the continued "the other carriors already have it remarks, and the difference between "they already have it" and "they have already announced it." Because that is literally a statement that "has no basis in reality." A threat to switch carriors holds no weight unless the other carriors actually have what you want. Att could have announced a year ago that they're releasing the LG V20 on October 27th, but that does not constitute "having it." The article you discounted that stated that Verizon beat the other carriors to the punch is literally valid because Verizon customers actually get their hands on it sooner, which is literally all that matters in this case.

1 Like
Reply
Correct Answer!
Re: Why no LG V20? Sprint, Tmobile and AT&T have it. If you don't offer it soon, I'll be forced to switch.

The problem with your reply is that AT&T, T-mobile Sprint, etc in the US, and carries in South Korea and Singapore all announced the availability before Verizon did.  AT&T started pre-orders before Verizon did.  That has been my point all along.  At least their subscribers knew what was going on.

My gripe all along has been the complete inability to get *ANY* information about the v20 until 3 days ago.

I am using a G3.  It is the third one, having exchanged the others for defects.  This one is defective as well, but since Verizon wouldn't let me switch my phone, I suffered with it until the Note 7.  Then I read about the batteries and the recall, and waited for the V20.

My whole point is that I feel that the ball was dropped.  Verizon should have announced their plans when the others did.  Doing so would not have cost them anything, and in fact would have helped customers like myself that don't want to settle for an inferior phone like the iPhone or the Pixel.

So, I will stand by what I said.  You, of course are free to disagree. That does not mean that what I said has not merit; it just means that you do not agree.

The frustration of having a phone that is barely limping along, compounded by the fact that competitors have announced their plans, was an exercise in frustration for me, and others like me who wanted simply to have an idea of when the phone would be available; this month, next month, whenever.

So, feel free to disagree, and even belittle, if you feel it necessary.  That doesn't make you right (or wrong), and it serves no purpose other than to argue something that obviously means little to you.

0 Likes
Reply
Correct Answer!
Re: Why no LG V20? Sprint, Tmobile and AT&T have it. If you don't offer it soon, I'll be forced to switch.

Agree, being left in the dark is not fun, but alas, there is a silver lining! Now you get the phone sooner, and for the almost $150 cheaper than the nearest competitor! Sometimes they just need a little time to get things right, instead of rushing the details and price point like the other carriors. Don't forget to pick up your free pair of headphones

and take advantage of whatever other promotions Verizon has cooked up.