Mobile solutions
Home solutions
Have a phone you love? Get up to $500 when you bring your phone.
$500 via Verizon e-gift card (sent w/in 8 wks). Activation of 4G LTE/5G phone on 5G Get More plan req’d. Device must remain active for 45 days. $500 charge back if service cancelled w/in 12 mos or eligibility req’s are no longer met. See vzw.com/bring-your-own-device for details.
Help
Sign in
Turn on suggestions
Auto-suggest helps you quickly narrow down your search results by suggesting possible matches as you type.
Showing results for
Search instead for
Did you mean:
More Options
Correct Answer!
WiFi calling purposely disabled on unlocked phones

I have a Motorola Stylus the first generation. We got my mom the same exact phone except through Verizon. Wi-fi calling works on her phone no problem but cannot be turned on my phone because it is "unlocked". Verizon should not put restrictions on "unlocked" phones that disable "features" like VoLTE and wifi calling. If I were to throw in an old Tmobile Sim card and enable it then the wifi calling features would suddenly be enabled on my phone. I actually had to switch my Verizon account from prepaid to postpaid so my "unlocked" phone can receive VoLTE! They make exceptions for flagship top model phones that are unlocked so they should allow these "features" on all phones that work with their network regardless if the phone was purchased from them for not.

Now that I activated an unlocked phone on a line I can't get any of the decent deals they have on a new phone. I luckily get decent 4g coverage in my house it's why I have Verizon but this option shouldn't be restricted just to force you to buy a phone from them. My phone works great and I would only consider replacing it just to get wifi calling but I really can't because I'd have to pay Verizon's full retail price on a new phone since now I have a line and can't get any discounts for opening a new line. Had they explained this to me they had this phone for only $5 a month at the time and I would have gotten it so I could get that ability. Unfortunate to have to buy my same model phone just to gain a function my phone is already able to do. My phone works inside my own house but doesn't inside other homes who I can connect to their internet. I just use Google voice to get around it as it will always work with an internet or 4G connection. Especially for postpaid customers all these "features" should be enabled regardless if the phone is unlocked or not. VoLTE should be automatically enabled for all Verizon customers pre or post paid. Their hostility towards unlocked phones is their own undoing. It drives people towards carriers that have more fair policies towards unlocked phones.

Basically I'm stuck with a phone that they want me to "upgrade" to get a feature my phone is already capable of and because I already activated the line I can't get anything from them at a decent price. Because they won't enable the "feature" on my line. Besides the phone works perfectly fine and I'm in no rush to change it out. Just annoyed by Verizon's policies towards unlocked phones.

I have the same question
1 Like
Reply
12 Replies
Correct Answer!
Re: WiFi calling purposely disabled on unlocked phones

If you had searched the forums before you bought an unlocked phone you would have seen the complaints.   Sone features with verizon don't work on unlocked phones.   I always search out features important to me before buying a device.

Wifi calling fully works on my phone. Verizon doesn't enable it to "punish" me for having an unlocked phone. It's not even a feature I need like I said my Google Voice number will work over either connection. Verizon shouldn't do this to unlocked phones just because we don't want to buy a phone full of their crapware which has to be removed. They could flip a switch and enable if they wanted to. Nothing is wrong with the ability of my phone to using the feature. You don't seem to understand but you probably have a flagship Samsung or Apple and paying $40 a month for it. That's cool.

I bought my phone on sale at best buy and plunked down $800 cash, didn't even use a credit card so I have no payments every month.   I tend to save up and do it that way rather than fight with verizon  over discounts on the bill and stuff for the phone.   I put a little aside each month so when I want a new phone I can pay cash in a few years.  Do the same for my husbands phone so we dont bother about bogo, less hassle.  I guess I don't understand about so many complaining wifi calling doesn't work.  What does the poster need to do to get it working?  Is it something on verizon's end?  Please explain.  Does visual voicemail work on unlocked phones?

So when verizon posts this about unlocked phones on their network it's not true? 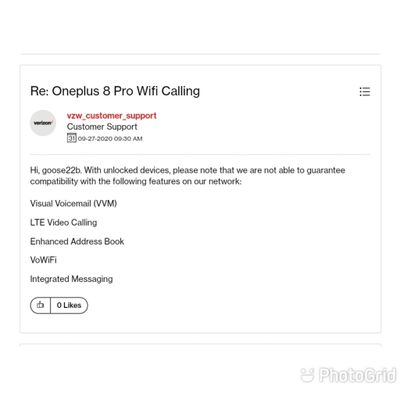 I totally agree and bought my cellphone in full directly from Motorola. I think insurance is a rip off also and you should only have a phone you can afford to replace (and have an older backup to use if you need a few months to put some cash together). I have never financed a phone before getting my mom her's when I added a line for her because $5 a month for two years is still below MSRP. They rarely have good phones for such cheap prices especially when you aren't opening another line. I can use Google Voice if I need digital calling of I'm not currently getting Verizon service and I have a good 4G connection at home so it isn't that important for me to get wifi calling. I just think it's lame they purposely disable it on our phones which would immediately work if they were to flip a switch. No they don't make any of that clear infact I ended up with a post paid account because I had moved and my phone calls stopped working and it took a lot of effort to figure out Verizon doesn't allow VoLTE for prepaid accounts. Well if they allow it for post paid accounts they should also allow this "feature". If having a "feature" disabled on your phone for the only reason is that the phone wasn't purchased directly by Verizon doesn't bother you that's cool. I think it's unacceptable for them to keep the "feature" disabled on our phones which are fully capable of doing it and can with other carriers. It just means I use Google Voice when I'm in an area with internet but bad cell reception. That's my work around. It's still unacceptable for Verizon so disable it on our phones. It works perfectly fine on my mom's phone which is the same exact model as my own. You can be cool with Verizon not being cool but I'm not cool with it. Also yeah I totally agree paying full price and avoiding adding to the bill is super important. I have my bill as low as possible and have turned off and blocked anything thay can add to it. Also by using Google Voice I forward my Verizon number to it and get free transcripted visual voice mail and from a better designed app.

That is correct. For sure VoLTE should be automatically enabled for all Verizon lines as all modern phones can use that feature but it's not also Verizon was supposed to retire their CDMA network years ago. As for wifi calling all I know is if I was to put in a Tmobile Sim card and activate it then the network would enable those features and I could wifi call from my phone. I'd need it because Verizon is the only carrier that has a decent signal in my area. It's a choice by Verizon to get people to buy phones only directly from them. If you have a prepaid account all the digital features are locked out of your account and if you have a post-paid account then they will allow you to have VoLTE but they choose to continue to block access to wifi calling. I have Google Voice which gets around that anyways but I shouldn't have to use a different number to make phone calls in areas with internet but no 4G reception.

It's a shame that Verizon made the decision to disable Wi-Fi calling on some of their customers' phones.  That can affect those customers' ability to make cell phone calls in certain emergency situations.  If Verizon refuses to resolve the issue, you have two choices:  1. Switch to a different carrier.  2. Or, it may be cheaper to complain to the Federal Communications Commission about it. (https://consumercomplaints.fcc.gov/hc/en-us).   They investigate complaints about service affecting issues brought to their attention.  If enough Verizon customers complain to the FCC about the issue, Verizon may decide to stop turning the Wi-Fi feature off.

Wish I had seen this sooner. Just spent 8 weeks going back and forth with horizon on why my new Motorola one 5G phone would not work with Wi-Fi calling. I work remote often alone in an area that has no cell phone service and only Wi-Fi. It is dangerous to disable this feature on unlocked phones

... with Verizon....  The additional $355.00 for the exact same model sold by Verizon I just laid out to enable this  feature is mice nuts compared to the countless hours spent on the phone trying to fix this issue.  signed  BEYOND FRUSTRATED