Mobile solutions
Home solutions
Have a phone you love? Get up to $500 when you bring your phone.
$500 via Verizon e-gift card (sent w/in 8 wks). Activation of 4G LTE/5G phone on 5G Get More plan req’d. Device must remain active for 45 days. $500 charge back if service cancelled w/in 12 mos or eligibility req’s are no longer met. See vzw.com/bring-your-own-device for details.
Help
Sign in
Turn on suggestions
Auto-suggest helps you quickly narrow down your search results by suggesting possible matches as you type.
Showing results for
Search instead for
Did you mean:
More Options
Correct Answer! Jump to solution.
kYOCERA dura xv missing windows drivers

I kept getting messages that there was an update for my phone...well.... I went ahead with that, and I don' tknow why, I see no benefit to doing this at this time.

However, now that I have done (the 5-10 minute update actually took nearly 2 hours, and multiple attempts, thank you) the update, my phone is no longer available to me on the computer.  I lost my iPod, so thought I would put music on my phone, why not? I have a 16GB SD card in it.

I am running windows 7 ultimate, my phone was detected and installed BEFORE the update.  I have it set to "ask on plug in" under tools and settings, and each time I plug it in, windows attempts and install, then fails to find a driver.  It is not native to Windows 7 on my machine (despite what the installation guide will say, to look in Root:\Windows\system32\... it doesn't exist there ). No drivers seem to exist on the web, nor on Kyocera website nor on Verizon website.   As my phone does not appear in "My Computer" I can no longer run the bootstrap program (whatever it is for....).     I have already removed it from device manager a few times.  It reappears, sometimes as an unknown device, sometimes as an unknown USB device, other times it is here as in the picture: 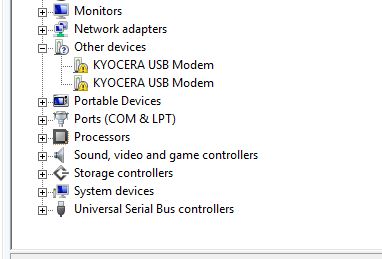 Where can I get drivesr that identify my phone in Windows 7x64?   Thanks

Labels (1)
Labels
Tags (3)
1 person had this problem.
I have the same question
0 Likes
Reply
1 Solution