In-Store or Curbside Pickup: (excludes prepaid)
Same-day delivery:
Sign in
Help
Turn on suggestions
Auto-suggest helps you quickly narrow down your search results by suggesting possible matches as you type.
Showing results for
Search instead for
Did you mean:
More Options
Correct Answer!
LIED to AGAIN! Last chance before the BBB and the AG hear about this whole mess

Now, on top of being lied to about the SE's not working at the end of the year, a myriad of other billing issues and HOURS of wasted time trying to get my account straight, I was just informed my "Switch Back Rebates" (which should have been BYOD Rebates) are now being denied.

The rep at the store sold me two new 6s' in place of my SE's (which were new / virtually new) because he said my SE's wouldn't work at the end of the year.  The BYOD promo was the only reason I was going to agree to go back to VZ direct and I DID NOT want to trade in my phones (first lie).   I was told that they couldn't do the BYOD since I was going to have to get new phones (which were to be "free" after billing credits (which VZ also tried to rescind and finally re-instated), but that I did qualify for the $400 Switch Back to VZ promo.  The manager on duty was also involved.

Someone finally straightened out my billing as far as the phone credits (sort of , I really just wanted two new SEs back, so I'm not stuck with these 6s) but this is absolutely ridiculous!  Don't tell me to go see those bunch of LIARS at the VZ company store.   FIX THIS - GET ME MY REBATES ISSUED NOW - NOT IN ANOTHER EIGHT! WEEKS!!!  (And not with billing credits I have to use up  - I want the Visa cards so I can pay off these 6s and be done with this nightmare.

I have the same question
0 Likes
9 Replies
Correct Answer!
Re: LIED to AGAIN! Last chance before the BBB and the AG hear about this whole mess

Thanks, but way too many hours with them on the phone already.   Want someone to FIX this, not get stuck on hold, get cut off, explain everything all over again.  Last two calls (of DOZENS) were an hour and a half each.  Someone needs to do their research, FIX this and get back to me. Thanks anyway.

I know what it’s like to begin at the beginning multiple times, and we’ll do our best to lend a hand here. The first detail we need is the status of the rebate.
What do you see when using the “Check My Status” link here?

Tired-of-the-games
Member
Thank you for getting back to me.   I thought you were the person from "chat" this morning, but I cannot "reply" to your e-mail, so I am writing here.  Both rebates show the same info.   I just want what what I was promised.  The rep who waited on me, the rep who helped me when I went to return the phones and also another rep all acknowledged that I was indeed to get the rebates (despite the wording regarding the purchase price of the phones).  Of course the also sold me those phones under false pretenses and now I want to dump the 6ses and re-purchase iPhone SEs.
I had VZ for 6-7 years or so,  but switched to another carrier due to paying for more than what I was using.  My service with the new carrier wasn’t good and I was looking into options when I saw the rebates and figured they would help make up for VZ’s higher cost.  Switching back has been a horrendous nightmare, this is just the absolute last straw.  I want out from under the 6ses and this contract, so I can buy SEs and not have VZ pull any more surprises .   ( I started making a list for my BBB letter if you want a copy. )
Thank you again. 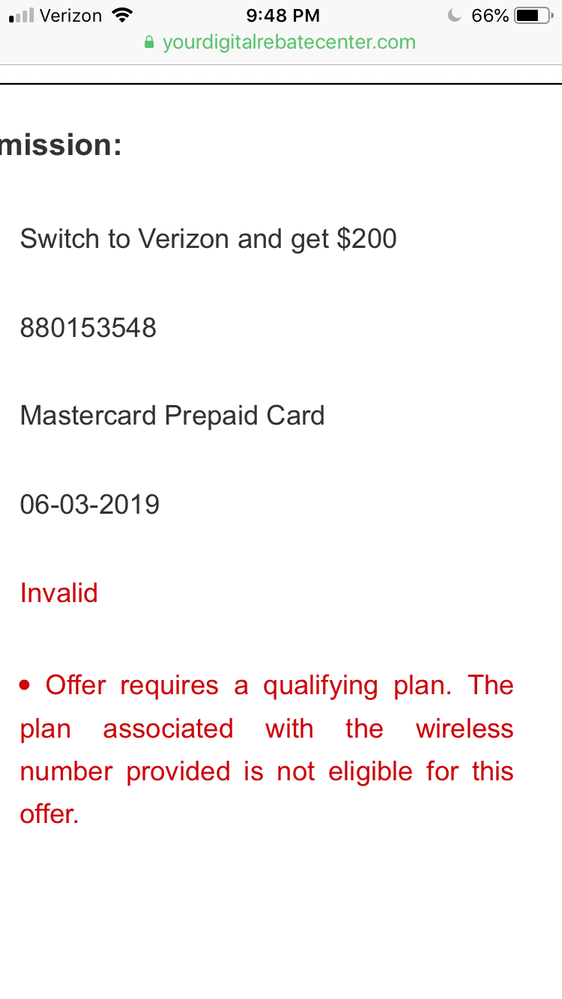 0 Likes
Correct Answer!
What Is Going On??? No Response - No Rebates! Needs Resolved NOW!

This is your last chance.  I have been waiting for my rebates that I was promised.  I sent information regarding most of the billing issues that I have experienced since I switched back.  You have had time to research my account and get in touch with me.  Now I've had more than enough of the lies and getting blown off.

Verizon owes me two of the "Switch Back" rebates at $200 each.    I also want to return the iPhone 6Ses I was sold and asked to keep under false pretenses and contract cancelled with NO further billing / financial obligation incurred regarding the 6Ses so I can re-purchase iPhone SEs (which I was tricked into trading in and entering into a contract).  I want this IN WRITING as nothing Verizon says can be trusted at this point.

I have no more time to waste on this matter.  My next contact will be the BBB and then the Attorney General.  I am done.  If you want to contact me by phone, you may leave a message, but I want the follow up and this resolution IN WRITING.

Thak you for your PROMPT attention to this long overdue matter.

Just an FYI, unless you are gone 60 days, you are not new customers/not new numbers.  Typically that invalidates any offers to switch and get a prepaid visa for bringing “new” line to the carrier.

Either they need to train their employees better or teach them not to lie to customers to get sales...

Either they need to train their employees better or teach them not to lie to customers to get sales...

As long as comissions exist, fat chance. I have several friends who take those calls. Real nice for them to get screamed at while a store rep gets a kicker on their check. Hey VZ Corporate, fix that hot mess!

Sorry to hear your friends are getting screamed at... that is not acceptable either.   Unfortunately it does confirm that misleading / deceptive practices are common in Verizon's stores.