Get caught reading these science fiction novels in May! 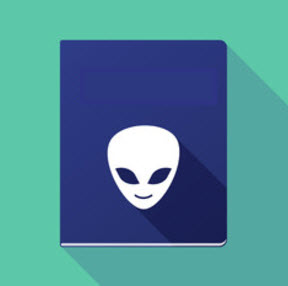 Science fiction: the final frontier in literary genres. To explore sci-fi is to explore a world unlike your own. Whether your adventure takes you far across the galaxy or down to the deepest depths of the oceans, science fiction writers have the ability to transport you there safely without you ever having to leave the comfort of your couch. Being able to get completely immersed in a novel means the writer has done their job to not only entertain you, but allow you to harness your own imagination. Therefore, I have decided to share my three favorite science fiction novels in hopes that you will feel inspired to stop by your local library, order one online, download it on your Kindle, or even give it a listen through Audible. No matter how you get your literary fix, be aware that May is national get-caught-reading month! For this reason, I implore that you don’t let this month end without reading a new book or two!

Flowers for Algernon - By Daniel Keyes

Don’t be fooled by the cute mouse on the cover because this might be the saddest novel you will ever read. Although this novel doesn’t take place in a far away galaxy, (actually it takes place in Brooklyn, New York) you are introduced to a brand new world. Charlie Gordon’s world to be exact. As a 32 year old man with the IQ of 68, Charlie often comes under ridicule for his child like outlook on the world. In hopes to improve his life, Charlie agrees to be a test subject for a new surgical technique that will increase his intelligence. This test had already been successfully tested on Algernon, a lab mouse, and like the mouse, Charlie triples his IQ. Unfortunately, intelligence only seems to complicate Charlie’s life and he starts to spiral out of control.

Flowers for Algernon is told through a series of journal entries written by Charlie, allowing you to connect to the protagonist on a personal level. If you decide to embark into Charlie’s world, be prepared to feel a wide range of emotions.

"Everything was beautiful and nothing hurt." Although you will find that quote nestled among the pages of Kurt Vonnegut’s Slaughterhouse 5, you will have a harder time finding the meaning behind it. Could it be in reference to the moments in our lives that truly make life worth living? Or simply an ode to the moment we enter into the great beyond? In order to better form an opinion, I strongly suggest you give this science fiction novel a chance.

The story is told in a nonlinear order from a narrator who is anything but reliable. Through the words of this narrator, you learn more about the life and story of Billy Pilgrim, an American soldier fighting in World War II, who has time travel experiences that are out of his control. From fighting on the front lines to being transported to a planet in a faraway galaxy, Billy’s life story is one big puzzle that needs to be rearranged in order to be understood.

Think back to when you were in school. Were you forced to read Geoffrey Chaucer’s The Canterbury Tales? If you went to college for English, then you would have read this book multiples times and in some cases, you might have even read it in Middle English. (“Whan that Aprill with his shoures soote - The droghte of March hath perced to the roote …”) No matter what your opinions are of The Canterbury Tales, it’s hard to deny that the stories being told throughout the journey were entertaining. Now what if I told you Hyperion by Dan Simmons was essentially the space equivalent of The Canterbury Tales? Would you give it a read or would you run for the hills?

Set in the 27th century, this sci-fi novel follows the journey of pilgrims on their way to a distant planet, Hyperion. During their journey, the pilgrims share stories to pass the time and to share with the others why they have embarked upon such a journey. From tales of woe to a shared hope for a positive outcome, Hyperion will keep you entertained from the very first story.

So you've read my reviews about three of my favorite sci-fi novels and now I'd like to hear from all of you! Have you read any of my recommendations? If not, then what book or genre would you recommend?