Mobile solutions
Home solutions
Get up to $500 when you bring your phone. Plus, waived smartphone activation fee when you buy online. Limited time offer.
$500 via Verizon e-gift card (sent w/in 8 wks). Activation of 4G LTE/5G phone on One Unlimited for iPhone (all lines on account req'd on plan), 5G Do More, 5G Play More or 5G Get More plans req'd. Device must remain active for 45 days. $500 charge back if service cancelled w/in 12 mos or eligibility req's are no longer met. See vzw.com/bring-your-own-device for details. And for a limited time, we’ll waive your activation fee when you order through vzw.com or My Verizon app. You’ll see the one time charge waived as your “Due Today” amount at checkout.
end of navigation menu
Help
Sign in
Turn on suggestions
Auto-suggest helps you quickly narrow down your search results by suggesting possible matches as you type.
Showing results for
Search instead for
Did you mean:
More Options
Correct Answer! Jump to solution.
Google Play services massive battery drain

Anyone else with a Droid Mini experiencing massive battery drain recently that appears to be due to Google Play services?

In the past two weeks Google Play services has been often consuming 50% or more of the battery causing the roughly a 10% to 20% loss of battery per hour. This massive battery drain sometimes goes away for a short time if the phone is turned off then back on a few minute later, only to have the battery drain return a short time later.

Tried a hard phone reset.  Phone battery drain back to normal until Google Services updates itself to Google Play services at which point the massive battery drain reappears. 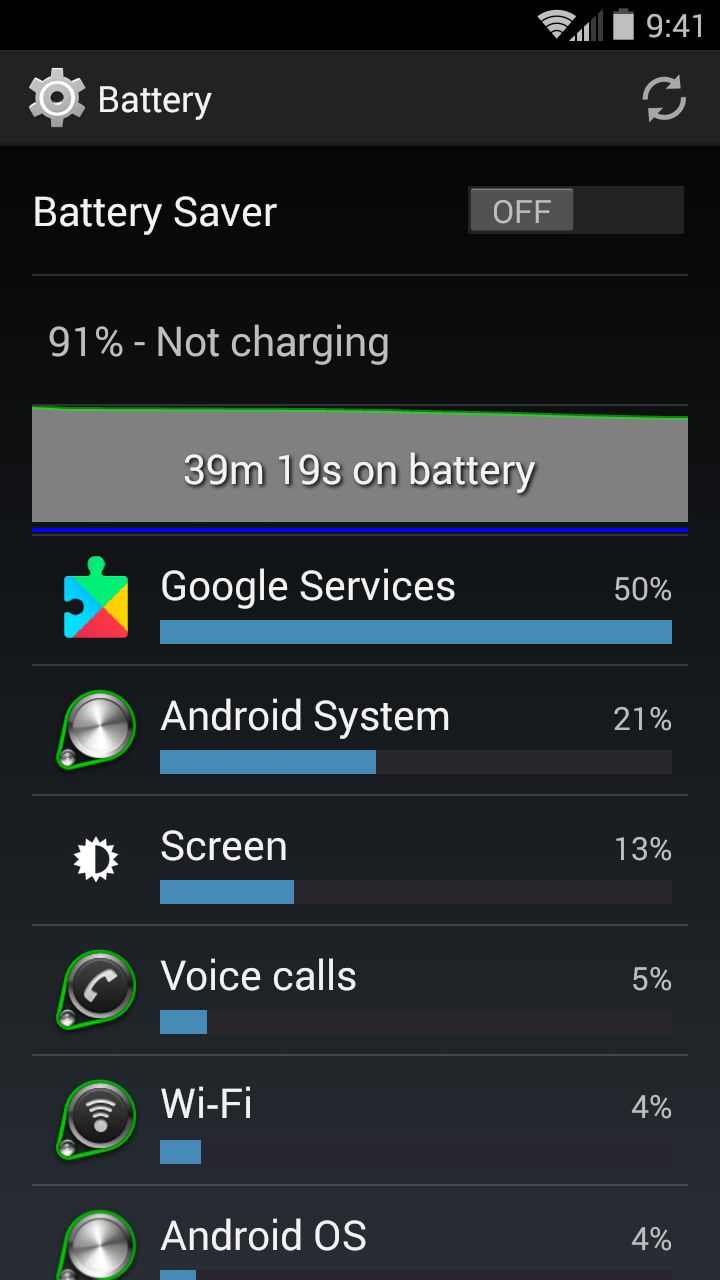 I have the same question
0 Likes
1 Solution

The phone is beyond the Motorola 1 year warrantee being that the phone was purchased on 2/9/2014.

What I may have to do is do another hard reset and simply prevent the Google Services app from updating and deal with any apps that won't run without an updated Google Services app and wait to see if Google will get around to fixing this issue (high battery usage) is affecting others after seeing the various complains in the apps's comment section in the Google App Store.

I have another five screen captures from today that I'll post to a separate reply.

35 minutes after unplugging the phone doesn't give a lot of information about the battery drain. A screenshot taken closer to empty yields more information.

Of course after several hours at 50% the Google Services battery usage has dropped down to roughly 24%. Far cry from what was happening a few days ago prior to a hard reset and then yesterday after a second hard reset. Still drawing more on the battery than it was a few weeks ago (prior to the June 22 Google Services update) however where it was consistently under 10%.

That is what has made this so frustrating. There are days where I have to recharge the battery twice even though I'm not using the phone all that much (maybe a few texts and one short call) versus other days where I can go two days before the phone has to be recharged. When the high battery drain happens its like the Google Services program gets into a stuck always on state and consumes the processor which then consumes the battery. When it happens the battery gets noticeably hot (even when the battery is being recharged) and the phone gets sluggish. Sometimes shutting off the phone works, sometimes it doesn't.

I'm experiencing this same problem on my Droid Mini. I haven't tried any fixes yet. Please let us know if you get anywhere with it...

After a hard reset the phone has to re-optimize the applications and figure out which ones are to stay in the RAM for quick recall. It can take a few days to figure out your usage pattern modify its resources to compensate.

It might be trying to update something in the background and can't because of a settings or your quality of signal in the days after the reset.

Have you looked at the details of the battery usage for the Google Play Services?

It is hard to know what if any fixes actually work. Sometimes just rebooting the phone seems to help. Other times a full hard reset seems to work. Here are some of the other web pages (some pages were for specific phones) I've looked at and tried many of the suggestions:

Anyone else having Google Play eat their battery? - Android Forums at AndroidCentral.com

Some of the suggestions are common sense and obvious others not.

Again this morning after fully charging the phone Google Services jumped from 4% to 39%for the half hour or so I've been checking it .

The Google Services battery drain kicked in again yesterday and was able to capture the screen captures below. The phone was charged to 100% and was rarely used yesterday. No phone calls were made, some light web browsing via data was done more than 7 hours prior to the screen captures being taken, some texting was done as well. At some point the Google Services kicked in to high gear and its battery usage went from under 10% to over 40% and appears to have stayed there causing the quick battery drain. There is a real drop off in the battery where it went from 14% to 2% in the space of about 30 minutes at the end.

I do appreciate all you have done Bennor3814. May I ask when you did the reset did you reinstall all your applications?

AmberF_VZW
Follow us on Twitter @VZWSupport
If my response answered your question please click the �Correct Answer� button under my response. This ensures others can benefit from our conversation. Thanks in advance for your help with this!!

At first, no. I left it stock and ensured that it didn't install any of the prior apps that I had installed to the phone. The phone worked fine for a short time, then it upgraded the various stock Verizon/Android modules and apps on the phone. It when the Google Services was updated that the problems started. Prior to the Google Services update that apps usage was under 10% (often under 5%) and there didn't appear to be a significant battery drain happening. Post Google Services update is when the intermittent battery drain starts. About 20 minutes after Google Services was updated the app's battery usage jumped up to around 34%, about 20 minutes it lowered slightly to 30%. when I checked the phone several hours later Google Service battery usage jumped up to 50% and stayed there for several hours before dropping back to around 30%.

The next day I reinstalled several of the Apps I normally use, not all of them just the core apps I use most and haven't reinstall the remainder since. Here is a list of currently installed apps other than the Google apps, Verizon apps and a few others that were on the phone when reset:

SMS Backup & Restore and it's Add-On SMS Backup and Restore

I'm taking periodic screen shots of the battery screen today and Google Services is in the 50% range consistently with 53% battery left after 6 hours and 38 minutes on battery. Android System is next on the battery usage list at 20% with the Screen at 3rd with 10%. Wifi and location are both on, Data however is off.