$899.99 (128 GB only) device payment purchase or full retail purchase w/ new or upgrade smartphone line on One Unlimited for iPhone (all lines on account req’d on plan), 5G Do More, 5G Play More or 5G Get More plans req’d. Less $899.99 promo credit applied over 36 mos.; promo credit ends if eligibility req’s are no longer met; 0% APR. Excludes Verizon Prepaid plans.
end of navigation menu
Help
Sign in
Turn on suggestions
Auto-suggest helps you quickly narrow down your search results by suggesting possible matches as you type.
Showing results for
Search instead for
Did you mean:
More Options
***Announcement: We’re excited to inform you that we will be merging the Fios and Wireless Communities to a unified Verizon Community with a new look and feel throughout. If you are interested in what specifically has changed, please see the New Revamped Community article under the Featured Topics.***
Correct Answer!
Samsung APP that may help save battery usage

I just found an APP that came with your phone and it shows you how many APPs are currently active.  It is very easy to erase/delete if you don't like it.

Go to your home screen and hold your finger on it until the "Add to Home Screen" comes up.  Then touch Widgets.  Go down the list of items to Program Monitor by Samsung and touch it.  You will then see a new ICON called "Active Applications" on your home screen.  It tells you the number of applications that are active and therefore may be using battery power.

I placed it next to the ICON "Task Manager" (see attached screen capture) so I could easily touch Task Manager to turn off any or all Active Applications (EXIT ALL) that I choose to in order to save the phone's battery.

By the way if you do not like it just hold your finger on it and drag it down to the Remove Trash can.

PS...Recently I have found out that when you leave an APP using the home button, instead of the BACK button, SOMETIMES the Active APP icon on the home screen becomes RED colored and there is a message displayed saying that that battery is being used because the APP is still running.  Most of the time it goes off in a second or two but today it stayed RED and the message scrolled by a couple of times so I touched the Active APP icon and saw which APP it was and closed it.

I have the same question
0 Likes
10 Replies
Correct Answer!
Re: Samsung APP that may help save battery usage

also, long pressing the home button will bring up the task manager as well

By using this APP I discovered that when it shows that one or more APPS are active (the number 1,2,3, or higher will be showing), if you long press the APP it goes directly to the same place Task Manager takes you so you can Touch Exit All to shut them down and hopefully save you battery.

I think you should read this blog post. http://www.androidcentral.com/ram-what-it-how-its-used-and-why-you-shouldnt-care

Thanks for the post.  The Article was a bit confusing to me because it discusses saving RAM, not conserving battery power (save battery AMPS).

Months ago I read that when you leave an APP if you press the HOME button to leave the APP it is still running (active) BUT if you press the BACK button (U-turn symbol) first it will shut down the APP (no longer active) and this can save your battery.  To read about this touch Task Manager and slide the four tabs at the top of the next screen to the left to see HELP.   Next touch help and read item one.

For now I want to keep trying it but thanks for the blog URL and for thinking of me.  Who knows I may delete the APP at a later date.

That active application widget in your attached image was the reason why that post was written. It isn't about saving RAM. You want the RAM filled with the applications that you use, active or not. By killing your applications, your can actually reduce your battery life because as soon as the RAM has space, the android OS will fill it with the application that it think you are most likely to use next.

Here's my interpretation.  Based on what Samsung said when you touch Task Manager and slide the four tabs at the top of the next screen to the left and touch HELP to read Item 1 re saving on battery usage.  Then in Item 2 Samsung refers to these Active Applications as "Currently Running" so maybe they are consuming an"Itsey Bitsey" (this is my own technical term) amount of battery power.  Possibly Active/Running Applications consume battery power whereas Background Applications do not (who knows).

If my RAM is filled with Active APPS, Samsung must think that there MAY BE some battery usage to support these Active APPs (Active is the key word).  BUT, on the other hand, if I make them inactive by touching Exit All and Android OS adds other APPS of its own choosing that are NOT Active there probably will not be additional battery usage to support these in-active Background APPs.

I'll read the post again because now I wonder if when I go to Task Manager>Active Applications TAB and touch Exit All does this completely remove  (purge) the APPS from RAM or does it make the APPs inactive and they still reside in RAM in BACKGROUND in an inactive state?  I say this because it seems odd that Android OS could put APPs of its choosing into RAM and keep them in an active state.  They must be in BACKGROUND and hopefully NOT using any battery power.

I read it again and it does not touch on the battery consumption by active or background APPs.

Oh well it sure would be nice to have Jerry Hildenbrand, the fellow who wrote the original article, comment on battery usage.

This is what my active app look like as well as how my RAM is assigned.  The RAM is full.  I never kill applications and I use the home button all the time to switch to the home screen without backing completely out of applications. 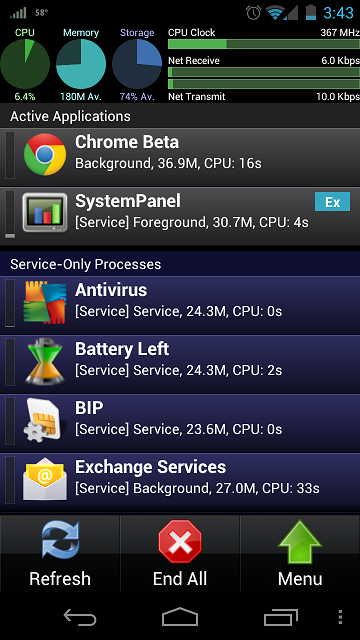 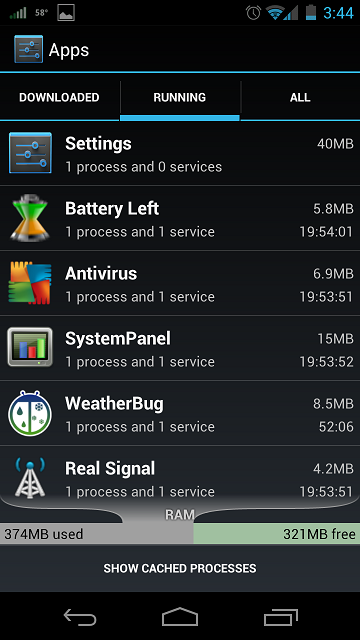 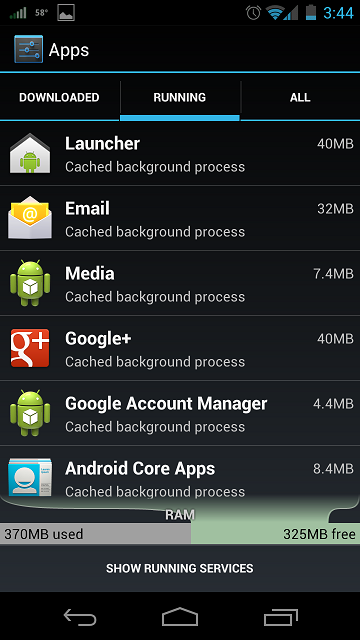 How do you get to your Active APPs???  I'll look at mine.

I use System Panel (paid version).

Here is a link to the free version.