Help
Sign in
Turn on suggestions
Auto-suggest helps you quickly narrow down your search results by suggesting possible matches as you type.
Showing results for
Search instead for
Did you mean:
More Options
Correct Answer! Jump to solution.
Google Pixel XL 128 GB won't download Jade Empire. Only me?

I own 5 Android based devices (1 Pixel XL,1 LG G5, 1 Asus Z10, and 2 Kindle Fire).  Two of these devices have my account info on them and the rest are used by family.  The two that have my account on them are the Pixel XL and the Asus Z10.  I purchased "Jade Empire: Special Edition" on my Pixel XL this past Sunday (11 December 2016) and began to download it.  I then jumped on the Z10 and started the download on that also.  The download on the Z10 was successful and the game runs fine on it.  The game failed to download on the Pixel XL, giving me an error code of 495.  I have spent the last 3 days on the phone with Google support and they can't figure it out, telling me to contact the publisher and Verizon.  Every other game and app has worked on the Pixel XL that I have downloaded and purchased (to include "Star Wars Knights of the Old Republic", which is from the same publisher).  I sent an e-mail to the publisher and look forward to their response in 3 days possibly more due to the Holidays (as stated in their automated e-mail reply to me).  I have tried every trouble shooting step online and from Google.  I have reset my phone.  Nothing works.  My suspicion is that it has something to do with the version of the Android operations system mixed with how large the install file is (3.6 GB).  My questions is this: If you have a Google Pixel and have purchased the game Jade Empire have you had any issues downloading this game?  Please include which edition of the Google Pixel you own. Thank you!

My e-mail to Google Support:

I was able to bypass the issue.  I say bypass, because the core of the issue remains.  I was able to download the game to my Pixel XL after sitting in a restaurant for about an hour and bumming the free WI-FI.  As I was able to download on my 2 Android devices that are in the Android OS 6 range, but not on my 2 Android devices that are in OS 7 range....I'd look there.  I think that is a firmware compatibility issue dealing with certain models of routers.  Like I said OS 6 downloaded the game fine.  But OS 7 has some issues with larger data transfers from certain types of routers.  My router brand/model is: Securifi Almond.  Please fix this issue and let both myself and the developer (Aspyer) know when it is fixed.  Thank you.

You mean side-loading via a third party software right?  Forgive me if I'm slow on this I just converted back to Android software.

No, you can remote install applications from the web site for the Play Store while you are logged into your Google account.

This would still install over Wifi and not a data transfer via USB-C cable right?  I don't see how this would be any different.

FYI the download for Jade Empire starts, but doesn't finish because of the 495 error code.

Try the different solutions offered in this article:

Then try loading the app remotely from your computer as Ann154 suggested.

Do you still get the error?

None of those options work.  I did notice that while I was on the Google Play web-page that the site said that I had it installed on both of my devices.  Which isn't the case.  I called back into Google and after some arguing they agree to have the Nexus Engineers take a look at it.  It may just require another phone update.

No real point in contacting the developer: 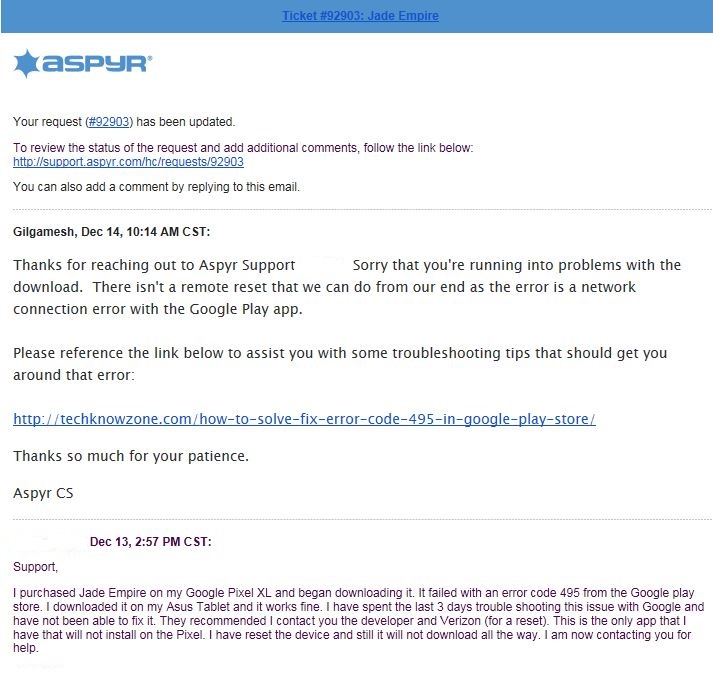