In-Store or Curbside Pickup: (excludes prepaid)
Same-day delivery:
Sign in
Help
Turn on suggestions
Auto-suggest helps you quickly narrow down your search results by suggesting possible matches as you type.
Showing results for
Search instead for
Did you mean:
More Options
Correct Answer!
Re: Thunderbolt ICS Update

People that have no clue what they are talking about always say "omg my android needs xyz software" every single phone that comes out, and anytime there is an update...

Have to agree, if you think about the claims made every time a new OS is released...   Every OS claims to dynamic increase in performance of a device but when update is release users complain about lagging, if the performance increased on a device that was already optimized this would mean the performance would exceed a number of super computers..

If hardware doesn't change and software was optimized for better performance on that hardware I do see a major difference with a simple OS upgrade.  The truth is NEWER does not make it BETTER.

i agree for the most part. my issue though, is that there are new features (google now, for example) or apps that can not be used on the outdated version of the OS. my phone works fine. it does what it was supposed to do when i bought it. i still think it's a great device, and i understand that there's no guarantees of updates. i just think that it's a shame when you buy something and one year later they give up on any support for it.

ironically, i was in best buy this weekend and wanted to see just how big the Note II was. while i was there i saw this (below)!!!!! now i honestly have no idea how their inventory works or who makes decisions and how they come about. but it's more than a year and a half old now. no more 2 versions of android behind. the end of life was about 6 months ago. many people have been getting replacements that are different makes or models (i've seen this on threads in other forums). so how on earth do they add this to their holiday line up? and even more curiously, how are they NOT just giving it away at this point? ($49.99???) 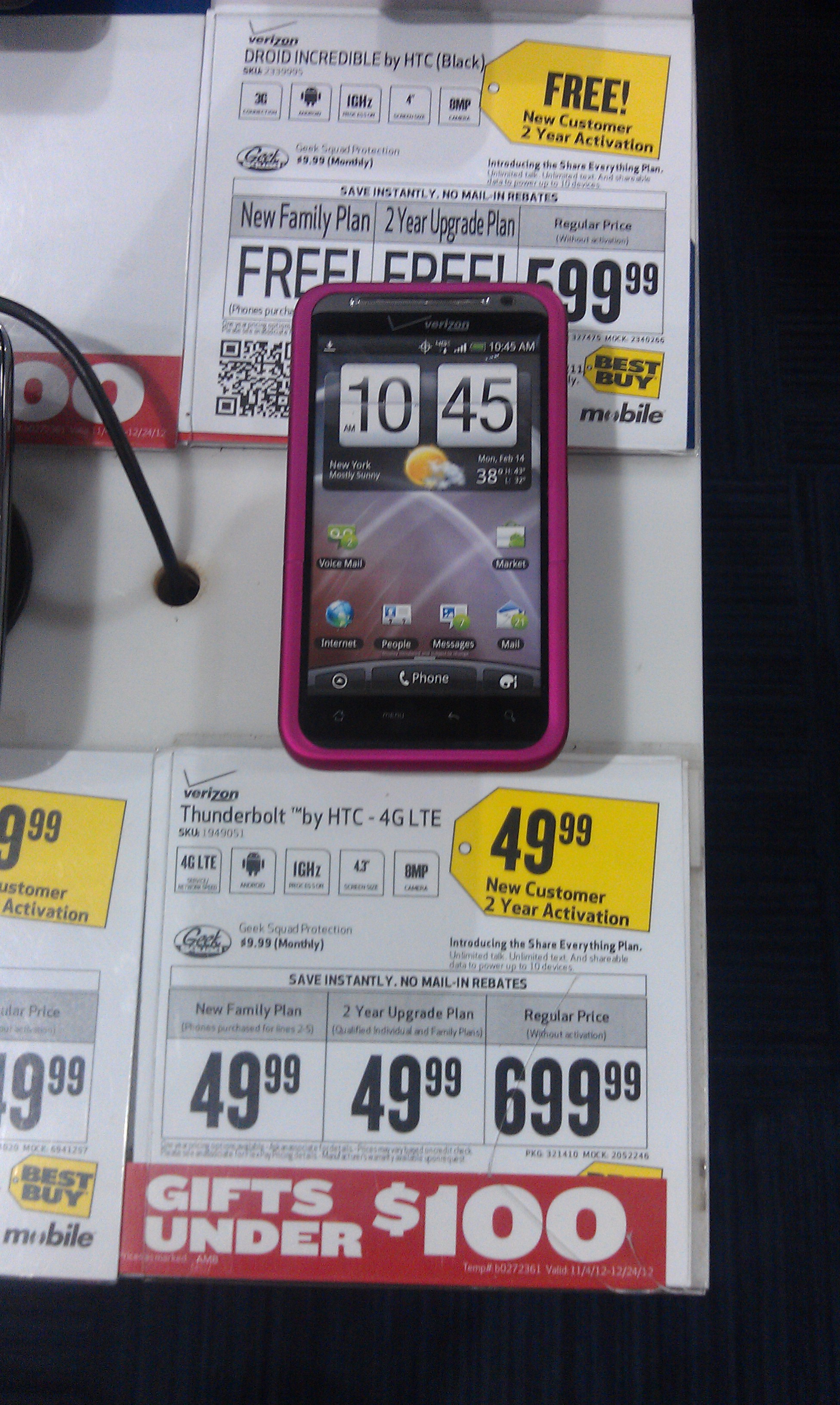 It is a bit wild for them to still sale the device after support has been removed because it reached the listed end of life time but consider this....

Bestbuy and other 3rd party company buy their stock from the carrier and if they over order or item doesn't sale they are still stuck with the devices they already purchased so they have to still try to move the devices or take the lost.

The devices are still able to be activated and used on the network still, the only difference is the owner wont see anymore officials updates for the device so users wont be screwed if they buy the device from a 3rd party..    I would show concern if Verizon still sold a unsupported device in their store, now that would be wrong.

Its one of those

but why wait so long? i have not seen it in ANY stores since spring. if they have the inventory now, then they had it 6 months ago. why not try to dump it back then, when it would have only been a year old? you can now get the razr m or inc 4G for the (both are a year+ newer and superior) same $49.99. just seems odd to me.

It is odd and who can say whats going through their minds, maybe they figured they could squeeze out a few sales to gullible customers for the holidays..

I find the advertisement more than a bit amusing, because I got my Thunderbolt at Best Buy last Black Friday (2011) for absolutely nothing.  (I thought they were just trying to clear out out their stock then.) Now more than a year later, with an OS 2 versions out of date, and they're charging $49.99. Wow, just wow.

yeah, i just don't get it and would not have believed they were actually selling it if i hadn't seen it.