Help
Sign in
Turn on suggestions
Auto-suggest helps you quickly narrow down your search results by suggesting possible matches as you type.
Showing results for
Search instead for
Did you mean:
More Options
Correct Answer!
"upgrade" to Lollipop screw everyone over?

I should have known better than to accept such an update. I should have kept telling it to go away and waited. From what I can see of this update it sucks horribly and from what everyone here and when I Google it are saying. It's terrible. It sucks. I honestly wish I could go back, but guess what? A so called factory reset doesn't reset to factory defaults. The phone will retain all updates to its core. Factory resets only erase all of your personal data. (Shouldn't be called a factory reset if it isn't going to reset the device to factory settings as a whole.)

I can barely text anymore. The fat space for my contacts info stays in Landscape view. They expect me to read what I am trying to reply to in a just a few centimeters of space. I took a screen shot for reference, though I am sure most of you reading this will know what I am referring to. 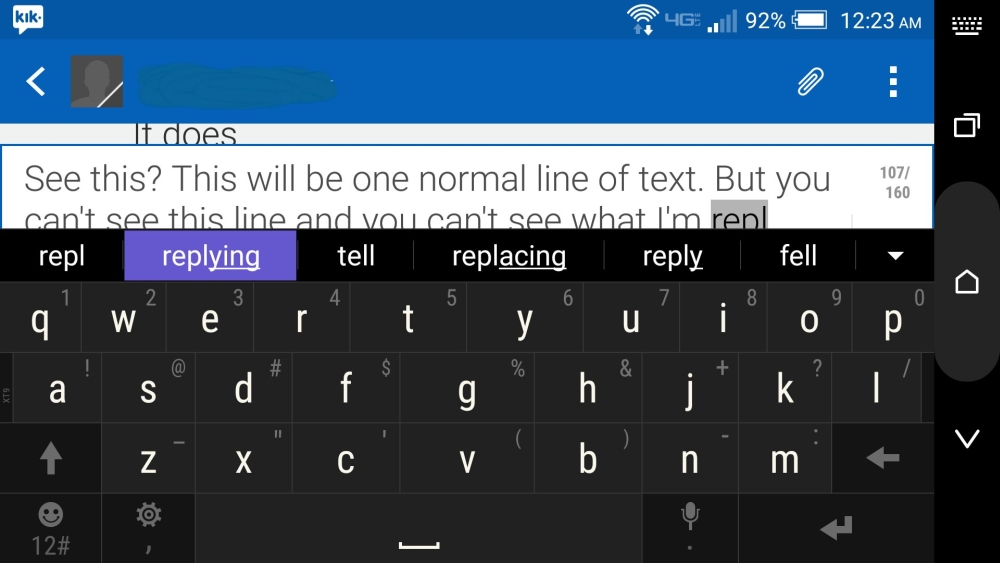 So the big blue bar is the "Contact bar' then "It does" is what my friend sent me in a text. That just isn't enough space to read anything, what the heck where they thinking when they released this update? My text was in reference to the fact that I was unable to see what I was typing bellow the word prediction box. Then it decided to bump down a bit and actually let me see, the way it's supposed to work. But it didn't even go down far enough. This is by far the most aggravating thing in this update. Why did I trust any update at all? Well HTC has been great so far and never had a bad update for me before. Just the worst. I've since removed the text all together. I still have auto-correct but that only does so much if I attempt to write a word I rarely use and for some reason have trouble spelling. Then I have to google it to make sure its right. (The word predictor doesn't always do it right and I have written at least ten real words you can find in the dictionary that I had to add to my personal dictionary in the phone previously. It's probably more than that.)

The drop down menu for notifications sucks. Who the heck thinks that this is a good function and that it would be intuitive to use? I have to swipe down for updates, swipe down again for my not so quick settings thing. Then there is the search through all this weird boxes in a scrolling fashion to find the stuff you want. Seriously wtf? I want my simple easy to see and switch between boxes, thank you very much. I don't see why Android OS has to change this much every single time. At least let us revert back if we don't like it, or change the visual look/operation back to the previous set. Phones are smart, they should be capable of this.

Suppose I have been fortunate not to have any real errors yet besides one. I somehow broke it and it error-ed out of my messaging application because I attempted to send a photo and it lagged and broke. Not like I did anything out of the normal. Also thinking that lock screen notifications was being "Added" according to the information for this update was just stupid. This phone already had that functionality and I had already turned it off. The update actually turned it on and also renamed the setting to something absolutely ridiculous that took me forever to find, it took me a minute to even locate it again just for this. Which sounds really dumb, I know, don't give me grief about it. I have no control over what notifications get blocked now, just all of them or all of them... I can still easily bypass the lock screen by swiping my quick settings down and hitting the settings button at the top. I can then hit the home button, or the two box button and go where ever I feel like just as before. Though setting a PIN lock does prevent this bypass (as does any other real security measure.) It still seems ridiculous that the supposed lock screen doesn't actually stay locked.

I realize this post is a bit long. Having glanced through here most people just write a little tid bit about a specific issue or are really vague about the entire thing. I feel your pain, I hope you understand mine. If I get anything out of this post (and I hope I do) it's that the landscape texting will get fixed. Please, please for the love of all things... Fix this! I can barely text with it so broken!

Labels (1)
Labels
Tags (1)
I have the same question
0 Likes
6 Replies
Correct Answer!
Re: "upgrade" to Lollipop screw everyone over?

I have to agree, most of the updated features are horrible.  This update automatically puts sensitive business emails on my lock screen which means anyone who is a bit on the devious side can pick up my phone and read these emails.  Besides that they added extra steps to do simple tasks.  The whole concept of efficiency has been thrown out the window.  Computers and phones are a thousand times faster than they were in the 90's but it takes longer to do anything because the GUI's are so inefficient.  Lollipop is another example of thoughtless brain dead programming.

0 Likes
Correct Answer!
Re: "upgrade" to Lollipop screw everyone over?

This for Lollipop on an S5. Might be same or similar on other phones:

All that does is make it so it says "sensitive content not displayed" or some other equally asinine thing.  I want to read my texts on the lock screen but not my e-mails.  Why is this so hard??  I am thinking of finding a lawyer to sue Verizon and Samsung over the hours of lost productivity and lack of use of my phone and I bet we could get enough people for a whopping class action suit...

Well first of all you cannot do a class action per the FCC. Second of all, get over yourself. If you don't like it, buy an iPhone.

pherson - where do you get your information? There have been multiple class action law suits against Verizon and many are still currently pending.  If it's too hard for you you to find the information on the internet, just to go the address bar of your internet explorer (I assume you use IE, right?) and type www.google.com.  Then in the little box that comes up underneath, type Verizon class action lawsuit and see how many results you get!  Or if you prefer to use BING, you can type it in the window with the little butterfly next to it.

As for buying an IPhone, I shouldn't have to buy an IPhone.  I spent hundreds of dollars on the phone I have that I intended to keep for a very long time and now doesn't work worth beans.  You, sir or madam need to get over YOURself.  Just because you didn't have any problems with your phone doesn't mean you need to minimize everyone else's. You sound like either an employee or a paid shill for Verizon or Samsung.

2 Likes
Correct Answer!
Re: "upgrade" to Lollipop screw everyone over?

They got it from the Customer Agreement | Verizon Wireless.