Mobile solutions
Home solutions
Get up to $500 when you bring your phone. Plus, waived smartphone activation fee when you buy online. Limited time offer.
$500 via Verizon e-gift card (sent w/in 8 wks). Activation of 4G LTE/5G phone on One Unlimited for iPhone (all lines on account req'd on plan), 5G Do More, 5G Play More or 5G Get More plans req'd. Device must remain active for 45 days. $500 charge back if service cancelled w/in 12 mos or eligibility req's are no longer met. See vzw.com/bring-your-own-device for details. And for a limited time, we’ll waive your activation fee when you order through vzw.com or My Verizon app. You’ll see the one time charge waived as your “Due Today” amount at checkout.
end of navigation menu
Help
Sign in
Turn on suggestions
Auto-suggest helps you quickly narrow down your search results by suggesting possible matches as you type.
Showing results for
Search instead for
Did you mean:
More Options
Correct Answer!
921.6MB session limit (8800L)

I have 2 jetpack's (8800L) they worked fine for the last month, when they renewed service on 1/28 one of them works fine and the other has a 921.6MB session limit in which you either have to reboot or go into the settings and turn on/off cellular data to restore internet.

I swapped the sims between the devices and the sim that works continues to work and the one with the issue retains the issue.

If i put the sim with the issue into an unlocked nighthawk hotspot it will work normally - i can use more than 921.6MB just fine.

There's multiple people with the exact same issue on these forums, some haven't realized it's linked to the 921.6MB limit

Another difference is after the plans renewed monday the one that works now shows "unlimited plan" they used to both show 10240MB/10240MB on the display. 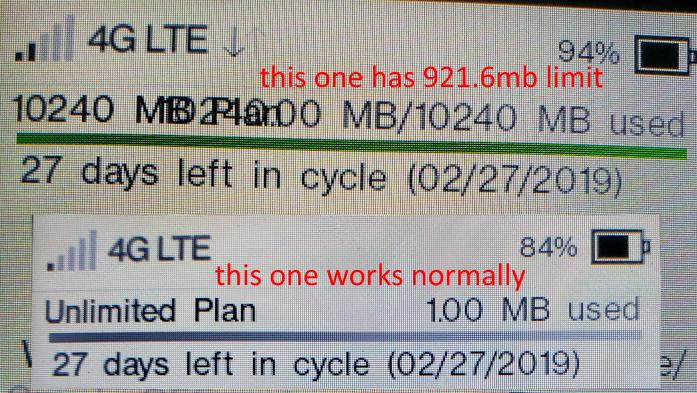 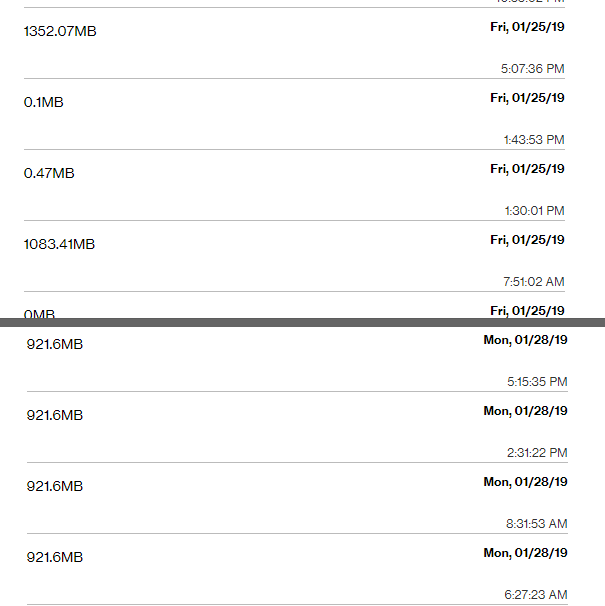 Interesting discovery, thanks for sharing your observations about the session limit.

It would be best to get VZW to chime in on something like this.  The best way to grab their attention is to call a VZW phone or chat rep directly.  Share your observations with the rep and report back to us with what you can find.  Perhaps there is a new limit we all need to be aware of.

I know that VZW does optimize unlimited connections after a certain data usage per billing cycle but I have not seen a hard session limit before.

Are these devices attached to postpaid or prepaid accounts?

I too have the unlimited jetpack plan on a 4620l jetpack, and I have been hitting the 921.6 mb limit since Jan 5 when my plan renewed. The month before I used almost 400GB, since the hard limiting kicked in I've only used 120GB, which granted, probably has more to do with the fact we weren't home as much in January, which is primarily where we've been using the Jetpack as a home internet device. Anyways, my story with customer support started a couple of days ago, when I started chatting with a tech to figure out why my jetpack seemed to lose its internet connection about every 45 minutes to 1.5 hours. I went through about 4 techs trying different things to tweak it and at one point they had my connection down to 2mb/sec via speedtest.net from messing with it in contrast with the roughly 20 mb/sec I had been getting previously. Eventually, they fixed that and I was basically back where I started. After finding your post today I looked at my usage chart and confirmed, same issue. So I just got done chatting with an agent and basically was informed that prepaid handles de-prioritization differently than postpaid which apparently included this session limit, which, as I informed the agent, I was told nothing about by several agents when I explicitly asked about the limits of the service before signing up a couple of months ago.

You can read the transcript below if you are curious:

As you can see I was a little fed up at this point and didn't feel like talking to the postpaid agent about what I already know is going to cost twice as much as the service I have now. But this pretty much confirms that at least for prepaid, there is definitely some limiting going on here. Actually at this point I am kinda curious as to how they handle the de-prioritization with the postpaid, as the only difference I can see on the postpaid plans by looking at them is the mid and high grade unlimited plans simply guarantee a little bit of non-deprioritized data before they start limiting you in some way.

Due to the age of this thread, it will be locked in order to keep discussions current.

If you have the same or a similar question/issue we invite you to start a new thread on the topic.

We would love to look into this more in depth for you, Ron (DOOSIELOU). Unused usage (in a shared plan) is not displayed on a device, however, it can be accessed through My Verizon. Are you able to sign in to your account?