Mobile solutions
Home solutions
Get up to $500 when you bring your phone. Plus, waived smartphone activation fee when you buy online. Limited time offer.
$500 via Verizon e-gift card (sent w/in 8 wks). Activation of 4G LTE/5G phone on One Unlimited for iPhone (all lines on account req'd on plan), 5G Do More, 5G Play More or 5G Get More plans req'd. Device must remain active for 45 days. $500 charge back if service cancelled w/in 12 mos or eligibility req's are no longer met. See vzw.com/bring-your-own-device for details. And for a limited time, we’ll waive your activation fee when you order through vzw.com or My Verizon app. You’ll see the one time charge waived as your “Due Today” amount at checkout.
end of navigation menu
Help
Sign in
Turn on suggestions
Auto-suggest helps you quickly narrow down your search results by suggesting possible matches as you type.
Showing results for
Search instead for
Did you mean:
More Options
Correct Answer!
Mobile hotspot performance around 30kB/s, rather than 600kB/as advertised (Jetpack Mifi 8800ML)

I'm posting here in hopes that someone might be able to give me guidance about my situation. It appears that my access is being severely restricted, against advertised terms. Here are the details.

I own a Verizon Jetpack Mifi 8800L mobile hotspot device (purchased from Verizon about two and a half months ago), which has an "Unlimited" data plan (as I understand it) that allows for 15GB of high-speed data, followed by throttled 600kB/s data after the monthly 15GB is exhausted.

We all know that 600kB/s is slow, and I went into this contract with the understanding that it would be a bit painful to use. However, each month (I'm currently on my third month of service), once the 15GB has been used, the speed of the Jetpack caps out around 30kB/s, which is 1/20 of the advertised 600kB/s speed.

If you used the internet in the late-90s, and know what it was like to use a dial-up modem, you'll know how bad it is to have 30kB/s data. 600kB/s is painful. 30kB/s is generally useless for anything other than sending messages (without media attached).

When this first happened, I called Verizon customer care and they told me that people who live in remote areas, far from centers of service, will sometimes receive slower speeds than advertised. Granted, before the 15GB cap was reached, I was able to get 4-5mb/s speeds on the device, and I continue to get similar speeds on my iPhone (also with Verizon), but I accepted that I must live a bit too far out of the city and so they are throttling the speeds based on network robustness. I live just outside of Houston, TX.

But then last weekend we spent a lot of time downtown in Houston (which I should note is currently ranked as the 4th most populated city in the USA) and I brought the Jetpack device with me. I tested it at many locations, and consistently got exactly the same results as at home.

Now, if the fourth most populated city in the USA is too remote for Verizon to provide advertised speeds, one would wonder if they intend to provide anyone with the full, advertised 600kB/s.

Is it possible that they are throttling my Jetpack based on my billing zip code, and therefore I'll never get faster than 30kB/s?

I'll also take this moment to point out that though I have an "Unlimited" plan, I'm fighting for 600kB/s speeds, which are considered to be unusably slow by many people.

But don't worry. The Verizon rep on the phone told me that I can purchase an additional 1GB of "fast" data for a price that I believe was $15/GB.

Has anyone experienced anything like this? Do I have any recourse? 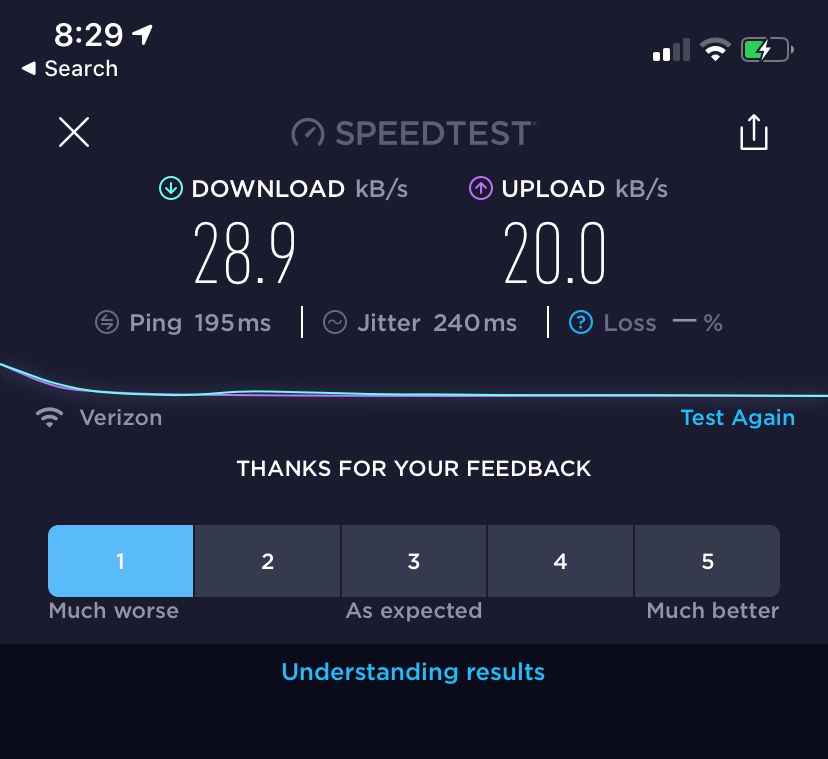 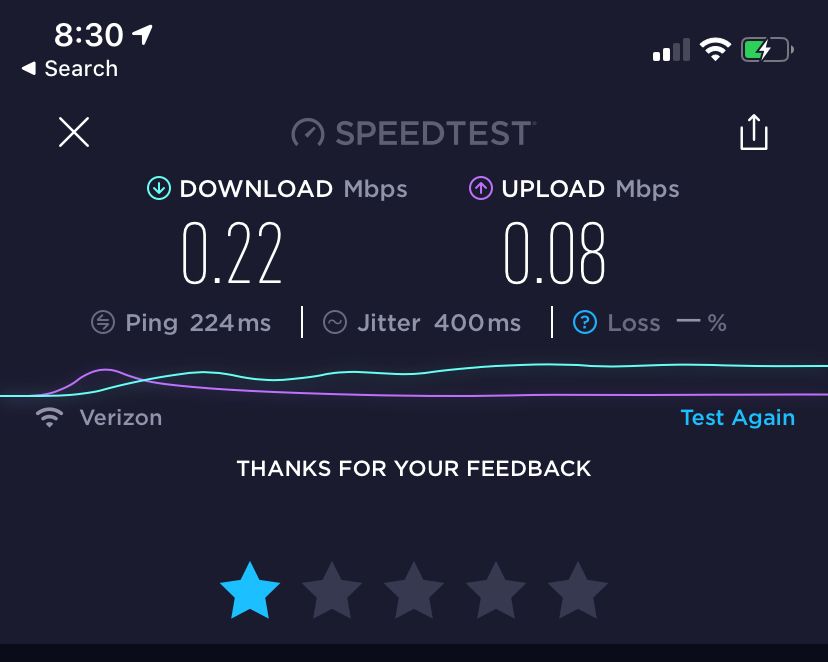 I have the same question
0 Likes
Reply
1 Reply
Correct Answer!
Re: Mobile hotspot performance around 30kB/s, rather than 600kB/as advertised (Jetpack Mifi 8800ML)

Making sure that you're on a plan that aligns with your needs is so important, garrettgibbons. We always want to make sure that we provide you the most accurate information, and we'd love to shed some light on your concerns.

How do you typically use MHS on your device? Do you experience any issues with your MHS data speeds before reaching the 15 GB LTE threshold?