end of navigation menu
Ask a question
Sign in
Sign in
Turn on suggestions
Auto-suggest helps you quickly narrow down your search results by suggesting possible matches as you type.
Showing results for
Search instead for
Did you mean:
Show all
1,325 Members online 254K Discussions 42.2K Solutions
More Options
Correct answers are available for this post.
Abysmal battery life keeps getting worse.

Battery life has been poor since day 1 (May 2014), but it has only gotten worse since then.  The 'upgrade' to KitKat was hugely detrimental to the battery life.  Looking for suggestions on this forum a month or so after the upgrade, I tried a few things that had been suggested by Verizon and other members.  I reluctantly did a hard reset.  This helped the phone run a bit smoother, but no improvement on the battery life.  I've also been running the SnapDragon Battery Guru App that was recommended.  I can't say that there is much, if any, improvement.

I'm on WiFi most of the time. I don't use blue tooth or NFC and those features are off.  The Battery Guru app needs location service, so that is on.  I've tested with it off as well and it seems to perform about the same (whatever benefit the app has is negated by having the location set to "on" probably).

Below are screenshots of my battery performance from today.  I woke around 6:30.  I was charging again at 11:15 because I was under 15%.  Is this phone just defective?

To be fair, this seems to be pretty commonly complained about amongst G2 users online, so it doesn't seem that my experience is isolated. 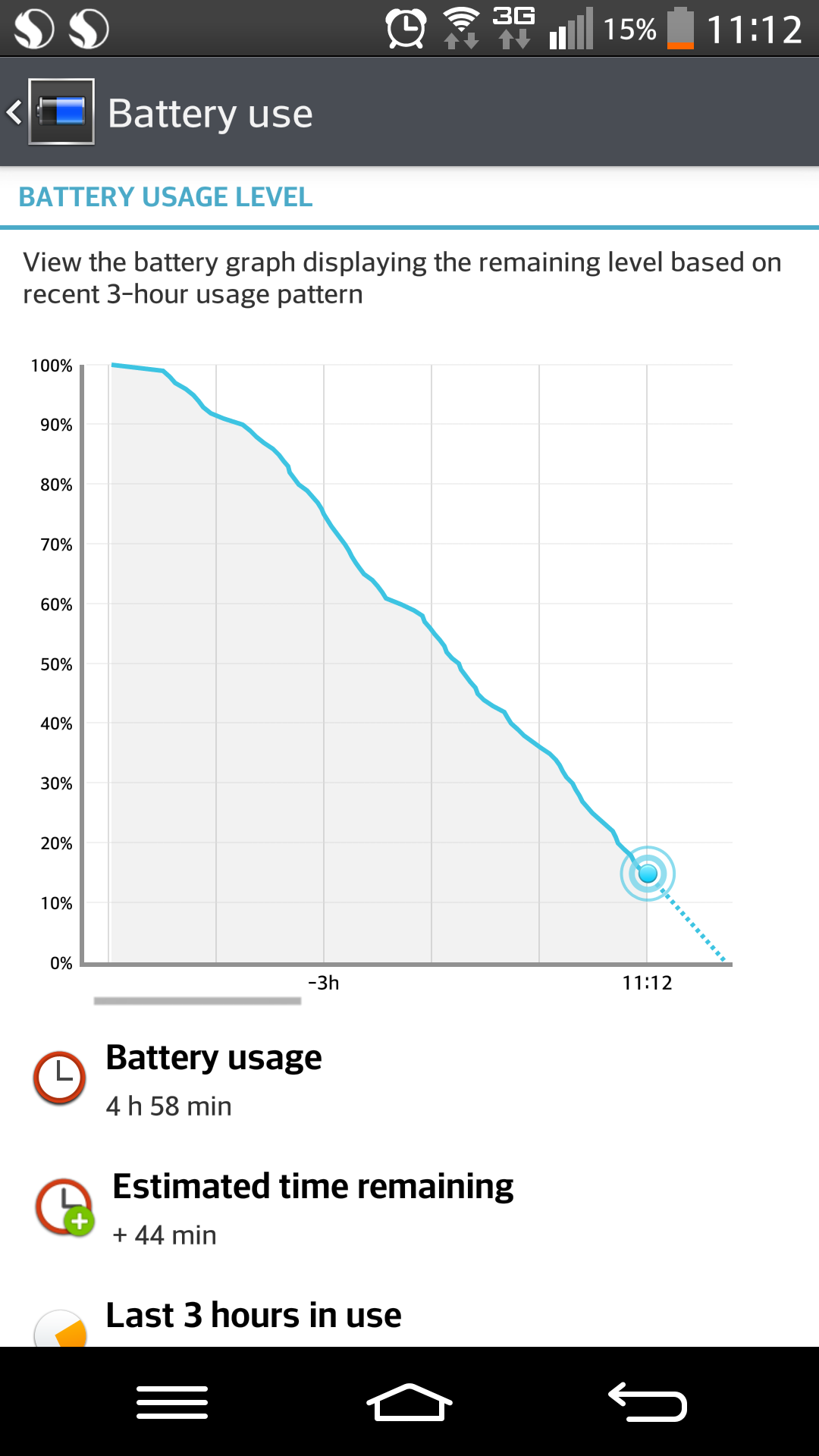 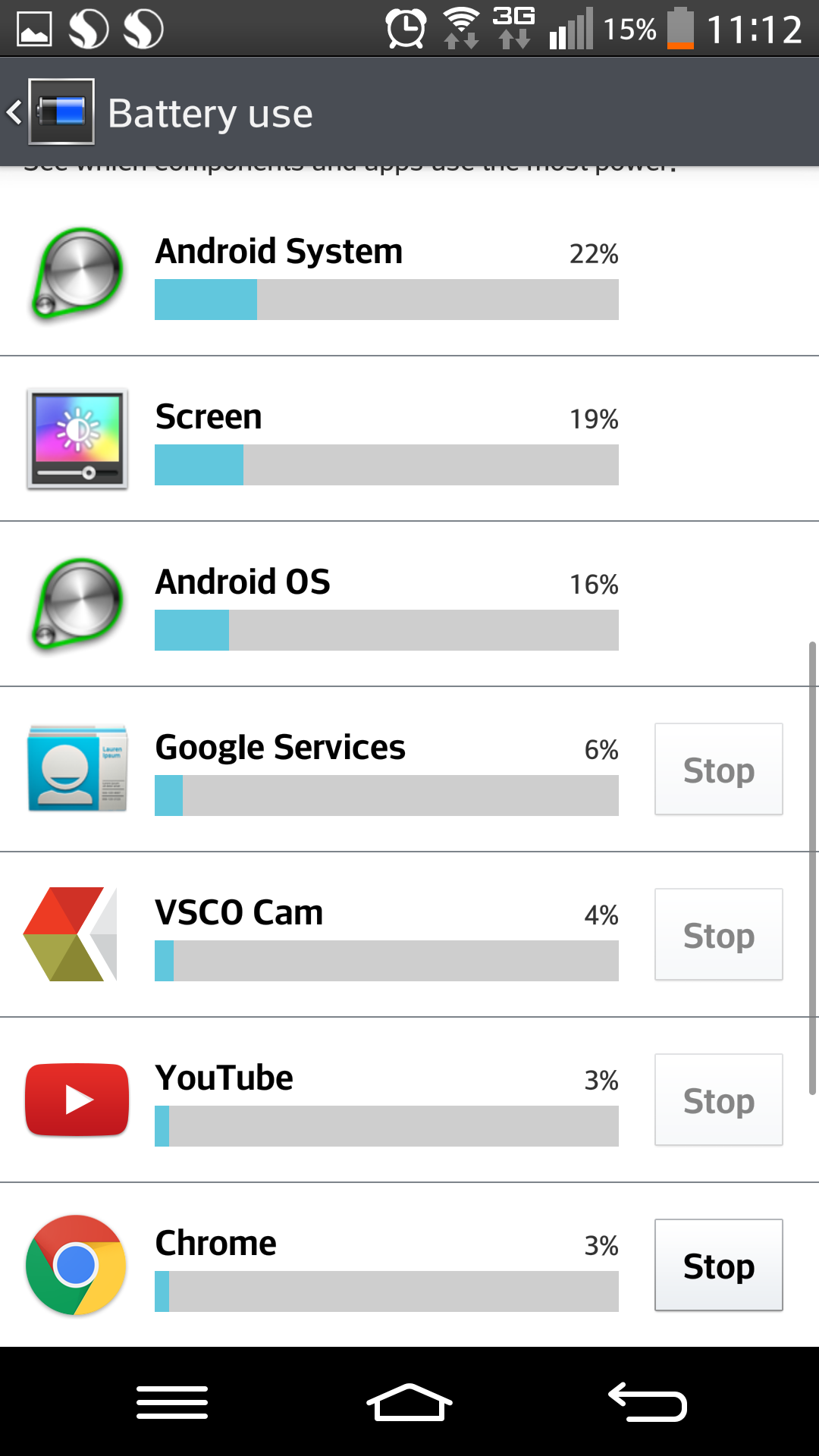 Tags (4)
I have the same question
0 Likes
12 Replies
Correct answers are available for this post.
Re: Abysmal battery life keeps getting worse.

Your battery stats should never have the OS or system ahead of screen. Screen, OS then System in that order.   I have been getting 18-22 hours between charges since day one. If you have done an FDR, then you need a replacement  phone. Sounds like a kernel issue.  Gsam battery app is the only app I know which works entirely. I have never heard of this Guru app, nor should any app that monitors better use need location.

Thanks for the reply.  I may look into the GSAM app, but at this point I have little faith in a software fix.  The SnapDragon Battery Guru app (from the people who make the phone's processor) seems like it is supposed to work like Motorola's "Smart Actions".  It takes 2 days to learn initial patterns and uses that data to turn off wifi (and maybe other features??).  Anyway, maybe it is time to start talking to Verizon.

I should clarify.  Gsam will let you know whats going on in more detail as far as battery usage.  It does not optimize anything.  I can tell you that with no app conflicts and kernel/system issues that you should get a min of 15 hours with heavy use and up to 24 with minimal use.  There isn't a software fix, not an update anyway that would help your problem.  Sounds like a rogue app to me, and it's possible that even a well-known app in quality could cause a glitch.  I wonder what strength signal you're getting as far as 1x and 4G are concerned.  If you take a look at Settings>Tethering and networks>Mobile Networks>Signal Type and Strength...how many bars of each do you have?  Most likely you'll always have less 4G than 1x.  If you are where you spend the majority of your day when you check it and find 1x very low, or find that your phone switches to 3G and back and forth to 4G or even less, I'd take a look in you Settings>Battery> tap on the battery Icon and scroll down to Cell Standby.  Tap on that and look for Time without Signal.  If you have any time without signal you can bet that's eating your battery because you have lost signal and the phone is searching for it pretty hard.  If by chance you do another Factory Reset, make sure to uncheck the options to Back up app data and Automatic restore.  It's possible that last time you had those enabled and whatever app is this problem was reloaded with its previous settings.  If none of this helps, I'd definitely call VZW or stop by a store and ask for a replacement to be shipped to you.  It would take 2 business days via FedEx.  Stores won't have refurbished units to exchange with.  Hope some of this helps.

I would have tried to get a replacement already, but my last experience doing this was so much of a hassle that I am reluctant to go down that road.  I had a Droid RAZR MAXX replaced 3x as they kept sending me phones with problems.  The one I ended up keeping had a broken headphone jack...but I was just sick of dealing with them so I just used it.

Thanks for the help!  I am downloading GSam now to see if it sheds any more light on things.

Yeah, I usually don't have much of a hassle with replacements.  Mine have all been due to software and not hardware.  I had a xt912 razr maxx just before this G2 and replaced it one time for a bad JB OTA update.  I have had 3 G2s, 3 SIMS and 1 network extender.  Turns out there was nothing wrong with any of them regarding my signal and dropped call issues.  Next time I'm fighting for a new model phone altogether.  It'd be nice to find a phone good enough to stick with for 3-4 years, giving plan prices a chance to get competitive, but phones generally are awesome out of the box and as time and updates come and go, develop issues that are only cured by another phone.  Best of luck and let me know if you find an answer inside Gsam.

No surprising news from GSam.  Screen accounts for 23% of my battery usage, wifi is eating 24%, and Apps 51%.  Under Apps, Android System is at the top with 21.4% and Kernel right behind it with 9.4%, followed by a lot of much smaller numbers.

My next move is to contact Verizon and hope that they make this less painful than it has been in the past.

Well, your rank of app suckers is correct.  The only other thing I know to do is to run it down, turn it off, charge all night, and turn back on.  I do this daily.  I may not get to 0% battery, but I turn off at night and this works for me.  BUT, I know not many can afford to turn off the phone nightly.  So, what I used to do was run to 0%/off and charge all night 2 times a month.  Yes, get a hold of VZW, tell them what you've tried, and if under warranty, ask for a replacement.  AGAIN, when you get the replacement, allow it to set itself as a backup, but dont restore app data, or apps at all.   Do them one by one when setting up the phone and choose only what you need or just have to have.

Hold up.  I just noticed that 3G icon in your screenshot.  IDK of a lot of 3G areas anymore, unless youre in a basement, center of a thick building or in a fringe wooded area nowdays.  Its quite possible you are seeing a struggle in the radio to receive signal.  Our phones gravitate toward 4G, even if it is very low, it will take 4G over 3G even if 3G is stronger.  You say this has been an issue with the battery since day one?  Did you have this issue on your Razr Maxx in the same locations or at all?  Im curious as while I have strongish 4G, my signal for voice is low enough to cause calling issues.  I had a Razr Maxx before this G2 and had 0 issues with battery or signal.

Hmm, hard to say for sure.  I got my G2 in May 2014 and moved in July.  Both locations had decent 4G.  When I took that screen shot, I was near a brick wall at my computer in a half-basement.  Most of our place keeps 4G, but occasionally it drops to 3G.  Actually, my wife's iPhone 5S keeps 4G (and higher signal) all the time here.  Battery life was comparable at this place versus our last residence.

I've got a replacement on the way from Verizon.  They recognized that this is an ongoing problem with the G2 (which is surprising, I've never had them admit something like that so directly).  Hope I get a good replacement and I hope it works better.