Help
Sign in
Turn on suggestions
Auto-suggest helps you quickly narrow down your search results by suggesting possible matches as you type.
Showing results for
Search instead for
Did you mean:
More Options
Correct Answer!
How do you get an LG G5 to read text messages out loud?

I see in some other Verizon community forums where people are having problems getting their other phones to NOT read text messages aloud.  My problem with my new LG G5 is exactly the opposite:  I cannot get it to read the text messages out loud.

I know the settings that are supposed to make this work - they don't!

Calls - Read caller info out loud (ON or OFF should be ok.  I want this OFF, but I have tried it both ways) 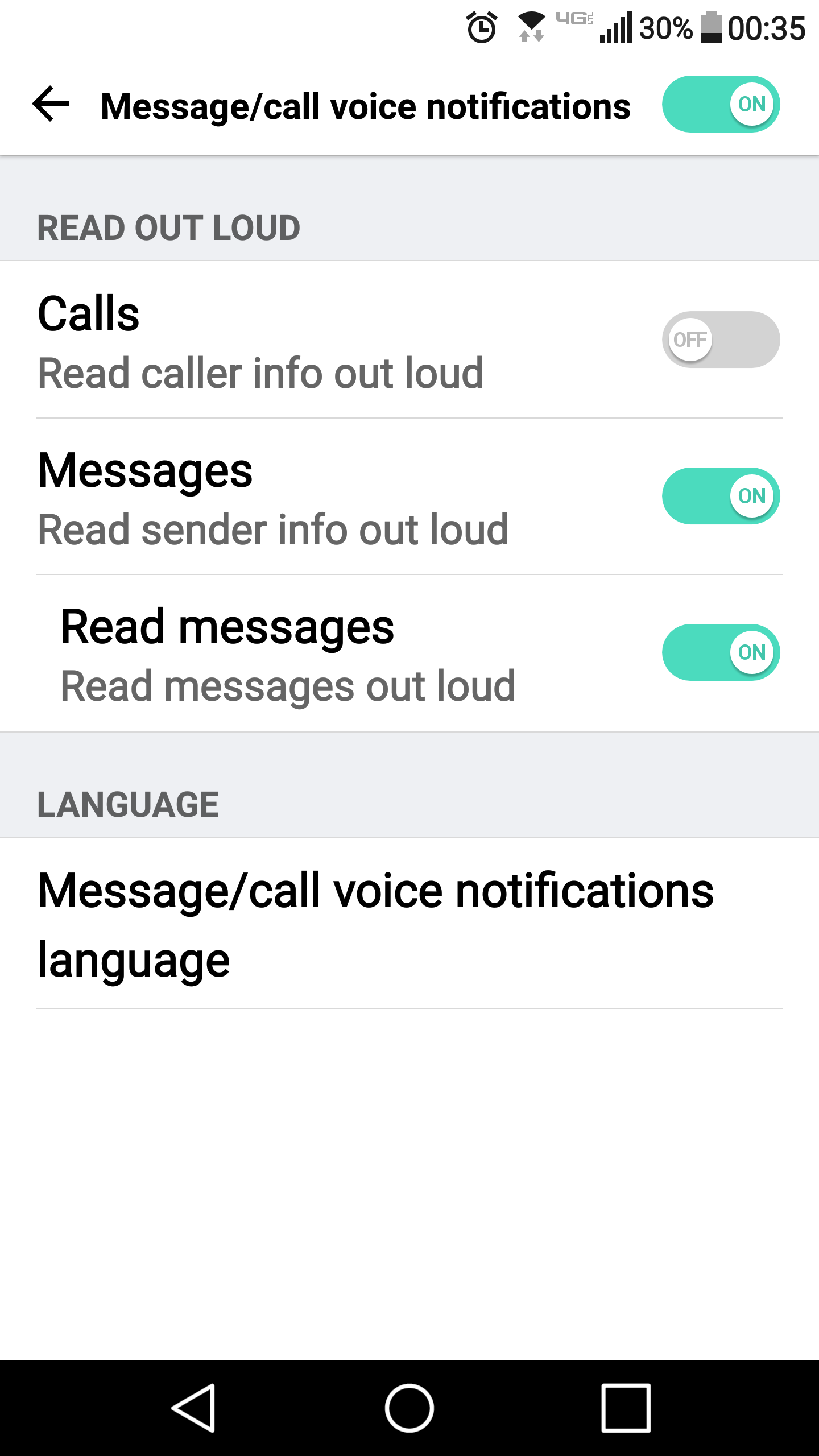 [Note: You can reach the same Message/Call voice notifications menu tree starting from Settings - Accessibility - Vision, but it really is the same menu, changing the settings from either menu changes the same settings as seen both ways.]

I spent an hour on Live Chat with LG Tech Support, with the lady walking me through exactly the same settings I already had.

Then I spent and hour-and-a-half at the Cellular Sales "Verizon" store, with two of their guys both of whom use the G5 as their own phones. Neither had ever tried to turn on reading text messages before, and together they still could not get it to work. Although both were sure that the settings were exactly what they should be.

The phone is NOT set to be silent.

The language is set to English (US) with the default female voice selected. We downloaded and tried a few of the other English voices, they all work for everything EXCEPT reading text messages aloud.

With the same settings shown above, if I turn on Calls - Read caller info out loud, it will correctly read the caller info for incoming phone calls, but it still will NOT read text messages.

We thought it might be an incompatibility with the Verizon Messages+ app, but when we tried the regular basic messaging app, it still wouldn't read the messages out loud.

I know I can install one of the many SMS Reader apps from Google Play (some work with this phone, some don't) but the apps are harder to turn on and off than just using one setting to turn the feature on and off when I want it.   And, it seems silly to download an app to do something that is already supposed to be built in to the operating system.

Has anyone gotten the LG G5 to read text messages out loud using the phone operating system?

Labels (1)
Labels
I have the same question
0 Likes
Reply
2 Replies
Correct Answer!
Re: How do you get an LG G5 to read text messages out loud?

Nope I went to Verizon store talked on phone to 3 TECH supports. Verizon ordered another. Stylo5 . That feature still did work. Finally called LG TECH who said that feature does not work on the Stylo5. My question why have a feature on a phone that does not work. I had a Stylo2 and the feature worked no problem. I am so so dissatisfied and disappointed.

0 Likes
Reply
Correct Answer!
Re: How do you get an LG G5 to read text messages out loud?

Personalizing your device is important, and I'm sorry to learn that you're Stylo 5 doesn't offer the ability to read your messages aloud. Though I can't change the features in this device, please keep in mind that these results can change if the device has another software update from the manufacturer. If your phone goes through an update, please check that feature again, as it may be enabled. I hope this information is helpful.