Mobile solutions
Home solutions
Have a phone you love? Get up to $500 when you bring your phone.
$500 via Verizon e-gift card (sent w/in 8 wks). Activation of 4G LTE/5G phone on 5G Get More plan req’d. Device must remain active for 45 days. $500 charge back if service cancelled w/in 12 mos or eligibility req’s are no longer met. See vzw.com/bring-your-own-device for details.
Help
Sign in
Turn on suggestions
Auto-suggest helps you quickly narrow down your search results by suggesting possible matches as you type.
Showing results for
Search instead for
Did you mean:
More Options
Correct Answer!
Why is verizon not honoring their free Moto Z Play Droid that they offered in December/January?

I was supposed to wait a few billing cycles for the credits to roll over and all I got was $7, not the $17 that was promised.

Link to Verizon Facebook Page about the promotion: Verizon - For a limited time, get a free MotoZ Play Droid,... | Facebook

I bought this online. I had 0/month billing. I added a new line for this promotion.

I contacted Verizon may, went through all the inconvenience to finally get it "resolved." Paper work was done, submitted and approved. A few months later, I check my line and I am only still getting the $7 credit.  I contacted Verizon on their Facebook page only to keep being told that I need to read the fine print and that it was only available for the other phones but not the moto z play droid. This is ridiculous! I'm not the only one with this issue. It was "resolved" in May but now I'm being told that it doesn't exist again.

I added a new line. There is no mistake. It says free. It says $408 device payment agreement req'd. less 408 credit applied to account over 24mos. begins 2-3 cycles. Now I've waited and being told that this promotion doesn't exist!

Labels (1)
Labels
Tags (1)
I have the same question
0 Likes
Reply
2 Replies
Correct Answer!
Re: Why is verizon not honoring their free Moto Z Play Droid that they offered in December/January?

Did you trade-in a phone as part of the purchase? Most of the deals where the new phone is essentially "free" requires a trade-in of certain eligible devices.

0 Likes
Reply
Correct Answer!
Re: Why is verizon not honoring their free Moto Z Play Droid that they offered in December/January?

Yes I'm in the same boat. Our promotion was Moto Z play droid for $5 a month with a $12 credit, that we bought in Feb 2017. It said nothing about adding a new line, and said no trade in required. We purchased the phone over the phone with a Verizon customer service rep. We have screen shots of the promotion that was being run from the Verizon page to back that up. After seriously spending 10plus hours on the phone with customer service reps, who have told us that it takes 2 billing cycles to get the credit, wait another month, yup they messed up, will credit you next month. To their current stance, of that only applied to new lines. I'm sorely disappointed in Verizon's dishonesty and feel like we were duped. We #1 would have saved ourselves $60 a month by going to At&T had this promotion not been in place. #2 if we were going to end up paying $20 a month for these phone, we would have continued buying our preferred phones  (Samsung Galaxy). We are currently looking at other avenues via small claims court or arbitration. And mark my word, we are done with Verizon, when ever we can get out of this contract. I'm so disappointed how they have handled this. I do not appreciated their dishonesty and do not want to continue business with them. 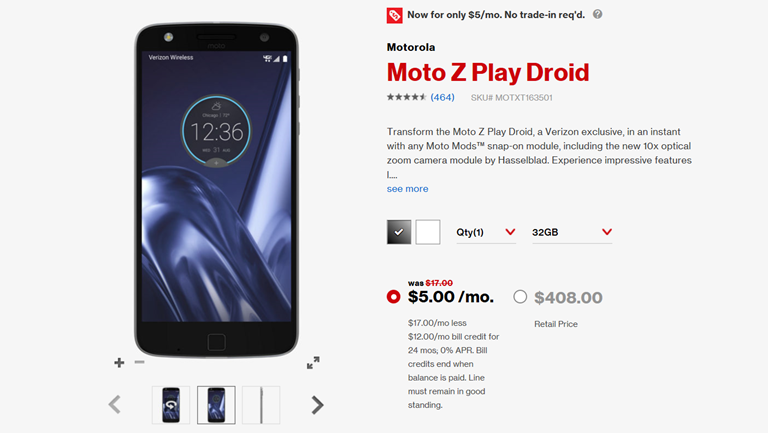