Help
Sign in
Turn on suggestions
Auto-suggest helps you quickly narrow down your search results by suggesting possible matches as you type.
Showing results for
Search instead for
Did you mean:
More Options
Correct Answer!
Billing After Adding New Line

After chatting with customer service, I was able to (mostly) resolve this issue. But I'm still a bit bothered by the situation, so I thought I'd post this here and see if people can help me understand what exactly is going on with this new bill.

I recently got married, and we decided to add my wife's phone to my plan and move to a family plan to save a few bucks.  The process to add her line was pretty easy, and she came onto my account on 17 February.  My billing cycle runs from the 11th to the next month's 10th, so I added her about 6 days into the 11 February to 10 March billing cycle.

That reflects the smartphone line access and the wireless phone protection plan she used to pay for, pro-rated for the period of 17 February (when she was added to my account) to 10 March (the end of the billing cycle).

That all looks good to me.  But then I looked further down and noticed that there is an additional line.

Keep in mind, this is all under the 11 February to 10 March billing cycle.  To me, it seemed I was clearly being double-charged:  the pro-rated amount for her plan from 17 February to 10 March, and then the "usual" amount that would be charged for the normal billing cycle.  In all, I think I was basically paying an extra $20 (line access) plus $6.85 (protection plan), for a total of $26.85.

When I called the customer service line, they insisted the bill was correct -- however, they kept trying to explain the pro-rated amount.  The pro-rated amount makes sense to me - what doesn't make sense is why I'm paying a pro-rated amount plus the amount I'd normally pay for having the second line on the account.

I tried to ask what exactly I was paying for with respect to the "Monthly Charges" for this billing cycle.  The pro-rated amount would seem to cover service for her phone number for the period she was on my plan; what were the additional $20 and $6.85 for?  The customer service representative would simply go back to explaining what the pro-rated amount was, and couldn't give me a satisfactory answer.

In the end, she was kind enough to give me a credit for the pro-rated amount, which is nice, but 1) still charges me a few bucks more than what I ought to be charged and 2) doesn't leave me satisfied with respect to an explanation of what I'm being charged for.  I'm pretty much content to leave it as is, but I was wondering if anyone out there could help me understand what is going on with this bill!

Tags (3)
1 person had this problem.
I have the same question
0 Likes
Reply
10 Replies
Correct Answer!
Re: Billing After Adding New Line

Your story does not make sense.

You say your billing cycle runs from Feb 11 thru March 10 and you added your wife on Feb 17. If this is so, then you should not see anything for your wife's line until you receive your next bill after March 10. Your current bill should have been generated prior to your wife joining your account on Feb 17 so I don't understand how her line can be on a bill you had already received. Did  you actually add her on Jan 17?

It's always a good idea to do major things on day one of a new cycle vs mid.

1 Like
Reply
Correct Answer!
Re: Billing After Adding New Line

No, I definitely added her on 17 February, as confirmed by the Verizon support person I called and the fact that we weren't married in January.

I'm confused why I'm paying twice for my wife's line.  Why am I being charged the pro-rated amount and the typical, full, amount for the same period?

1 Like
Reply
Correct Answer!
Re: Billing After Adding New Line

This is what the customer service rep said, as well.  But she couldn't quite explain the "bill in advance" piece of this.

I guess what I'm hung up on is this.

My wife's plan ended on 17 February, and she was added onto my plan on that day.  So, I have a pro-rated amount covering her smartphone from 17 February to March 10th.

If that's the case, then fine, I suppose that makes sense and I guess we'd receive a credit when our plan eventually ends for the advance billing cycle.

Here's the screenshot of the bill, if it helps! 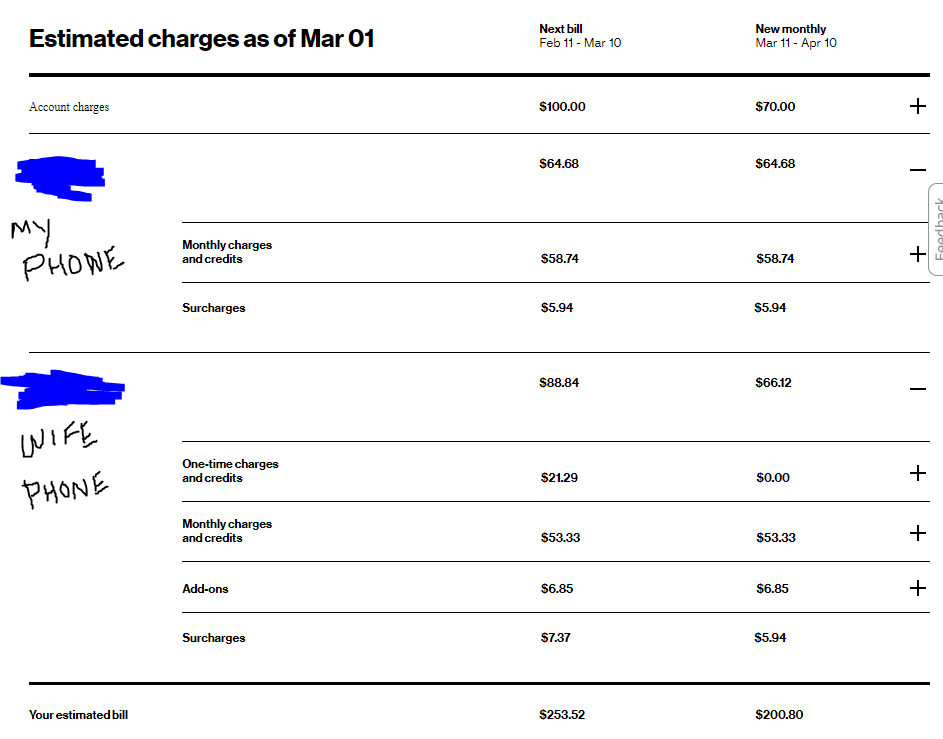 Billing concerns are not what we want for you. Our goal is to help. Overall, your billed a month-in-advance. Does the help? 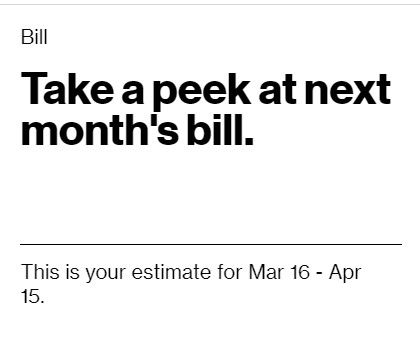 Of course, my billing dates are not the same as yours.

Regardless, while what you have shown is your estimated bill which will actually be generated after March 10, will be for your service charges from March 11 thru April 10. That is what the charges for your line will be and also the "full" line of charges which you think is an additional line but is in fact for your wife's line from March 11 thru April 10. The prorated charges are for your wife's line from Feb 17 thru March 10.

So the bill you have shown is for a full month for  your line and a full month for your wife's line from March 11 thru April 10 and a partial pro-rated month for your wife's line from Feb 17 thru March 10. Keep in mind, as your screenshot clearly states, this is an ESTIMATE. You will see the actual amounts once this bill is generated after March 10. To see your CURRENT actual bill, instead of clicking the link for an estimate of your NEXT bill, you should click the link for your CURRENT bill and for the itemized version, you should make sure to look at the PDF of the bill. 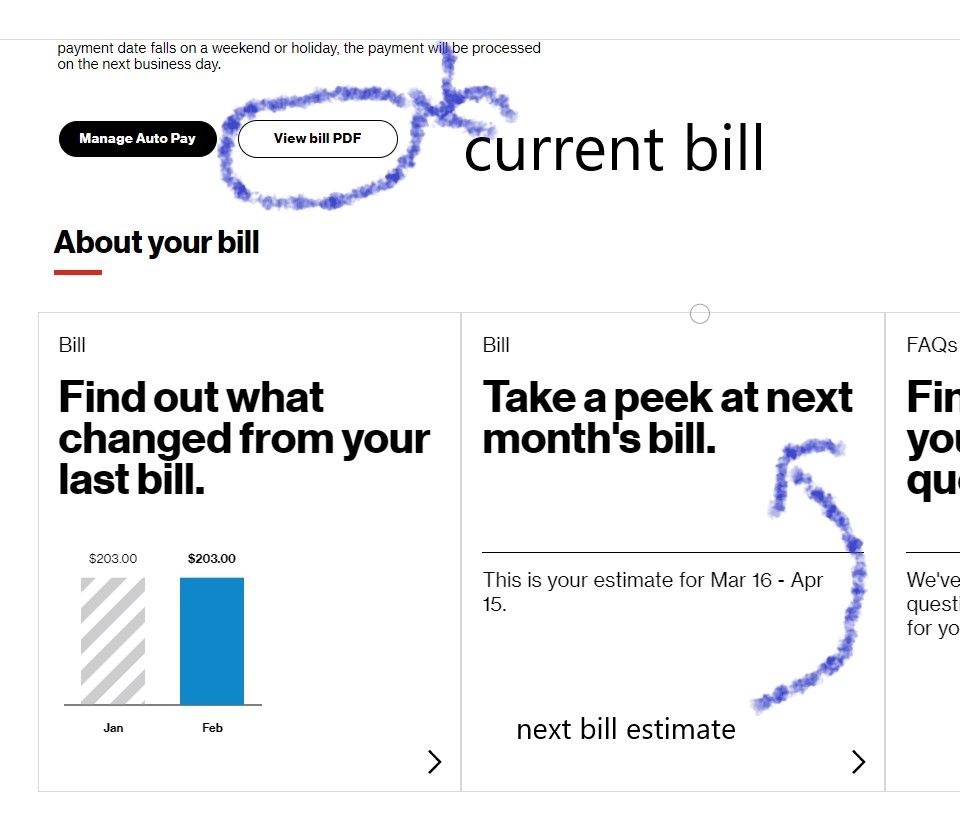 We appreciate the clarification. A Private message was sent to you for further support. Please respond from that message to continue. BobbyN_VZW

This same thing just happened to me. The three original lines I had have each been charged an extra $25-$30 as a partial payment after I added a new line. Makes no sense to me, I have talked to 3 different representatives. It’s frustrating after being a customer for so long they never mentioned that I’d pay my regular amount plus a partial payment? I feel like I’m being duped. Also, I asked the representative if I would have added the line at the beginning of the billing cycle would I still be charged and she said yes. Help