In-Store or Curbside Pickup: (excludes prepaid)
Same-day delivery:
Sign in
Help
Turn on suggestions
Auto-suggest helps you quickly narrow down your search results by suggesting possible matches as you type.
Showing results for
Search instead for
Did you mean:
More Options
Correct Answer!
Customer service or lack there of

I just wasted almost an hour and a half of my day trying to figure out why I have an $823.95 collections notice in front of me with Verizon's name attached to it.

I had Verizon last year, TV and internet, and after a move I ended up with two internet routers. When I canceled my TV package I was sent a bill for $1100+ for equipment that was not returned. After a lengthy phone call we figured out that Verizon did not send a box to my house for me to send off the equipment. I understand things happen and as long as the charges came off my account and it got taken care of I was fine. When the box came a slip of paper containing the serial numbers to all the equipment to be returned was with it. I double checked all the serial numbers were correct and when I found I had an extra router I called and asked if they wanted me to throw that into the box, they told me no because apparently i had purchased a router and rented a router. A few months later I canceled my account completely.

Now, today I called to dispute the current collections charge I have. The automated prompt could not find my account with the phone number that was attached to the account and when I finally got a real person they couldn't either. So I was put on hold and sent to recovery because, "they had acess to the account." After speaking with someone in recovery they decided that they did not have access to my account either so I then was put on hold once again and sent to billing. When billing answered I went through the story for the 3rd time in 30 min, she was only able to locate a $99.99 charge for the router I still have because again I was never sent a returnbox. I was then put on hold again and sent to financial services and told the story for the 4th time, after searching for my account it turns out I was sent to the business and not residential side. So yet again I was put on hold and sent to another department. Now I explain the situation one final time and again the person is unable to find my account. She tells me that she is going to stay with me while she attempts to locate my account through the collection agency with my social. After 20 min I ask her if she is still on the line or has any idea how long this will take... I get no answer. I had been sitting on hold with no one waiting on nothing. 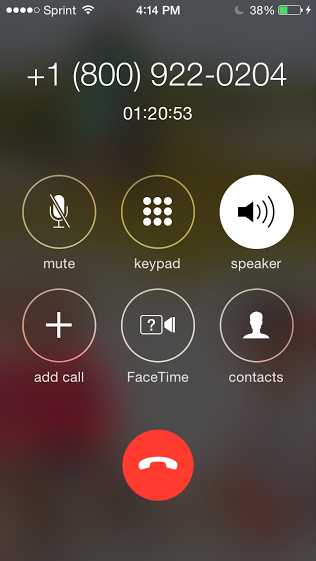 I am beyond fed up with verizon and now i have $823.95 worth of reasons in the form of a letter destroying my credit and all that can be accounted for is $99.99. Which would have been taken care of had verizon not forgotten, AGAIN, to send me a box to return the item to them.

Labels (1)
Labels
I have the same question
0 Likes
Reply
1 Reply
Correct Answer!
Re: Customer service or lack there of

Sounds like a disaster...best of luck to you in getting your issue resolved.