Help
Sign in
Turn on suggestions
Auto-suggest helps you quickly narrow down your search results by suggesting possible matches as you type.
Showing results for
Search instead for
Did you mean:
More Options
Correct Answer!
Data usage seems fraudulent!

I had a "small" data plan because we simply don't do much with it. Now, it's as if we are draining through it within the first 2 weeks.  I also used the VerizonUp "benefit" to bump it up 1Gb and it's down to .57G within an hour.  Without any use of the phone!! This seems fraudulent, like Verizon is lying about data usage to get people to bump up their plan.  How can I be showing 25% of data used for "Gaming" when I have no gaming apps?

Having an understanding of where your data allowance is going is everything. Your concerns about your usage are warranted, so we're here to help provide some additional information to help. We know that adding bonus data only to have it be half depleted within an hour is a shock. Data usage updates are not immediate as it has to be reported and verified by the network before displaying on your account. For example, you can use cellular data at 6am but that usage may not show up on your account until several hours later. You are doing the right thing by checking out the Data Utilization tool to help get an understanding of what's using your data. Since we're unable to see exactly what you're using, please note that the tool is meant for general information that can help provide a bit of clarification surrounding where your data is going. The categories the Data Utilization Tool provides do not only look at the types of apps you use, it also maps any usage from your browser, connected devices(if you use mobile hotspot), etc.

The best option in managing and monitoring your data usage may actually be on your devices themselves. Connect to WiFi when you have it available and turn cellular data off when you've established a WiFi connection. This will help ensure you're not using data from your plan unexpectedly. Also, depending on your device, you may be able to get a better idea of what services/apps are using your data. What devices do you have? We'd like to provide you with the steps needed to view your usage from your device settings.

ShawnteJ_VZW
Follow us on Twitter @VZWSupport
If my response answered your question please click the �Correct Answer� button under my response. This ensures others can benefit from our conversation. Thanks in advance for your help with this!!

So the helpful info is that I have to constantly switch mobile data on and off constantly?  Isn't it advertised that Wi-fi will be used as the priority when both are available?

And speaking of using data at 6am, Verizon's data log is showing more usage at 5:44am (when I'm asleep, whether ET or MT), than 10:00am when I'm awake!  Is the data log inaccurate? How would I be able to track data usage if the logs are wrong?  Verizon might want to list the time zone for this, too.

I'm in the broadcast industry, so I know that my Wi-fi is fine in my home and at work.

Sorry to sound short, but this sudden data drain was as if a switch was thrown a month or so ago, and nothing on our part has changed.

That's just when the data was reported not when it was used.

Well Verizon's definitely not lying about your data usage.  It's more likely that an app on one  of your devices is causing the data.  It might be possible for you to look in settings and figure out what's using all the data.

Your phones can independently track data usage if properly configured. 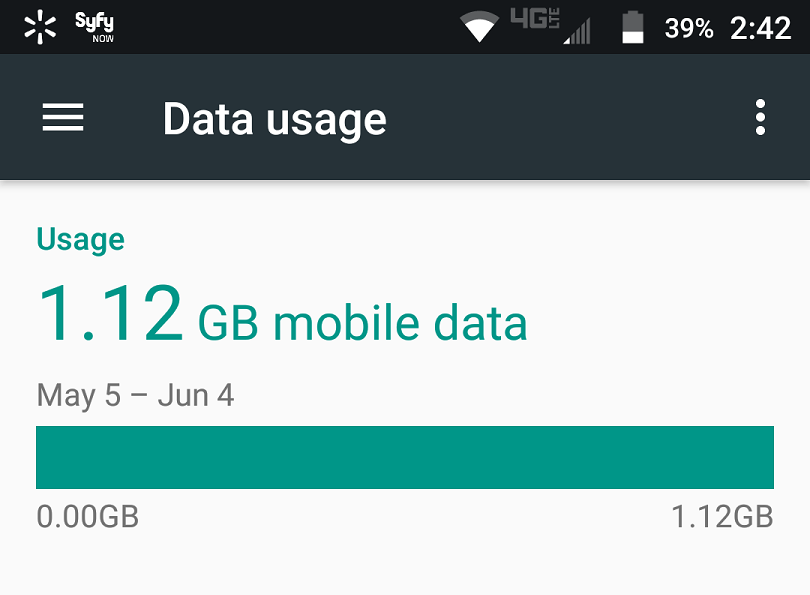 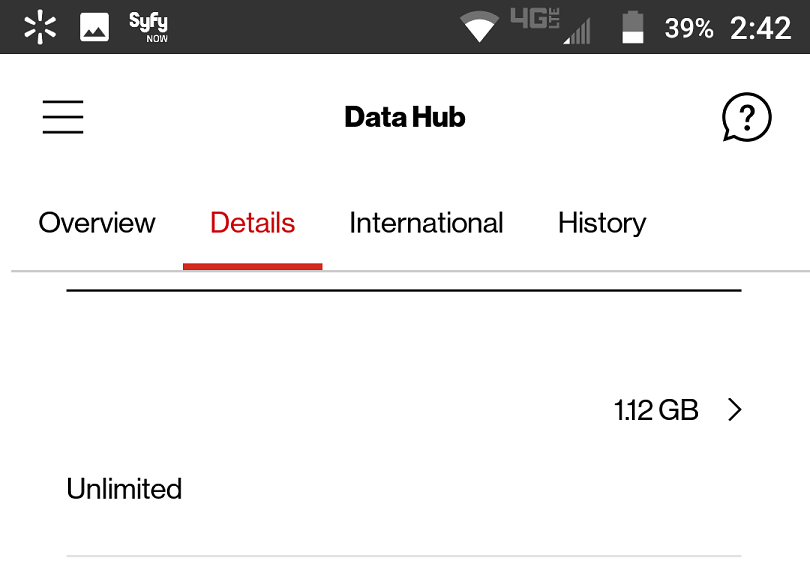 The current data usage measured by my phone and the usage recorded by Verizon for my line is exactly the same.

Back in 2014 I saw numerous posts claiming Verizon was ripping them off with false data charges.  So I took all the phones on my account and set them up so I could track their data usage.  In the past 4 years I have never found a discrepancy so I don't believe Verizon is ripping anyone off.  There have been unusual spikes in data usage on lines, but it has always been the fault of an app setting not Verizon.

For example I had set the Facebook app on my Mother's phone to only auto-play/prefetch videos on Wi-Fi.  Months later I noticed her line had a significant increase in data usage.  I checked the data usage app on her phone and saw that the Facebook app was responsible for 90% of her usage.  I opened the app and found that a recent app update had reset the video auto-play setting to enabled.

One month on a family trip my Sister was cursing Verizon because of data overage notifications.  I checked her phone and it showed she had only used 2GB.  However, she did not have the data usage app set to match her plan period.  After correcting it I confirmed that Verizon's reported data use was accurate.  I then found that the Peel Smart remote app had consumed 6GB of data updating its program guide in the background.  She had only used this app once when she first received the phone to control the TV.  I disabled the app and she hasn't had any issues since.

Is your phone configured to keep Wi-Fi on when the phone goes into standby?  If not an app can decide to update/download content during this time and will use cellular data. 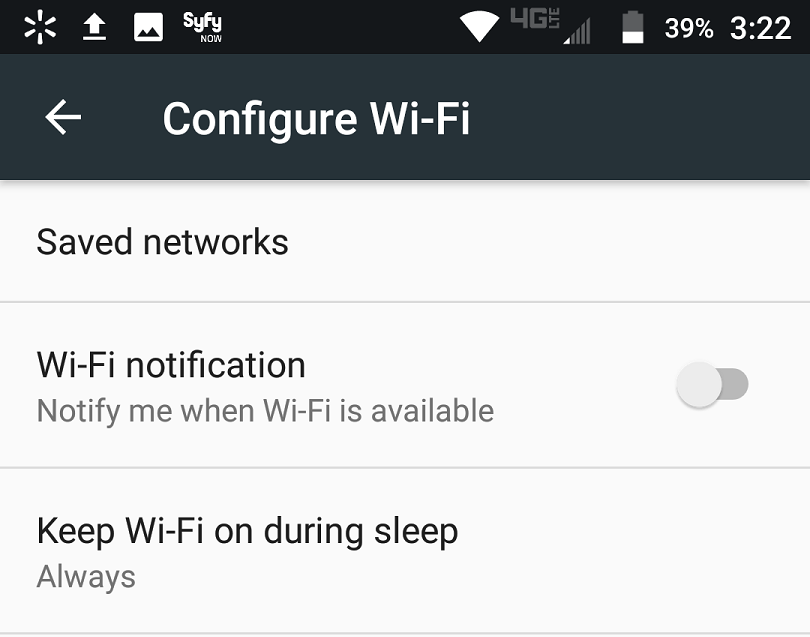 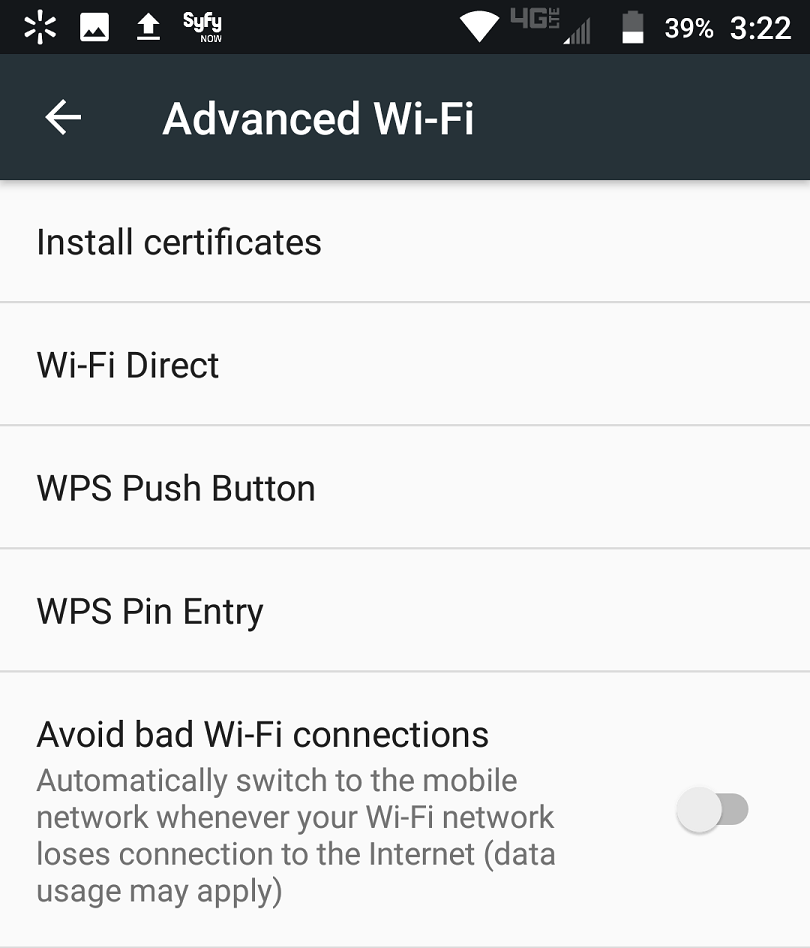 VisforVerizon, there are many factors that can impact your data usage even when you're not making any physical changes. For examples, software and/or application updates can change the way your data is being used in the background. We would be happy to take a look at account options with you through Private Message on our Facebook or Twitter platform.

VisforVerizon, it’s our goal to ensure you’re able to enjoy your data usage without too much worry. We have several tools and resources that can help monitor your data usage: https://www.verizonwireless.com/support/tools-for-monitoring-usage/ to make life easier for you.

These tools are meant to guide you. They can help notify when you’re close to using all of your data, track where data is going in general, and see the relative time that data is being used. As some of the other users have mentioned, the reports are not actually confirming the specific time that data is being used. Cellular devices are constantly connecting to data (unless manually switching the data services off) so the reports are always updating throughout the day instead of minute by minute or second by second.

The most helpful tool to monitor data usage is truly by using your own device. Your device may have a specific setting that will want to use the best connection available – whether it’s Wi-Fi or data. The device will also confirm which specific apps on your device are using data and how much has been used by that particular app. If you can confirm the make/model of your device, we’d be happy to cover these options with you as well.

If my response answered your question please click the _Correct Answer_ button under my response. This ensures others can benefit from our conversation. Thanks in advance for your help with this!

Glad I came across this post. The past couple of months we have gone over our data. Strange to me as we’ve been home a lot and on WiFi. I did an experiment last night. Checked our data at home in the evening while all of us were connected to WiFi and not using our phones. When I woke up our data had gone down. Glad to know it isn’t just me.

I've experienced the exact same thing and had the exact same thoughts. When we are all of a sudden being told we are over our limit with 8 days left was shocking, as it was totally not in line or anywhere consistent with our past usage. After paying $75 in overage fees, the very next month we went over our 12GB limit with 14 days remaining!!?? And to top it all off, our Internet Provider (Frontier) lost it's internet connection with us, and we have to wait 3 weeks before a technician can come out to get our internet back. Three weeks with no internet, having to use data at almost $15 fee a day.....   Totally unrealistic/inconsistent with our past usage history. Things that makes you go hmmmmmm.