Mobile solutions
Home solutions
Have a phone you love? Get up to $500 when you bring your phone.
$500 via promo credit when you add a new smartphone line with your own 4G/5G smartphone One Unlimited for iPhone (all lines on account req'd on plan), 5G Do More, 5G Play More or 5G Get More plans between 11/15/22 and 1/4/23. Promo credit applied over 36 months; promo credits end if eligibility requirements are no longer met. See vzw.com/bring-your-own-device for details. Excludes Verizon Prepaid plans.
end of navigation menu
Help
Sign in
Turn on suggestions
Auto-suggest helps you quickly narrow down your search results by suggesting possible matches as you type.
Showing results for
Search instead for
Did you mean:
More Options
***Announcement: We’re excited to inform you that we will be merging the Fios and Wireless Communities to a unified Verizon Community with a new look and feel throughout. If you are interested in what specifically has changed, please see the New Revamped Community article under the Featured Topics.***
Correct Answer! Jump to solution.
Fraudulent Purchases

Today I logged in my bank account and noticed a charge from Verizon. I’m not a subscriber to Verizon, as it doesn’t pick up in my area. The charge reads as:

(****I removed the last few digits for security)

This was done on my business checking account. I use this account for business purchases and to pay employees. I contacted my bank right away and reported the charge. Oddly, they seemed skeptical that my account number was stolen or used in this fashion. They said since it was pending there was no way for them to stop it.

I then contacted Verizon’s customer service. I provided the numbers listed on the transaction and the customer service rep even checked orders by my last name. She seemed very interested in helping me after the fraud department basically said there was nothing that could be done. She could find nothing and told me to contact the bank again.

Then decided to check the order status myself. To my surprise, the number on the charge worked! I had to enter the number and guess at the zip code, but it did pull up a longer order number (11802105069-----, last few digits removed for security) and more information. The order was placed 4/15/2017 and is currently processing with an expected ship date of 4/21/2017.

Alright, now this is something -- or so I thought. I called Verizon back. I gave the rep the order number, which he said was too long for an order number. He said it didn’t pull anything up in their system, but I was looking at the page and it DID show something. Then I tried it again and it worked on my end. I’ve captured a copy of the screen for my records as evidence that it does show an order. He spoke with a supervisor who contacted the fraud department. They basically pushed back and told me to just let the bank handle it.

How was this person able to use my account to purchase a phone? Did they sign up for a plan with my bank account too or just buy a phone?

Labels (1)
Labels
Tags (3)
10 people had this problem.
I have the same question
1 Like
1 Solution

This is a screen capture of the order page that I was able to pull up. 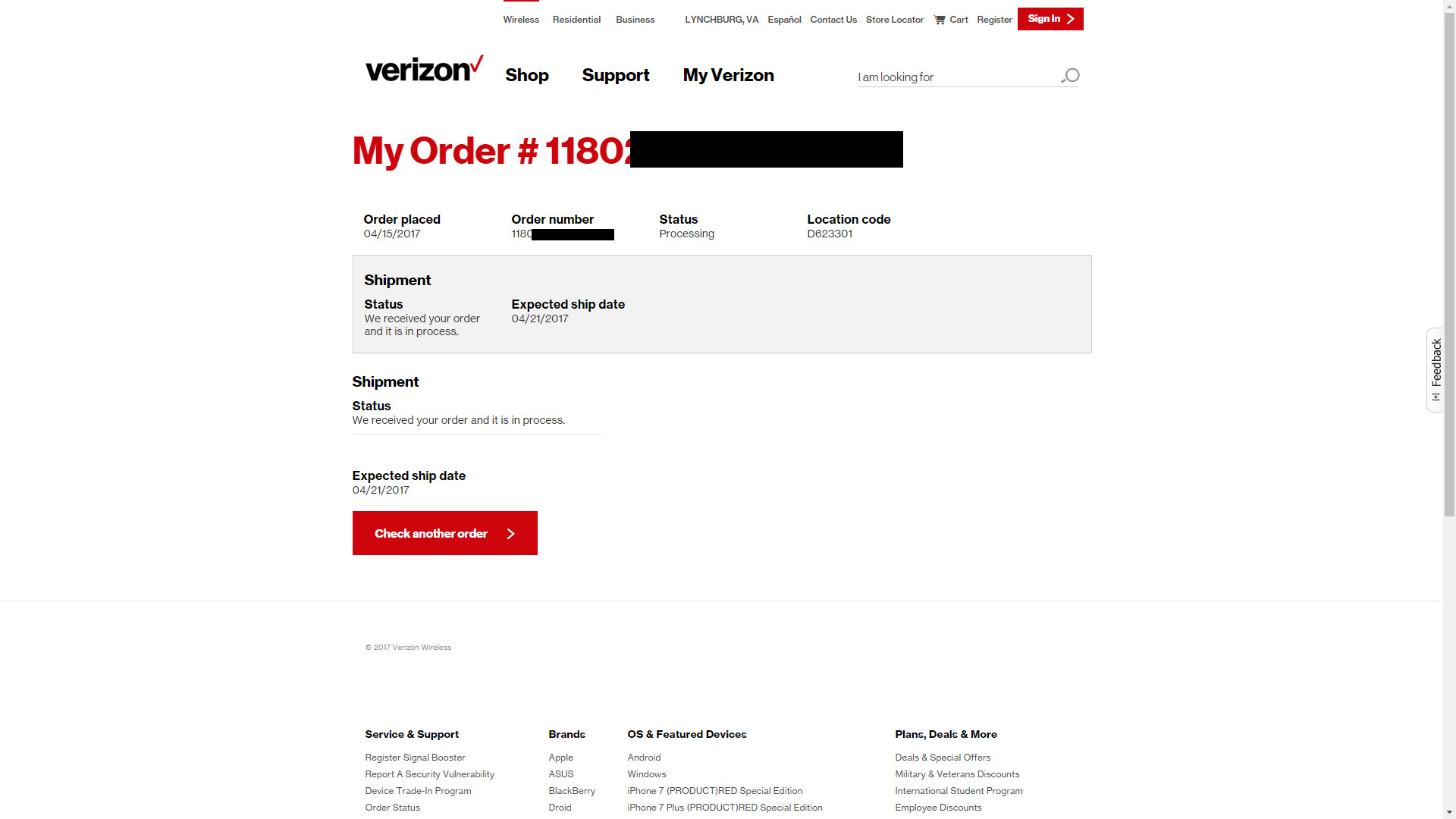 Wow number one what the heck is wrong with your bank. If I called my bank and reported something like this to them and they acted skeptical when I was trying to report a fraud on my account let me just say they would not be my bank anymore business or personal. I really wouldn't expect much from Verizon but I would call the bank again. They should have your back and they do have a department for the type of problem you reported to them. I hope for your sake and piece of mind that you can get this worked out . Keep us posted please

Your bank is the problem here to be honest.

If you say its fraud then its fraud someone stole money from you.

Was the order placed on you verizon account or just paid for with your credit card? Either way your bank should still stop the charge no matter what.

If they have a problem stopping it until after it posts then wait until then and call them back.

1 Like
Correct Answer! Jump to solution.
Re: Fraudulent Purchases

I have been trying since March 17 to contact Verizon for this same issue. I have not been able to connect via phone or chat. I have received several documents in the mail with the same type of heading, and the associated charges have gone from $332 up to over $2000 in 2 weeks.

I would be concerned receiving documents showing large charges, tcimi. We want to get to the bottom of this. Please provide more detail about the documents you are receiving. Are they addressed to you with your account number? What does the document say?

I have had this same issue on my business checking accounts and verizon has made no efforts to assist or help trace back the amounts charged even when provided with webpay confirmation number.  If anyone has any suggestions on how to resolve this issue advice is appreciated!