Mobile solutions
Home solutions
Have a phone you love? Get up to $500 when you bring your phone.
$500 via Verizon e-gift card (sent w/in 8 wks). Activation of 4G LTE/5G phone on 5G Get More plan req’d. Device must remain active for 45 days. $500 charge back if service cancelled w/in 12 mos or eligibility req’s are no longer met. See vzw.com/bring-your-own-device for details.
Help
Sign in
Turn on suggestions
Auto-suggest helps you quickly narrow down your search results by suggesting possible matches as you type.
Showing results for
Search instead for
Did you mean:
More Options
Correct Answer!
Inconsistant/misleading phone prices on the website

Rapap
Member
Too Long:Didn't read;
The prices shown for phones are inconsistent and misleading. Sometimes discounts are shown in the price and sometimes not even for the same type of discounts. There is no way to tell until you get into the buying process and get to view your cart.
Full version:
I was looking for a new phone and someone suggested the LG v60 and said Verizon usually has a deal on them. I was already looking at that phone so I checked the site and found this: 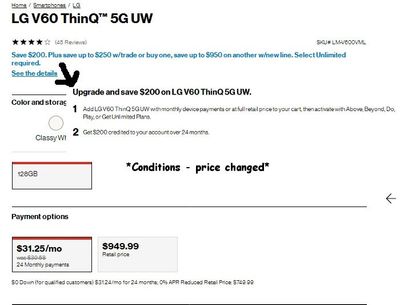 I saw the condition of needing unlimited select to save $200 so I figured that even though I didn't qualify for the deal it was still showing me the discount price. Kind of sketchy but whatever.

I started looking at a few other phones and came across this which showed the same type of deal but the price wasn't changed on the page: 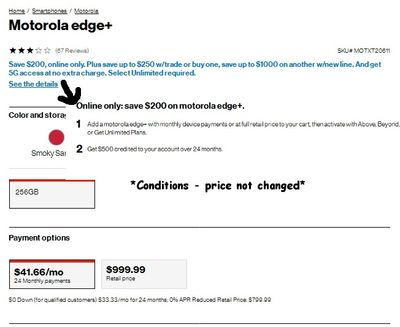 So then I thought maybe discounts aren't shown on the page and maybe the price on the LG v60 page was its actual price without discounts. I decided to hit the buy button on the LG v60 and pay careful attention to see if the price would magically change without warning by the time I got to the end. It wasn't a surprise to me when I got toward the end and told to confirm my purchase that the price was suddenly higher.

Its already questionable to show prices someone doesn't qualify for (and only reading the "fine print" would tell you that) but having the website inconsistently show discounted prices can be misleading.

I also chatted to a rep to confirm the v60 was discount price and that I didn't qualify for and that she couldn't explain why some discounts are shown and some aren't.

Just for fun I kept looking at phones and found some more: 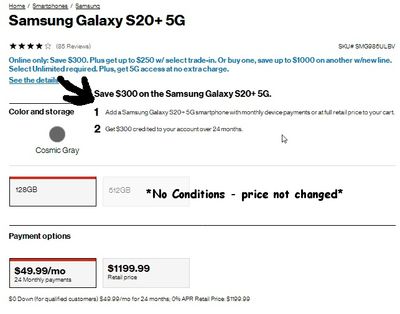 And here is another one with no conditions but the price is discounted. 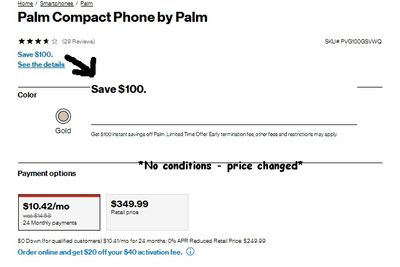 The website needs to be fixed to at least be consistent in what deals it shows reflected in the prices and which do not. It should also be made clearer if the price includes a discount and which one it is showing since there are usually multiple deals for each phone.

I have the same question
0 Likes
Reply
4 Replies
Correct Answer!
Re: Inconsistant/misleading phone prices on the website

Of course support wouldn't know because they aren't the ones who coded the website or even maintain it.

The site clearly tells you what you need to qualify for those promos be it a new line, specific plan, trade-in etc. If you know you wouldn't qualify, expect to pay retail. None of this is hard to figure out.

Nice dodge of the issue I was trying to point out but thanks for helping to prove my point?

I never said I qualified for the discount. I knew I didn't. I never said math was hard either.

And just to be clear. I was pointing out the inconsistencies of the shown prices in relation to discounts. It seems totally random if the price shown includes a discount or not. Even discounts with the same exact conditions and conditional text sometimes show the discount in the price and sometimes does not. You shouldn't have to do any math, no matter how simple, to show you want your actual price will be.

Rapap, I'm sorry you are not pleased with our website. We always provide the link to see details. However, your feedback is very important and will be shared with the appropriate teams. This is the only way change is made. Thank you for sharing your concerns.

Do you have any questions about the device you are interested in? Can I help with your order? DoloresK_VZW