Mobile solutions
Home solutions
Have a phone you love? Get up to $500 when you bring your phone.
$500 via Verizon e-gift card (sent w/in 8 wks). Activation of 4G LTE/5G phone on 5G Get More plan req’d. Device must remain active for 45 days. $500 charge back if service cancelled w/in 12 mos or eligibility req’s are no longer met. See vzw.com/bring-your-own-device for details.
Help
Sign in
Turn on suggestions
Auto-suggest helps you quickly narrow down your search results by suggesting possible matches as you type.
Showing results for
Search instead for
Did you mean:
More Options
Correct Answer!
Issues with "On Us" Promotions

I have recently added Verizon LTE Home Internet in November and it came with a few promotions.

1) Disney+ On us for 12months. I signed up right away for this and was able to login start watching without a problem - even showed up on my Verizon Add-On Page. A couple days later I received an email (late night on a weekday) that my service was Canceled when I never requested that. It is no longer on my account and this was a one time promotion. I reached out to Verizon now 3 times (spent hours) regarding this issue with different info each time. 1st time the rep said to reach out to Disney and it was their issue, when I did Disney said its Verizon's issue since its a promotion through them. Going back to Verizon I was told it was escalated and it would be corrected on their end and I would be able to access Disney+ again and it would be activated in 7-10 days - this never happened. I waited about 14 days and to follow up and address the above and had to go through everything again. They then told me they would add the promotion back to the account (it was now only showing available to add as a paid service/addon) - still never happened.  The third follow up on this the service rep just said to sign up and they would issue a $7.99 credit on the account each month for the charge. The problem is I cannot sign up for Disney+ in general now through Verizon - an error code.

Anyone else experience this nonsense with the "promotions" Verizon offers? It seems to be a common theme here as both promos given to me have failed.

4 people had this problem.
I have the same question
1 Like
Reply
7 Replies
Correct Answer!
Re: Issues with "On Us" Promotions

We always want to fully address and resolve all wireless account matters. It is a concern that there are many concerns with your wireless plan regarding discounts. Starting with Disney+, customer service agents must advise customers to cancel subscriptions using self-serve options. For clarification, how exactly was the offer removed?  -Rita K.

Unsure, I randomly received an email at 1045PM CST 3-4 days after signing up saying it was canceled. I did not request that (I'm the only one on the account) and when I spoke with someone at Verizon about it they said it was canceled the same day it was activated.

Exactly the same issue with regards to the free google nest. The tile sudden disappeared and I never received a redemption email. Called customer service and was told that the offer expired.  So it expired as soon as I got to my 65 days of continuous service....how convenient!!  I am typing this while on hold right now waiting for this to get resolved - I have been trying to resolve this for over an hour.  I should not have to jump through hoops to get this promotional offer. I signed up with you, kept my account in good standing now I want what you promised Verizon!

RESOLVED - was speaking to a wonderful agent name Sarah. Her customer services skills were incredible and she is the only reason that I am still a customer.  My FREE google nest is on the way.

This is not acceptable and not what you promised me.

I don't have the time to sit on the phone for another hour to get this resolved.  Just give me what you promised when I signed up!! 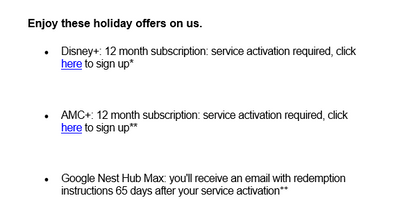 We would like to take a closer look at this matter and see what options we have available for you. Please send us a Private Note at your earliest convenience to better assist.

Same issues! I signed up for the Verizon 5G Internet and was sent a Verizon Streaming TV device for free. Wouldn't work and showed an error. Tried customer service multiple times and got the runaround. Finally went into the Verizon store and they said they couldn't help me and they called customer service for me. They said it was fixed but they would call me later to confirm. Never called, wasn't fixed and still showed an error. Finally tried customer service about 3 more times before I stopped wasting my time and threw the dang thing out. Now, I am supposed to be getting the Google Nest Hub Max for free after having Internet for 65 days. Click on the tile and it shows I have to pay, tried customer service and they didn't help at all. Extremely frustrating and disappointing as I've been with Verizon for years. Don't offer free stuff if you're never going to give it to customers. Makes me want to cancel everything altogether.