Mobile solutions
Home solutions
Have a phone you love? Get up to $500 when you bring your phone.
$500 via Verizon e-gift card (sent w/in 8 wks). Activation of 4G LTE/5G phone on 5G Get More plan req’d. Device must remain active for 45 days. $500 charge back if service cancelled w/in 12 mos or eligibility req’s are no longer met. See vzw.com/bring-your-own-device for details.
end of navigation menu
Help
Sign in
Turn on suggestions
Auto-suggest helps you quickly narrow down your search results by suggesting possible matches as you type.
Showing results for
Search instead for
Did you mean:
More Options
Correct Answer!
Lied to about promotion by Verizon

osmolyar
Member
To whom it may concern,
I have been a Verizon customer since January 2022. I switched to Verizon using a promotion where I was able to receive $500 Verizon e-gift cards for each of the four lines on my account by bringing over all of our phones which I have since happily used to pay my Verizon balance. When we first switched, my daughter and I made sure to comprehensively understand the terms of switching cell providers. We spoke to numerous Verizon chat representatives before actually switching and were told explicitly on countless occasions that the only restriction attached to the promotion was that we could not switch providers until 12 months pass. We were told explicitly that we could use any Unlimited phone plan and could upgrade phones. The only thing off-limits was switching providers within 12 months. I have records of these chats where I was told this.
Two weeks ago, my daughter upgraded her phone from an iPhone 8+ to an iPhone 13. We were offered this deal via email and directly were able to click on an "Upgrade" link in my account and were not given any indication anything would be wrong. Again, before upgrading we made sure to review the terms individually and to chat with and call Verizon representatives to check all of the terms of this agreement. After some hassle and misinformation from Verizon representatives, we were able to upgrade the phone and trade-in for $400. We explicitly asked if upgrading would compromise the $500 promotion we received in January and were told that it would not. Again, I have records of these chats. I was clearly told the terms of these agreements numerous times. I also believe that if Verizon offered me this trade-in deal directly, they are lying through their teeth to not also warn me that I would lose my earlier promotion.
A day after my daughter successfully upgraded her phone, Verizon upgraded her phone line to a more expensive data plan without our consent. When I reached out to Verizon to remedy the issue, I was told by a representative that my $500 promotion had been violated and I would either be subject to a charge-back or had to return the iPhone 13. I was told this when dealing with an entirely separate matter--another mistake and lie on Verizon's part--and then was told that Verizon would do me the "favor" of not charging me a return fee if I returned the iPhone 13 within 30 days.
I am outraged. I have spoken to numerous Verizon representatives trying to remedy this issue and myself and my daughter have each been told that we would be contacted by a supervisor on at least four occasions, which has not happened. The best that Verizon has offered is providing a $100 credit to "equalize" the trade-in value and $500 gift card I would be losing. This still sets me back $400 that I am rightfully owed.
I went above and beyond my due diligence as a consumer in trying to understand the terms of each promotion and was told by Verizon representatives that what I was doing was perfectly allowable, and that I could upgrade my phone without issue. I have dealt with countless issues from Verizon in the six months I have had service and this is the icing on the cake. Not only has Verizon lied and caused my family undue stress over possibly losing a large promotional value, we have not even been offered the respect of being able to speak with a supervisor about this issue. I am tired and fed up with Verizon's conduct. I have been told that the upgrade provision is expressly in the agreement I signed back in $500, but have not been provided a copy of said agreement at any point. Either way, I was told by Verizon customer service representatives that there would not be an issue. I should be able to trust the word of Verizon representatives and feel confident that I will not be s cammed out of hundreds of dollars by my cellular provider.
As of today I am still being offered trade-in and upgrade deals that come with absolutely no warning that they could potentially compromise my earlier promotions. This is a continuous s cam Verizon is trying to pull over their consumers.
I am posting to this forum with hopes that Verizon will please finally contact me and remedy this issue and allow my daughter to keep her iPhone 13 without compromising our $500 credit, as we were TOLD we could do. Verizon TOLD ME this would not be an issue. But here I am disputing Verizon when I thought that my understanding of each promotion was already clear. If I do not at least receive a contact from Verizon I will be considering discontinuing my Verizon service as soon as possible, telling all my acquaintances to not work with Verizon, and filing a complaint with the Better Business Bureau. This is outrageous.
I trust that this issue can be resolved quickly and that I will receive some information from Verizon as soon as possible. Please.
I have the same question
0 Likes
Reply
6 Replies
Correct Answer!
Re: Lied to about promotion by Verizon

We apologize for any inconvenience this has caused, osmolyar. This is not the experience we want for our customers, and we want to get a second opinion on this situation. We sent you a Private Note, so we can continue working on this together.

osmolyar
Member
I am posting again, upset and outraged with Verizon.
I posted just a few days ago detailing how Verizon baited and switched me on a promotion that I received when I first switched to Verizon in January 2022. I received $500 e-gift card per line for switching to Verizon and was expressly told that the only condition to avoid a switchback was to not change service providers within 12 months. I have held to this word since then. I did my due diligence and talked to numerous Verizon representatives that all told me the same thing, and I even have proof of several of these conversations.
Accordingly, my daughter upgraded her iPhone 8+ to an iPhone 13 two weeks ago. Again, we double checked to make sure that this upgrade would not compromise our promotion. We were told there would be no issue with upgrading by yet another Verizon representative.
Finally after posting to this forum we were able to get somewhere and speak with some representatives. We were promised that we would receive a call from a supervisor, which did not happen. This is not the first time that Verizon has promised me a call from upper management but has failed to do so. It is telling that the last representative I spoke with told me not to post on social media because it must be clear, even to representatives, that they are running their business poorly and are lying to customers.
Somebody please assist me and please resolve this issue once and for all. I do not have time to worry about this. My daughter does not have time to race back and forth and worry if she will have to return her phone or otherwise put us out of $500. I am sick and tired.
1 Like
Reply
Correct Answer!
Re: Lied to by Verizon again and again

Well apparently you didn’t read the bring your own device agreement..

you can’t upgrade for a specified length of time. I believe the $500 reward requires that you not upgrade through the carrier for 12 months.

“ May not be combined with other promotional offers. We reserve the right to charge the amount of the Verizon Gift Card to your Verizon Wireless account if, within 12 months, service is canceled, price plan changes from an eligible unlimited plan, or the line is connected to a device payment plan regardless of whether the new device is activated. “

Always read the fine print. You asked if you were eligible, and you were. Whether or not the person you spoke to you understood the $500 bring your own device promotion is questionable, most of them have no idea. 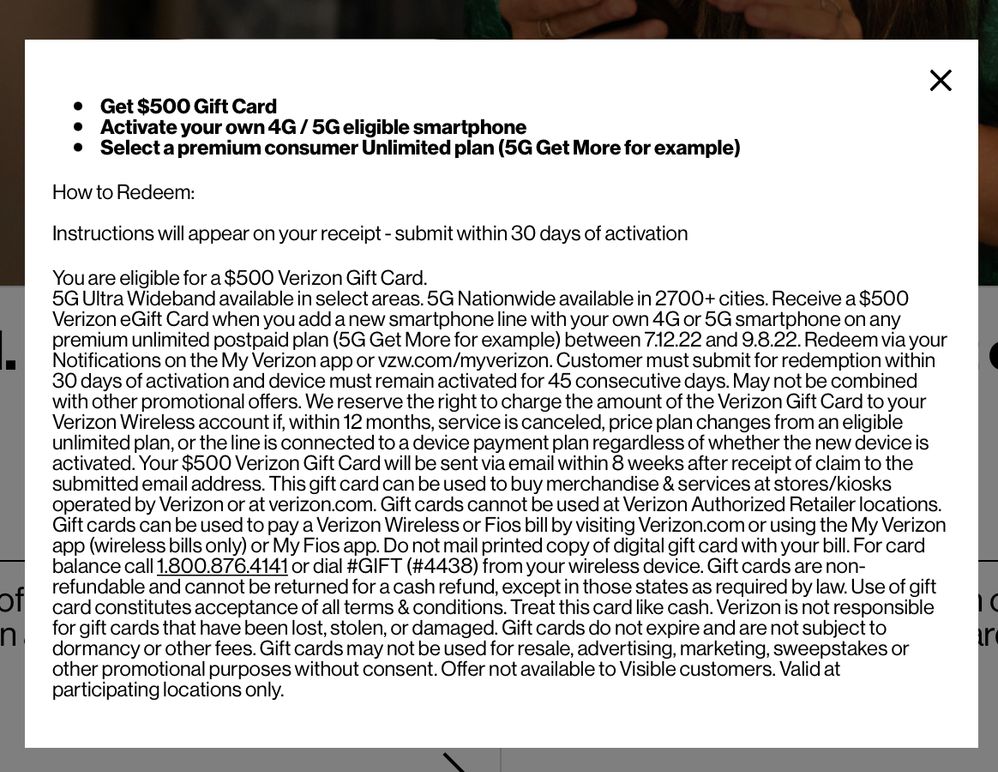 No not yet. We were told we would be subject to a charge back of the $500 if we did not return the iPhone 13. Please have someone from upper management call me ASAP as promised many times. I have been dealing with this for 2+ weeks now.

Thank you for letting us know. We want to provide you a solution once and for all. Let's access your account and check on that call back. Please meet us in the Private Note we just sent.