Mobile solutions
Home solutions
Have a phone you love? Get up to $500 when you bring your phone.
$500 via promo credit when you add a new smartphone line with your own 4G/5G smartphone One Unlimited for iPhone (all lines on account req'd on plan), 5G Do More, 5G Play More or 5G Get More plans between 11/15/22 and 1/4/23. Promo credit applied over 36 months; promo credits end if eligibility requirements are no longer met. See vzw.com/bring-your-own-device for details. Excludes Verizon Prepaid plans.
end of navigation menu
Help
Sign in
Turn on suggestions
Auto-suggest helps you quickly narrow down your search results by suggesting possible matches as you type.
Showing results for
Search instead for
Did you mean:
More Options
***Announcement: Early next week, we’ll be merging the current Fios and Wireless Communities into the all new Verizon Community! Beginning the evening of Sunday 12/4, both Communities will be placed in read-only mode. You’ll still be able to visit the Communities and browse content, but login will be disabled. On the afternoon of Monday 12/5, all users will be able to log into the new Verizon Community. We expect the new Community to be fully functional the morning of Friday 12/9. Additional details can be found in the Announcements board and under Featured Topics!
Correct Answer!
Misleading, frustrating service

I switched over to Verizon 11/10/2020. My experience with customer service has been terrible from the start of my service. Firstly, my issue is never resolved the first time, it takes several calls to see any resolution and I always have to start at square one and they are never on the same page as the representative before them or willing to honor where they left off. The current issue that I'm facing is that I bought two note20 ultra devices to take advantage of the bogo 1,000 off promotion. I made this purchase over the phone and was under the impression that this is the promotion I would receive. The transaction was unusual. The representative stated to place the order, I was required to pay a $40 upgrade fee and there was no way around it even though my line was new. She stated she would issue a manual credit to reimburse the upgrade fee and to correct the promotion. When I received the devices, I didnt see the manual credits mentioned on the call on the receipt that came with them so I reach out to customer service various times after this to get it resolved. Multiple reps said they saw the rep had this action scheduled and that i would see this on my bill. Note that each time I spoke to verizon, I referenced that I was reaching out regarding the bogo 1,000 off device promotion. I was never led to believe the promotion I received would be otherwise. I reviewed my upcoming bill today and saw that there was a $16 reoccuring credit for 30 installments. This only adds up to $500 so I was very confused. I reached out to customer service through messenger, (one of my previous attempts to get this resolved was in the chat history where I reference the bogo 1,000 off promo). The chat representative lets me know that I would have to be on an upgraded unlimited plan for me to qualify for the full $1,000 off my second device. Shouldn't this have been communicated to me at the time I purchased the devices? Or any one of the many instances I reached out referencing the promotion I believed I would recieve afterwards? The promotion states any unlimited plan. Even with that being said, I purchased the two devices in the first place over the phone under the impression that I would be receiving this promotion. I am extremely frustrated at this point and call in to speak to a supervisor. He stated that there was nothing he could do other than upgrade my line so that i can receive the full $1,000 credit. He put me on a hold to review an eligible plan at lowest monthly cost from where i am. meanwhile the  chat rep on messenger offered to put in a ticket to correct my promotion to the one i want. I told the supervisor this when he came back on the line and he said he would look into why the chat rep was saying this but that a ticket would only lead to a review where I would get the same outcome he is offering. At this point I feel like I'm being upsold, on top of the initial misleading information and frustrating customer service I've received each of the many times I've had to call about the same things. I communicate this with the supervisor and state that at that point its beyond the promotion. Its my overall experience and their response. I ask if there is anyone that i can speak to about my experience with Verizon higher up that would care. He said that would be him. The conversation was going nowhere because at the end of the day, they don't care about making things right. They care about the bare minimum perk (that increase the chances of a potential purchase from you in the long run such a free trial of a product) they can offer to "resolve" the call and still won't honor their word or take accountability. After I hung up with the supervisor I was still connected to the chat representative who switched the promo eligibility factor to I may not qualify for the full promotion because "it wasn't a new line when the devices were purchased". I would have never purchased them, or at this point became a Verizon customer had I know this is where I would be at this moment with them. 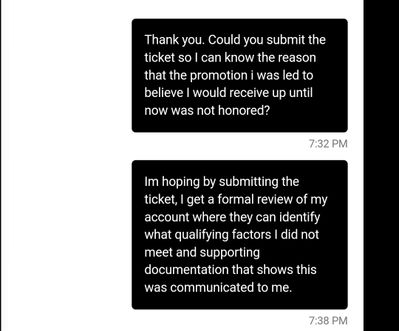 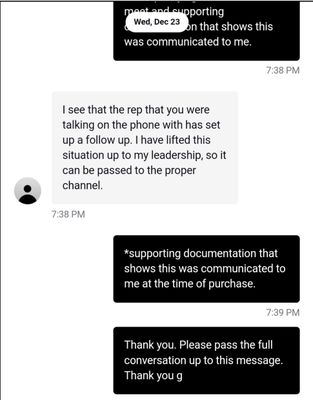 1 person had this problem.
I have the same question
1 Like
2 Replies
Correct Answer!
Re: Misleading, frustrating service

Many have this same issue seems the answer you get different from each person i.e they make up whatever you want to hear or think you do and presto once you ask about it after finding this problem get past off as not our problem too bad they were mistaken and tell you to Wait and when that time comes your promotion is over oops bait and switch if you ask me

Use spaces, that is painful trying to read a wall of text.