Mobile solutions
Home solutions
Have a phone you love? Get up to $500 when you bring your phone.
$500 via Verizon e-gift card (sent w/in 8 wks). Activation of 4G LTE/5G phone on 5G Get More plan req’d. Device must remain active for 45 days. $500 charge back if service cancelled w/in 12 mos or eligibility req’s are no longer met. See vzw.com/bring-your-own-device for details.
end of navigation menu
Help
Sign in
Turn on suggestions
Auto-suggest helps you quickly narrow down your search results by suggesting possible matches as you type.
Showing results for
Search instead for
Did you mean:
More Options
Correct Answer!
Official complaint

I was wondering how can you file an official complaint with verizon? Does anybody  know?

I had problems since i ported my number and added a line for my wife and the customer  services are indeed awful. They kept giving me false information that cost money and time.

I have the same question
0 Likes
11 Replies
Correct Answer!
Re: Official complaint

Do you think i would stil be here if it was resolved?

Cut to the head of the line.  File a BBB complaint online, it will be forwarded to upper management, and they will call you.  Much better than a 2 hour hold during a pandemic

Havasigeorge, I am sad to hear that you experienced anything less than exceptional customer service. We truly welcome you to the family, and I assure you this is not the impression we would like for you to have of us. I would like this opportunity to turn the experience around for you. I am eager to address all of your concerns and complaints. I first would like to resolve the issue you are having. What is going on? Are your phones working properly?

Thank you for the reply.

On the 02.28.2020 i called Verizon because i wanted to port my line and add my wife a new line with Verizon.
After everything was set up on the phone, the only thing left was to activate my phone but the SIM was not compatible the agent said, the he directed me to the nearest Verizon store located on 1419 Parkway, suite 2, Sevierville TN 37862.
Since i worked all weekend i asked if i can pick it up on following Monday (03.02) and i was told "no" because they can only hold it for 72hours.
Ok, me and my wife got off work early the next day, Saturday 02.29.2020, so we can go and take care of this and be done with it.
One more thing the agent said, was that because i ported a new line i can get a 250$ rebate card and instructed me to go online and apply. the code was Byophone25002282020.(i will come back to this)
We entered the store at 6 and left at 9 after closing time. In all this time, the man that helped us, AJ or TJ if my momory helps me, was trying to activate the sim without luck. he kept coming back and forth saying it will be a few minutes. after about 2 hours, i had to call my former carrier, because they have told me that my former carrier is holding my number, not letting me port it to verizon. I called them and after 20 minutes of waiting on the phone, i reached an operator and told me that from their side, everything is good, i have green to port my number. I told that to AJ/TJ and he had me calling some number from Verizon, a port center or something similar, and the lady there told me finally that the problem was all the time in verizon's yard, because the porting time is usually 72 hours. It concerns me how the Telesales person and the person from the Verizon store didn't know about this, the first telling me to go tomorrow to pick up my sim, and the latter to tell me that the problem is at my former carrier because they are not releasing my number. I have wasted a lot of my time for this.
Anyways, i am just now reaching my problem to which i am intending of making an complaint if it doesn't get solved. As i was saying i was promised the 250$ Rebate card. Before i did the online activatin for this, i called customer support to tell them that i basically live in a cabin, up on the mountain and i do not get mail up there, and i used this  address when i opened up a new line and i knew they would send the card to that address and it would have been in vain since i do not get mail up there. That is why i have a secondary address from my mother in law house and i go there to pick up the mail. I tried telling the rebate center operator this and he told me to go ahead and submit the application for the card, and then call back. I did. Another person told me after i called back that i had to wait, 2-3 weeks and then call and tell the operator to send it to a different address than the one on my bill. I waited 2 weeks then called them again and told them the same thing. Again i was told to wait till they give me an email. On 19th of March i got an email that everyhing is good and the are working on my case.
I cracked my phone the following week, and went to BestBuy to get a new phone. I had to choose from a verizon version of a Galaxy Note 10 or unlocked. I figured Verizon will work better  plus it will get added to my monthly bill. I purchased it and then i received on the 27th of March and email stating that they have trouble processing my rebate. I called rebate center for the 8th time, feels like i am making new friends there, and a rather impolite lady told me that is because i changed my phone, i shouldn't have changed it.
OK??????? Sooooo if my phone got cracked, which it did, or lost or whatever else, i am disqualified even though i open up 2 lines and ported my number???????? I am supposed to stay without a phone till they resolve my rebate which takes awfully long time considering i opened up the line on 28th of February and the time when they said it should be ready and have the card would be 29th Of April.
I spent so much time on the phone and being passed from one person to another and being told things that other operators said the opposite, it is not even funny anymore. Not to mention that when i tried to solve some problems with my internet speed i ran AGAIN into problems with the operator.
It seems to always be something when you have to call to get something fixed.
I am eagerly waiting for an answer and if possible, a way to push this forward to higher level as this has gone way to far.
Thank you,
George H

Thank you for the information. Again we apologize for this ordeal and want to help in any way we can. Let's review your account together and look into what promotions were available when you ported your line. This way we can make sure that you receive all applicable rebates or discounts. Please send us a Message in Private so that we can get started.  RogerZ_VZW

I went  to messages and inserted the username RogerZ_VZW and it is telling me to enter a valid user, as this doesn't  exist.

The requirements when you switched to Verizon may have been different than they are now.  When I switched in August, it was required that I keep my BYOD phone active and NOT UPGRADE, for 6 months.   The more recent and current requirements are only 45 days. That means you could not buy a new phone/replace your phone/upgrade before April 13th.  Which hasn’t happen yet, that’s this coming MONDAY.

Dont know what Verizon will say, but you voided The deal, and don’t qualify. 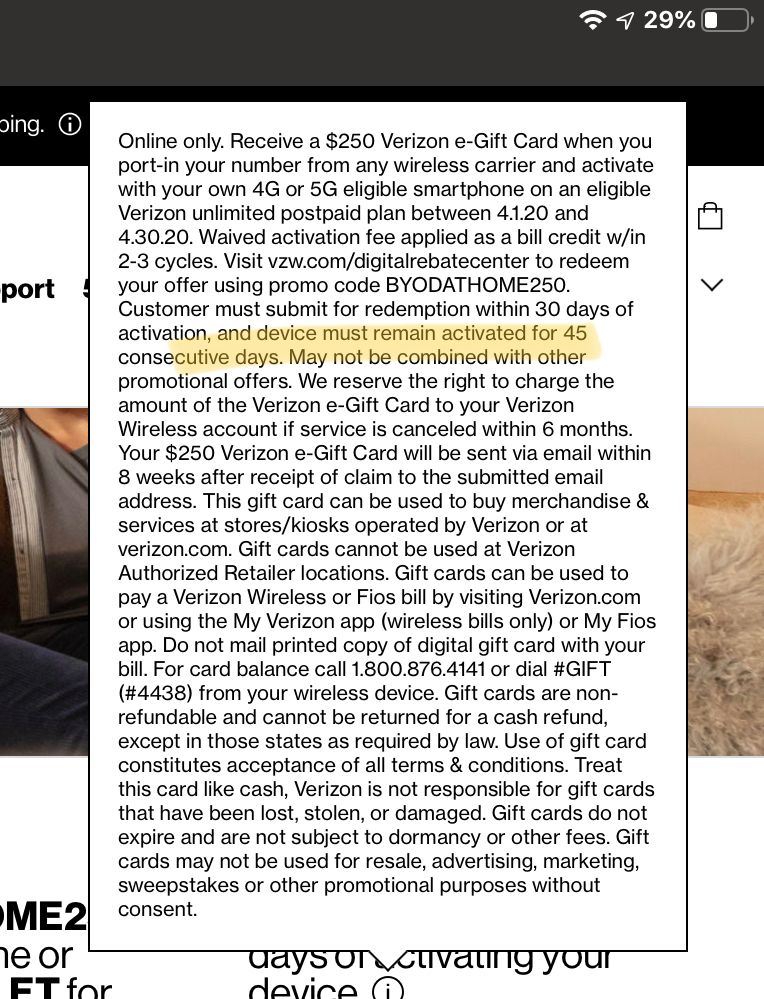 I see two problems here. Nobody said anything about any of the requirements, and second,  what are you  doing if you are in my case? And broke your phone and cannot be used?