Mobile solutions
Home solutions
Have a phone you love? Get up to $500 when you bring your phone.
$500 via Verizon e-gift card (sent w/in 8 wks). Activation of 4G LTE/5G phone on 5G Get More plan req’d. Device must remain active for 45 days. $500 charge back if service cancelled w/in 12 mos or eligibility req’s are no longer met. See vzw.com/bring-your-own-device for details.
end of navigation menu
Help
Sign in
Turn on suggestions
Auto-suggest helps you quickly narrow down your search results by suggesting possible matches as you type.
Showing results for
Search instead for
Did you mean:
More Options
Correct Answer!
The Curious Case of the Missing BOGO

This story is several years in the making and will take some time to fully explain.  Thus why I am posting it here and not on an instant messenger or *shudders* a phone call.  Truly I wish Verizon Customer Service had an e-mail address, it would make this so much easier but there's little use in crying about it.

Our story begins on January 19 2019.  My sister and I went in to the local Verizon with our mother in order to add her to our family plan and to examine the possibility of upgrading our iPhone 5cs.  There was a new guy and an experience employee (possibly a manager but not sure) working that day.  Our mother chose a Samsung Galaxy and my sister and I were persuaded to upgrade that day as well because of a BOGO deal.  (I later learned that the specific deal was OST:223171)  I had done research and concluded that we should get iPhone XRs but foolishly allowed us to be persuaded into buying the Google Pixel 3s instead.  We got everything set up and they assured us that the BOGO would kick in after a couple of billing cycles.  As the day went on, we found ourselves very unimpressed with the Pixel 3s and by the next morning had both decided that we would rather pay the restocking fee and get the phones we really wanted than stick with these phones.  So we went back that day (the same new guy and experienced lady were working again), payed the restocking fee, and got set up with iPhone XRs.  We were assured that the BOGO deal was still running and that it would once again show up after a few billing cycles.

After a few billing cycles passed, we didn't see any drop in our payments.  At the time our father was the primary account holder so we couldn't really see the bill because he is not super tech savvy.  We tried getting the information from him but he couldn't see anything like what we were looking for.  Eventually Sheena went back to the Verizon store to find out why we were both still paying full price installments.  They assured her that the deal was in effect and the refund was being applied to the main account rather than an individual line.  We weren't sure what that meant but without being able to see the bill in detail, we couldn't refute it either.

As the year ended, my sister took over as the primary account holder because my father had retired.  We were finally able to get a good look at the bill and determine that there was nothing being refunded or added the account and that both payment plans were adding up to the full price of two phones.  Then COVID hit and everything shut down.  We had to sit on our hands for months and months waiting for the Verizon store to open back up again.  In the meantime I tried contacting Verizon customer service through instant messaging.  The representative helping me was unable to find the deal and finally told me that the verizon store we had shopped at was a "satellite store" and was able to run deals of it's own.  As such, she was apologetically unable to help me.  Therefore we waited for the Verizon store to open back up for business.

Late last year, we were finally able to get to the store (after a two hour wait to boot do to COVID procedures and a line).  We explained the situation to the guy working that day but he was unable to help because the situation was too old.  He did find the deal number for us (the OST:223171 from before) and assured us that his store was by absolutely not a satellite store.  His thoughts were that the deal hadn't kicked in because we hadn't added a new phone to the account, which was required for the deal.  We left quite upset, not at him but at the situation and the fact that it seemed like we were going to be cheated out of $750 dollars due to a technicality even though we still have the paperwork with the BOGO deal written on it in black and white.  Then we remembered what we had forgotten while we were talking to him.  That we had indeed added our mother to the account that day (this is why I don't like talking or even texting for customer service, no time to think) and therefore that explanation did not work. We have cooled off now and the phones are payed off, full price for each one.  Still no sign of a refund of any sort.  My leading theory is that the change from Pixel 3 to iPhone XR was the source of the glitch or perhaps a mistake from the person working their first and second day.

My question now is, will Verizon make this right?  $750 is a drop in the bucket for such a large company but it is an awful lot of money to us. 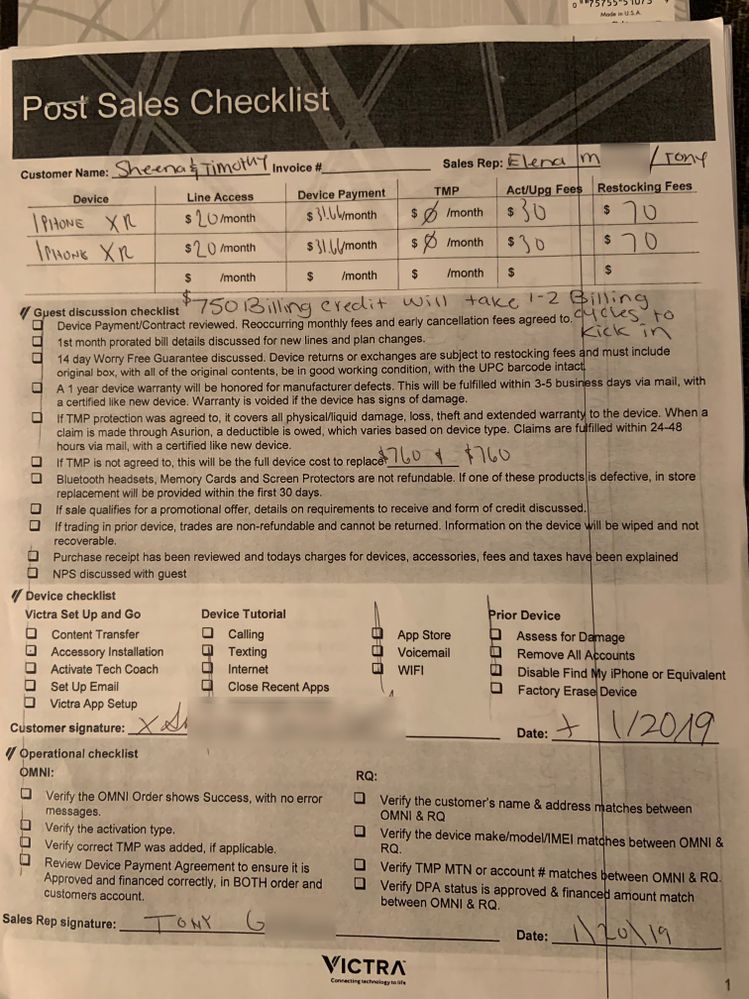 I have the same question
0 Likes
Reply
1 Reply
Correct Answer!
Re: The Curious Case of the Missing BOGO

Thank you for this wealth of information, We would love to help get this resolved for you ASAP, TK, so we can get to work immediately, please send us a Private Message, don't worry, you don't need to resend this explanation.