Help
Sign in
Turn on suggestions
Auto-suggest helps you quickly narrow down your search results by suggesting possible matches as you type.
Showing results for
Search instead for
Did you mean:
More Options
Correct Answer!
Upgrade rip off?

Labels (1)
Labels
I have the same question
0 Likes
5 Replies
Correct Answer!
Re: Upgrade rip off?

In the past, the message advising of the eligibility to upgrade appeared when a current two year contract had been satisfied.

I'm on the old More Everything Unlimited Talk & Text with 1GB of data plan. After my two year commitment expired, I replaced my old Samsung Galaxy S4 with a Samsung Galaxy S7 Edge...which I paid for upfront.

The message telling me that I am eligible for an upgrade...which first appeared when the contract expired remains visible to this day. So this leads me to believe that it has something to do with the terms of an existing contract.

Verizon Wireless really doesn't have any contract plans at this point, so, most people can upgrade their phones at any time as long as the current phone is fully paid off.

Wife went to verizon store with a Moto Droid that would not turn off and just showed the Motorola screen. She was told the software was fried and she needed a new phone. Insurance would not cover it and no trade in value because it was fried. She was talked into a 9S. $900 later she comes home. I took the droid and pressed the power and volume keys. The phone rebooted and works just fine. No need for a new phone, no need for an upgrade, just ripped off by salesman.

EXACTLY WHAT I WAS TRIPPING ON RIGHT NOW THEYRE ALL UPGRADE TIME YAYYYY SO IM LIKE OK . And they say ok so give us you’re thousand dollar phone and pay full price for this one YAYYYYY 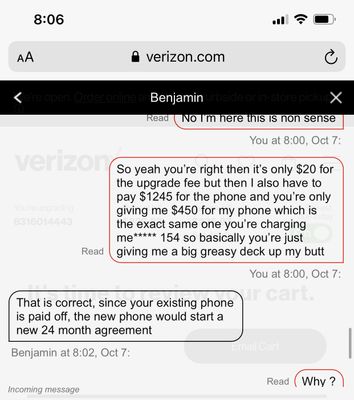