Mobile solutions
Home solutions
Get up to $500 when you bring your phone. Plus, waived smartphone activation fee when you buy online. Limited time offer.
$500 via Verizon e-gift card (sent w/in 8 wks). Activation of 4G LTE/5G phone on One Unlimited for iPhone (all lines on account req'd on plan), 5G Do More, 5G Play More or 5G Get More plans req'd. Device must remain active for 45 days. $500 charge back if service cancelled w/in 12 mos or eligibility req's are no longer met. See vzw.com/bring-your-own-device for details. And for a limited time, we’ll waive your activation fee when you order through vzw.com or My Verizon app. You’ll see the one time charge waived as your “Due Today” amount at checkout.
end of navigation menu
Help
Sign in
Turn on suggestions
Auto-suggest helps you quickly narrow down your search results by suggesting possible matches as you type.
Showing results for
Search instead for
Did you mean:
More Options
Correct Answer! Jump to solution.
Wont honor quoted price

Over the past few weeks, I have been trying to get new service with Verizon.  I have spent multiple days and so many hours in the store, on the phone, or chatting.  Never knew it would be this hard to do something very simple.  Here is the long version of what has happened:

My wife and I are young and recently married so we were both on our parents' Verizon accounts.  I wanted to transfer these lines and phone number to an account in our names and upgrade to new devices.  So, we started by going to the local Verizon store to get a quote.  Went in and the sales crunched some numbers and quoted us about $150/month which was fine.  However, he couldn't complete the process because our numbers had to be released from our parents' accounts.

So, we left the store and I started a chat with Verizon.  I had the agent to run us a new quote just to be absolutely sure what the salesman quoted was correct.  She quoted me $142.86 with the new devices, trade in credits, insurance, etc.  I have screenshots of this quote which I will attach if I can.  But, she could not complete the order either.  She said I must call into a special department to get the numbers transferred.

So, I call in to Verizon.  The agent got the numbers transferred over, then gave me a quote that matched what the online rep gave me.  But, she could not complete the order either.  She said that since I was doing a trade-in, I must go online to complete the upgrade process.  I went online to do this and got a "validation failure" message.    Called Verizon again and was told to go in the store to complete the order.  I was told that the store would wave the additional activation fee for ordering in store since the online process would not work for me.

We went back to the store.  The salesman moved very quickly and was quite pushy.  He rung up everything, then said I would get a link on my phone to submit a payment.  I opened the link and it was saying I would be charged about $240 up front meaning that the activation fee had not been waived.  I then asked the salesman about this and he and the manager explained that they could not waive that fee.  So, I then asked him about the monthly cost.  He pulled up his quote which was about $260 per month.  This was outrageous and I told the manager about the quotes I received in store, online and over the phone.  He said that he could not honor any of them and has no control over what the phone and online agents quote me.

We then leave the store and call Verizon (again). Talked to a rep who quoted us the same price as before and was able to complete the upgrade and trade-in order for us over the phone, or so we thought.  The order was complete. but I noticed the devices did not ship.  Had to call multiple times to figure out what was going on.  I was first told that they were backordered.  Called again and a different agent told me my order was awaiting manager approval.  About a week later, my phones finally arrived and the packaged did not contain any labels, packaging, or instructions for returning our trade-ins.

So, I called Verizon again!  Was told that there is no way that the agent took care of the trade in process because that can only be done online.  So, I go online to request the trade in kit and got the same "Validation failure" message again.  Started a chat with a Verizon agent who told me that he could not order a trade in kit for me, but a phone agent would be able to.  Called Verizon again.  They could not figure out what the issue was, but set me an appointment at the Verizon store to complete this process.

So, now I am back at the store for the 5th time in three weeks.  Salesman puts in all the details and quotes me a trade in value that is about $400 less than what I was quoted over the phone.  This would make my bill about $40 more than what I was quoted.  Again says he has no control over what the phone and online agents quote.  So I call Verizon again.

The first agent says that she has found the promotion and is working to get it applied to my account.  Somehow, we get disconnected.  Called back.  This time the agent says that he is not sure what promotion the other agents were using in the quote and that there was no way he could honor it.  He said that the best he could do was $162/month which is $20 more than I was quoted.

Short version: Verizon refuses to honor their quoted price.  This is absolutely the worst customer service experience I have ever had.  I have been with Verizon through my parents' plan for years and thought I would have a good experience.  I would not have ordered these phones if I knew I would have this much trouble.  I need Verizon to honor their price or I will simply return the devices and end my contract.

2 people had this problem.
I have the same question
2 Likes
Reply
1 Solution

Wanted to provide an update to be fair.  I received a private note which lead to me chatting with an agent.  I chatted for a little over 3 hours and was offered a number of different solutions that were more expensive that what I was originally quoted.  Eventually, an agent was able to get a member of the leadership team to allow what was called a "one time exception" so that the original quote could be honored.  I am happy with this solution, but it definitely shouldn't have been this hard.

I have checked my next bill and I can see the changes reflected there.  Hopefully, it will continue to give me this credit for the duration of my 24 payment period without any issues.

This is the quote the online agent gave me. 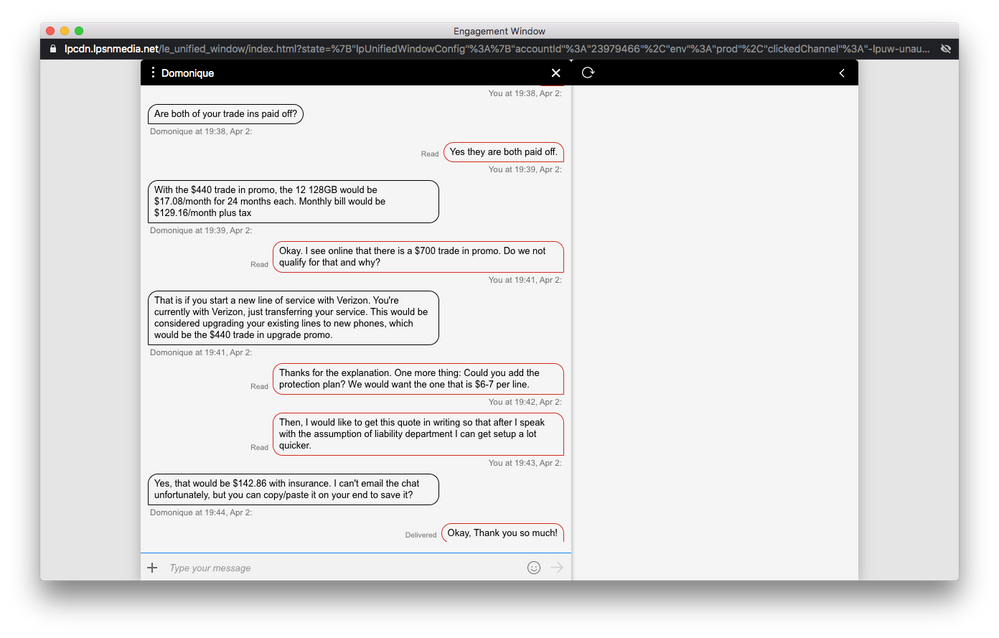 Here is the quote I got from the agent.

I too purchased a new phone based upon a trade-in promotion which Verizon later refused to honor. The promo trade-in offer was $400 and I submitted a rarely used, like new phone in perfect condition. Upon receipt, the credit they offered was $33! I have wasted hours on the phone trying to get the issue resolved and each time I am told there will be follow-up but nothing is done. Multiple times I have been on hold for over an hour just to be disconnected. It is extremely frustrating because once the purchase is made and the trade-in sent to them there is no recourse for holding them accountable to their original agreement.

This is similar to the Wells Fargo scam where their management condoned the deceitful practices and misrepresentation committed by their representatives. Hopefully, if enough of us file complaints there will be similar government and legal intervention. Please make sure to file a claim with FTC (“reportfraud.ftc.gov”) and FCC (“consumercomplaints.fcc.gov”).

Also make sure to advise colleagues, classmates, families, and friends about Verizon's deceitful practices, allowing them to go elsewhere and avoid suffering the same abuse.

I will be filing a complaint with the FTC and FCC.  Thank you for informing me as I didn't know about this.

It definitely appears that Verizon is purposefully using deceitful practices to lure customers into a contract without true intention to honor promises that they make to customers which is awful.

First part was typical Verizon system problems. If you ever had the misfortune of seeing behind the seens, it would amaze you how laggy and prone to breaking their systems are. Glad to see all their profit went to lining pockets and not their tools. /s

Store reps and support reps need to seriously stop that garbage with "waiving". Stores can't and Care isn't supposed to. It creates a horrible experience for everyone by not being transparent.

Same goes for this "honoring". Prices are set and easily viewable online. You take the name of your plan and the cost per line to figure your cost. Always do the math yourself. All of Verizon's current plans have a $10 difference wether you autopay or not. From there you add extras like insurance, phone payments etc.

We know how important it is to get assistance when things turn out in an unexpected way. We would be happy to apply an extra set of eyes to this matter. What was the reason listed for the adjustment in this appraisal?

When I went into my local Verizon store, the agent said that for some reason the system was applying a promo to one phone and not the other.  The Iphone X gave a trade in value of $550+ while the 8plus only gave $114.  He said that he was unsure why the system was doing this.  He told me himself that since I traded in two phones, that I should have received the promotion on both phones which would increase the trade in value of the iPhone 8 plus to $500+ which is what I was originally quoted. But, he stated that he could not change it and he can only do what the system allows.

I called customer service and spoke to a rep while in the store.  We spent almost an hour on the phone.  She said that she was able to find my original quote and also found the promotion.  She said she was working on applying the promotion to my account.  Then, we got disconnected.  I called back and spoke to another agent.  This time it is a male agent and he says that he has "looked high and low" and he is not aware of any promotion that would give me what I was originally quoted.  He eventually finds one that would require me to upgrade to a more expensive plan, but give me higher trade in value.  But, this still leaves me paying $20 more per month than I was originally quoted which is unacceptable.

Thank you for confirming that for us. Were you sent an email that lists the reason for the quote being adjusted?