Help
Sign in
Turn on suggestions
Auto-suggest helps you quickly narrow down your search results by suggesting possible matches as you type.
Showing results for
Search instead for
Did you mean:
More Options
Correct Answer!
Price Flip?

Several days ago, I was searching plans for a new Verizon branded-cellphone I bought elsewhere, and this special came up, but when I clicked on it, and proceeded forward, the regular price was in the shopping cart.

Long story short, I signed up with a PagePlus $30.00 plan, due to this "bait and switch."  If this was for real, with no change in price after some period of time, I wanted to get it.   I have been with Verizon's prepaid since Verizon bought Alltel for $28 Billion in 2008.

I had hoped a CSR could have chimed in on this matter, but apparently, I shouldn't hold my breath.

Either Web Weaver messed up, or my web browser had a glitch, but either way, that photo above clearly shows there was an option for a lower price, but their shopping cart showed full price.

I apologize for any confusion this has caused, Jabot. I'm sorry to hear you left the Verizon Wireless family. I will certainly submit your feedback on this experience. We currently have the option for you to get a 3GB plan for $30. You can find additional information on our Prepay plans using this link. https://www.verizonwireless.com/prepaid Does this help clear up the details?

Gerson_VZW
Follow us on TWITTER @VZWSupport
If my response answered your question please click the _Correct Answer_ button under my response. This ensures others can benefit from our conversation. Thanks in advance for your help with this!!

We currently have the option for you to get a 3GB plan for $30.

The other day, I had a chat with "SAM,"  Reference number: [removed]

Within that chat is the MEID of my Kyocera DuraXV LTE cellphone.

Currently on Verizon, I'm using a Samsun Gusto3 on this "Alltel

do not have a Verizon SIM for Kyocera cellphone.

1.  Is it possible to have a Verizon SIM sent via US Mail, transfer

existing cell number (0126) to this new cellphone when its activated,

without going thru this process online?

2.  Will I have to reset this cellphone before dropping in the new Verizon SIM?

My apologies, Jabot. It looks like what you may have seen was promotional pricing. At this time the only $30.00 prepaid plan we have to offer is the 500MB with unlimited talk and text. I know you stated that you would like the 3GB plan. At this time that plan is $40.00/month. I will still provide the information to your questions, please see below.

1. We do not have the ability to ship SIM cards. One can be shipped online, or you can visit any local Verizon Wireless corporate store location for a free one. Here is a link to our store locator: http://spr.ly/6584DN52i . We can definitely assist with the porting of your phone number. This can be done over the phone by calling our telesales team at (800)-256-4646. They will be able to assist with creating the account as well. You even have the option to message us on Facebook or Twitter. We have a social media customer service team that can assist with creating the account and porting the number in.

2. No, you would not have to reset your phone prior to inserting the SIM card. If you had any questions as far as the device being compatible with our network, please use this link for assistance: http://spr.ly/6585DN52c

Does this information help?

Marshall_VZW
Follow us on TWITTER @VZWSupport
If my response answered your question please click the _Correct Answer_ button under my response. This ensures others can benefit from our conversation. Thanks in advance for your help with this!!

The only explanation for this price flip is I think the protection plan ($10.00/month) triggered the discounted price of $30.00/month with 3 GB.  I had previously inputted this protection, but discarded it on a later try.  I know nothing about cookies, or Verizon's web design, but I suspect cookies or web design kicked in this pic showing a reduced price.

Needless to say, this flip-phone has a two year OEM warranty, which means Verizon would only "eat" mailing/handling cost if it was replaced.  Statistically, I suspect there would be few people with this flip-phone who would use this protection plan, so offering a $30.00/3GB plan was really a $40.00 plan incognito.  Hence, a price gimmick where customer feels good, but Verizon only takes a small loss.

>Does this information help?

Information is helpful....but a lower price is always welcomed:-)

I believe the finger of blame points to Verizon's online programming.

Review - I was an Alltel pre-paid customer when Verizon bought out Alltel in 2008, and I still have a Verizon account with this flip-phone.  Several weeks ago, I attempted to use a new Kyocera DuraXV LTE to purchase a plan, and this plan showed $30.00/month with 3GB data (see photo in previous post)., but checkout showed $40.00.  So, I canceled this transaction, and made a post on this topic, cited above in first sentence.

Today - I tried again, and online program showed $30.00/month with 3 GB data; so I continued thru online process, and got this 3GB plan, with an order number and invoice.  But, since this new phone did not initialize, I called a CSR, who latter handed this over to a supervisor/manager, who informed me this order was invalid-didn't go thru-since this other phone is CDMA.  And, I would have to drop this "Alltel" prepaid, and switch to a LTE based plan, which I said no.

Hence, Verizon's online program saw I had an existing phone, so it gave me a discounted price, as shown on invoice, but nothing happened (is what manager said) to initialize this phone.  In theory, my credit card was not charged, and I am still using PagePlus, after reinstalling their SIM.

Thus, an online programming error has caused this issue, and I can't get this new phone at $30.00/month with 3GB, as invoice indicates.

I was attempting to get both phones on the same account...but this is a no go apparently with two different phone types (CDMA vs LTE).  It would be nice to have this discounted price, as shown on invoice.  I had planned to port the new phone's number over to old phone's number, within several weeks, but I doubt if this is possible with that 3GB/$30.00 discounted plan.

The $10 difference is the multi line discount. 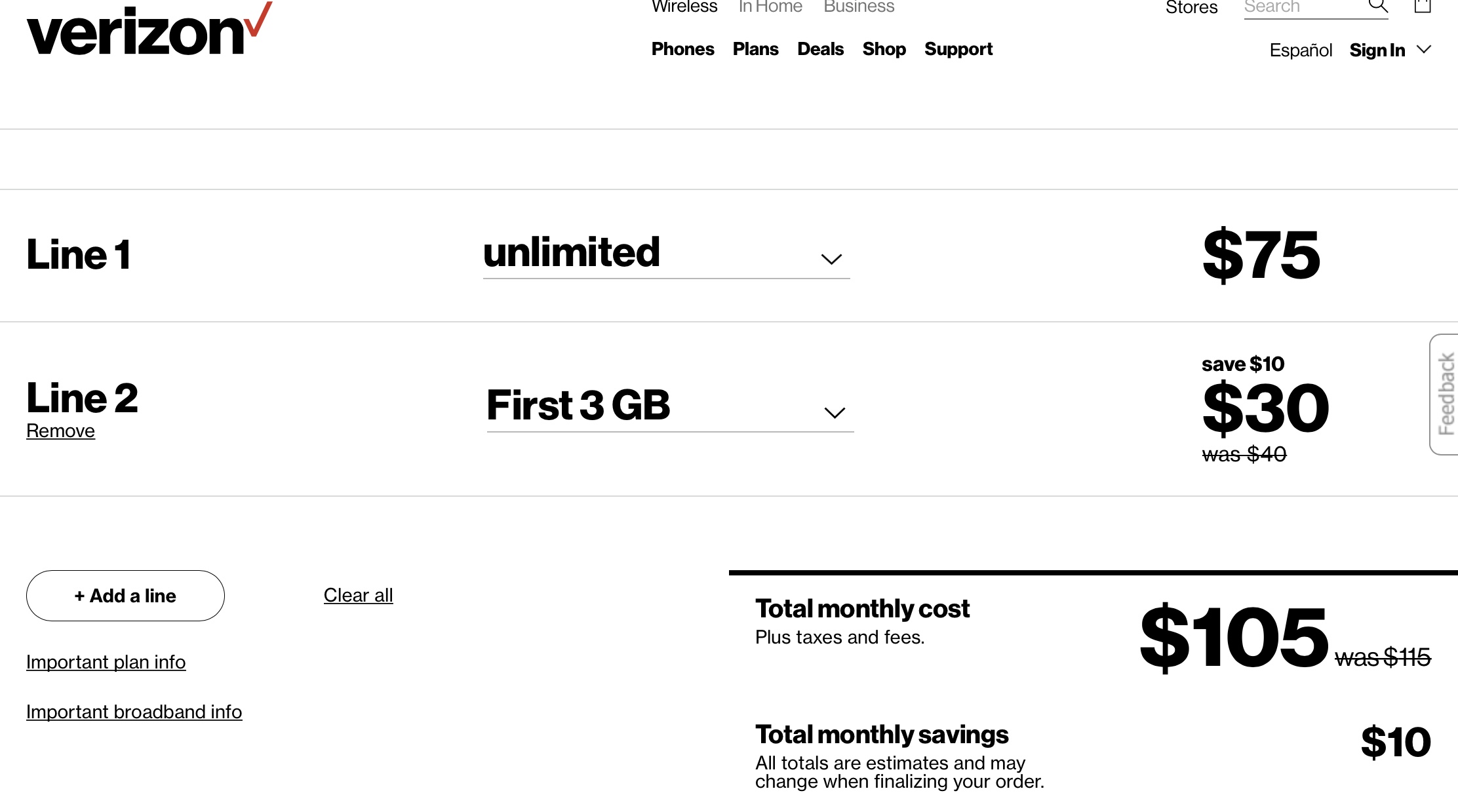 Let me explain....Verizon's online program allowed me to secure a $30.00/month plan with 3GB data, but this Verizon programming error has now charged me $32.61, and I am without this service. Phone could not be activated...see post seven above.  [removed] CSRs involved me I would not be charged, and this transaction would not be charged my credit card...Right.

Programming Error - Online program, since I was logged-in, assumed I had a LTE plan on existing account, instead of a "CDMA" plan (Grandfathered Alltel).  So online program allowed me to sign-up for a $30.00/month plan with 3GB data.  I have a printed invoice showing I have this plan.

So, here I am, Verizon has taken $32.61 from me, Transaction has posted, my LTE flip-phone did not initialize, and apparently, CSRs here can't forward this matter to their supervisor/manager.

Restating - Verizon has a programming error, and I got trapped in it.  It should not have authorized this transaction on an account using a CDMA cellphone (Grandfathered Alltel users).

Question - Are forum CSRs suppose to assist when Verizon has a programming error?  I have proof...