Mobile solutions
Home solutions
Have a phone you love? Get up to $500 when you bring your phone.
$500 via Verizon e-gift card (sent w/in 8 wks). Activation of 4G LTE/5G phone on 5G Get More plan req’d. Device must remain active for 45 days. $500 charge back if service cancelled w/in 12 mos or eligibility req’s are no longer met. See vzw.com/bring-your-own-device for details.
end of navigation menu
Help
Sign in
Turn on suggestions
Auto-suggest helps you quickly narrow down your search results by suggesting possible matches as you type.
Showing results for
Search instead for
Did you mean:
More Options
Correct Answer!
Note 10+ 5G (not a 5G phone, only supports UW)

Verizon sold and marketed the Note 10+ 5G as a 5G capable device.. and repeatedly said there would be an update to make the device 5G capable, then they continued stalling telling everyone it was being rolled out city by city, and published lists..

It has become known now that this device has a radio that is not 5G capable with the Nationwide 5G network. It only has a UW radio, which means if your in a major city, it might work in a downtown area, a highend shopping area, an arena, stadium, or amusement park. But it will not have 5G service in neighborhoods.

I have called repeatedly, argued with people repeatedly, and no one is ever aware the phone does not support 5G. After I explain to them that it doesnt support it, and that I have changed plans, had new sim cards shipped to me, and received updates on my device, and it still doesnt work, they continue to claim its because im in an area with no 5G coverage or that theres some other issue. Their staff is uninformed about these devices.

I have spoke with at least a dozen people now, on at least a half dozen calls.. there was an original thread on here with 12 pages of posts, which a moderator closed recently due to the fact people have been complaining since 2020.

I have told the last couple people I spoke with I refuse to trade in my $1300 device, for an $800 credit and start making payments again to own a device with half as much storage and no SD slot, just to get the 5G service this device should have had, as it was advertised.

I'll post some more links... and some technical info so you can all be better informed as to whats going on. But I have seen reports of the Note 10 on other carriers having 5G service.. but apparently those devices have different chipsets in them.

1 person had this problem.
I have the same question
1 Like
Reply
9 Replies
Correct Answer!
Re: Note 10+ 5G (not a 5G phone, only supports UW)

Hopefully someone at Verizon will see this..

Here is the previous thread on Verizons site.. (it wouldnt let me post the URL) So here is a clean URL..
http://tinyurl.com/verizonnote5g

Here is one of the Reddit threads about this..

Here is a review for the device on Amazon..

What was the solution? Buy a new device.. that any 1st generation 5G device Verizon sold is not compatible with Verizons Nationwide 5G network.. Which I dont think is a valid solution.. Verizon should acknowledge this and offer something to everyone who bought these devices.. I dont buy a $1300 phone regularly.. and when I do I keep it several years.. it took 3 years to pay off the device on a 36 month payment plan. 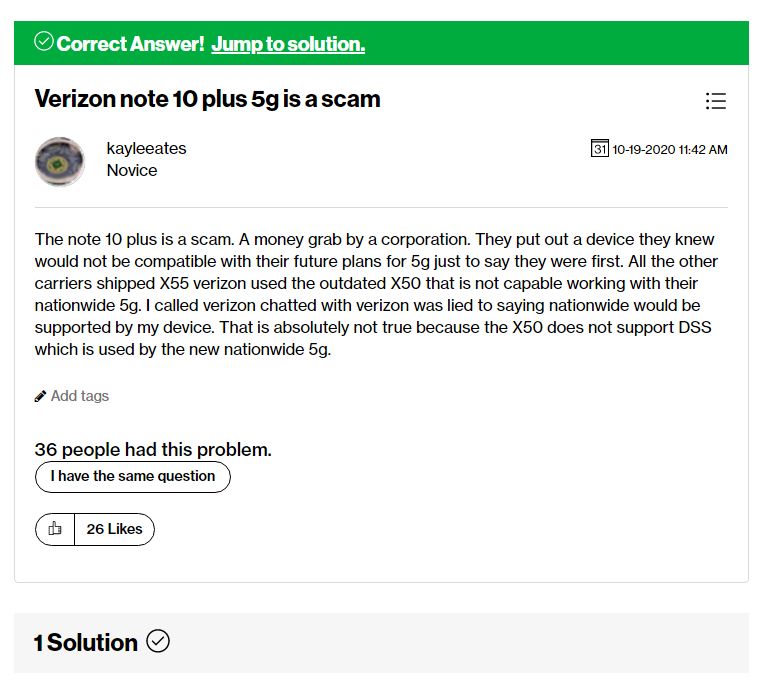 Here is yet another thread on these forums..

Hello, SYNTAXER.
Thank you for reaching out to us in regard to your device. First and foremost I want to make sure you're aware that devices are named by their manufacturer, not Verizon. We understand you feel misled and would like to look into this. Have you attempted to use a 5G SIM Card in the device?
Please feel free to send us a Private Note, so we can review options to assist.

We're here to assist with any questions or concerns that you have. Please, send us a Private Note to get started.

This is concerning to hear, we need to take a closer look into this with you. Please send us a Private Note.

I was told at the time of purchase that eventually the network would be expanded to "5g" so I SHOULD go ahead and buy the phone and pay the extra $10 a month. Here we are nearly 3 years later and I've never gotten 5g. Verizon says it's my fault for living in a part of Phoenix where 5g is not offered. Then I was told to be patient and wait for updates. Then they tell me Verizon shifted gears and went away from ultra wide band and my phone doesn't support the 5g network they use. Now they are saying 4g lte is the same or better than "5g".. All lies!  All I want is a device that gets 5g as I was promised and to stop being lied to. Verizon's solution: "technically you weren't lied to and go ahead and pay off your phone and give us more money!!" As soon as I can I will be leaving Verizon just on principle alone. Why should I pay off this lie of a phone and give your company more money??

We want you to have a phone that will provide you the 5G network you expect to have. Please meet me in private note to look into your available options.

Yes. I was ripped off. Also wasted

much time on this disappointing phone. Gave up got a new phone.

PS I also updated Sim card. Does not help.