In-Store or Curbside Pickup: (excludes prepaid):
Same-day delivery: Same-day delivery is available in select areas.
Sign in
Help
Turn on suggestions
Auto-suggest helps you quickly narrow down your search results by suggesting possible matches as you type.
Showing results for
Search instead for
Did you mean:
More Options
Correct Answer!
Re: S7 & S7 Edge Battery Drain

FYI for anyone experiencing the same issue.

I've completely given up on Verizon tech support since they are unresponsive (still no one have gotten back to me in two months) and in my opinion completely inept at basic levels of customer service.

I am now simply awaiting the next software update and if this doesn't happen by March, [removed] action.  I will do my best to update this thread with my progress.

It is quite possible they have dropped support for this model immediately after crippling its battery life irreparably. They call this "sunsetting" or "end of life" (EOL) which is a normal thing to do, but it is immoral to do this when a device has been hampered so much, illegal if they are caught doing this on purpose.

I apologize to those of you in the community who have this same issue and like me, expected an answer on this thread. I have spent many hours typing all of these replies on this thread from my phone so I could watch what my battery is doing (7% in the few minutes typing this one).  The lack of actual work or communication from VZW is total negligence to their paying customers, but is quite common in the telecom industry as a whole.  One should not have to cope with such ineptitude, but I digress.

Installing now, then will factory reset one device, not for other 3.  Will post update on pro/con after a few days set-in and usage for fellow S7 and S7Edge users.

Installed latest update on all 4 S7 devices.  On two devices I then factory reset, on two I did not.  All still suffer the rapid battery drain, increased heat generation, and reduced performance that has plagued these phones for about 6 months.  If someone finds a solution, I welcome and appreciate your input on this thread.

No response from Verizon customer care, but they have my number should they choose to contact me.

I'd suggest reaching out to Samsung for your device issues for the best optionssince they're the manufacturer of the hardware and developer of the software so they would have the most knowledge regarding those types of problems.

I have been having the same problem since August 2018 OS push.  It has gotten much worse since a Feb 2019 push and unbearable after April 2019 push.  Phone will discharge in less than a day even with killing all background apps with a fresh charge.

I am so sick and tired of VZ technical support telling me my phone is too old (actually 1.5 years) and I need to buy a new one.  A review of battery drain on all apps including Android apps shows that the OS is killing this phone.

Verizon Tier 2 tech support remotely reset my phone in August 2018 due to OS push that made basic phone features (like calling, blue tooth, texting) unusable.  He did so without backing up and I lost everything.

A call to Samsung support confirmed that a recovery restore will simply re-install the same flawed OS and that the phone needs to be re-flashed by Samsung.

I'm having problem with battery drain from Android OS since update 30. Any solution to the problem?

We would be happy to help! How long would it take to go from 100% to 10% or lower? Do you see that your device gets hot to touch? MichelleH_VZW

Thank you for your response. Here's the battery usage with the phone in SAFE mode: 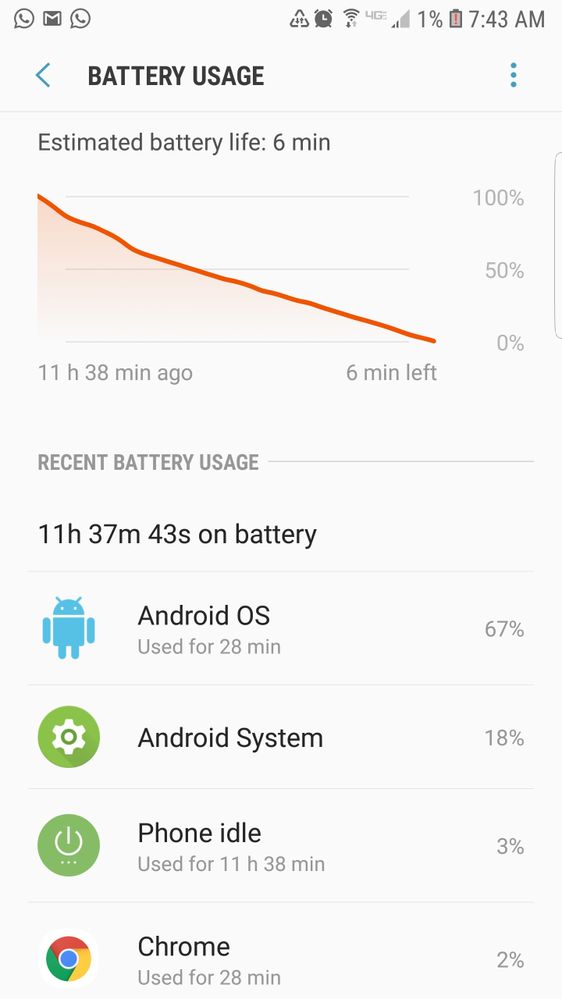 yman1437, thank you for the screenshot. Please keep in mind that the battery life decreases with time and usage. Looking at the picture we do see that the last time the device was charged was almost twelve hours ago, which is not bad. We also see that the operating system used quite a bit of battery. Was there any update or stock applications running in the background at the time?