In-Store or Curbside Pickup: (excludes prepaid)
Same-day delivery:
Sign in
Help
Turn on suggestions
Auto-suggest helps you quickly narrow down your search results by suggesting possible matches as you type.
Showing results for
Search instead for
Did you mean:
More Options
Correct Answer!
Screen draining battery

After the Marshmallow update the screen is draining 50% of my battery. This is completely unacceptable. How do I fix it? Or do I have to wait another 6 months for Verizon to bother addressing it?

kgaff, having a long last battery life is curcial. Let’s look more into this. How fast does the battery drain? Currently, how often do you use your device?
ZangY_VZW
Follow us on Twitter @VZWSupport
If my response answered your question please click the �Correct Answer� button under my response. This ensures others can benefit from our conversation. Thanks in advance for your help with this!!

Or do you mean that the battery is being depleted faster than before Marshmallow?

Are you sure that it's not just because you're using the phone more than usual, because you're checking out the new Marshmallow features and characteristics, and that active use -- which uses the screen -- is causing a faster drain of the battery?

FWIW, my battery is not draining faster on Marshmallow, even though the screen is the biggest battery user -- as usual. 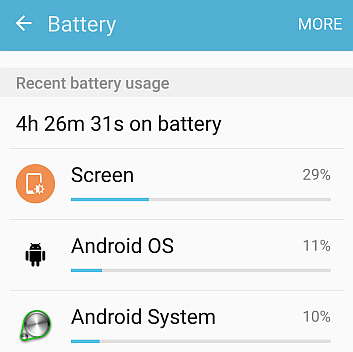