Help
Sign in
Turn on suggestions
Auto-suggest helps you quickly narrow down your search results by suggesting possible matches as you type.
Showing results for
Search instead for
Did you mean:
More Options
Correct Answer!
Software Update Failed

I just bought a pre-owned Verizon Samsung Galaxy S5 SM-G900V from a buy & sell group on facebook. It was up on sale for a very cheap price (around US$ 20) so i grabbed it immediately. The phone was in excellent condition upon checking it, and aside from a few fades on the chrome, there was no other problem.

Unfortunately, it was still on lollipop when i got it, so i immediately updated the software through OTA. When the update finished, i turned off the phone and then booted to recovery mode. It wouldn't go through to the recovery mode, instead i get a message: "Software Update Failed...Your device didn't update successfully. Use the Verizon Software Repair Assistant on a computer to repair your device and complete the update."

So, i removed the battery and then tried to boot up the phone normally, unfortunately, it gave me the same message. So, i went to a computer shop (because i don't have a pc) and then downloaded the Verizon Software Repair Assistant from this link: http://support-us.samsung.com/VerizonSoftwareUpdateWin installed it, connected my phone to the computer and clicked on start repair. When it gets to about 85%, it just wouldn't push through. The repair process wouldn't finish because it says the phone is disconnected or something. I've tried it numerous times and it just doesn't push through.

Can anybody point me to the right direction?

BTW I'm in the Philippines, i bought the phone here as well. The seller said it was from his sister in the US.

I've attached a photo below of what my phone looks like when i try to power it on normally. The picture quality is not good though, but that's how it looks like. That's as far as it would go when press on the power button to turn it on. 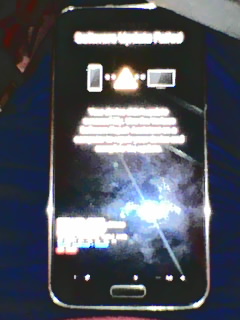 Have you tried using Kies or smart switch? If you can go back to where you tried the SUA see if they have either one of these programs to see if they will work.

do you think it might be a problem because the verzon phone is in the phillipines??

Chuckrn, I hope all is well down in the Philippines. Having your device up and running is very important. Bearone21 brought up a good point. There would be issues with updating the software on a device when outside the United States. When you try to process an update on your device, it would be required to be connected to the Verizon Wireless Network in the U.S. We would recommend reaching out to Samsung directly to see if there would be a workaround to get the software pushed out to your device successfully. You can find their support page by following this link https://www.samsung.com/us/support/.

The same exact thing happened to me.  Verizon store was no help.  This was a software issue and NO ONE would help me at the store St. Augustine, FL or online.  I was actually talked down to at the store.

It is now asking me to do this update again on the replacement phone.  I WILL NOT DO THIS as it is full of bugs.  Samsung and Verizon need to fix this.  Anyone know how I can stop the message to update from popping up?  I am not installing and ruining another phone.

If you go into setting-application manager then at the top there are 3 dots tap that and tap show system apps. Then go down to System updates  there are 2 of them. Go into both of them and tap force stop. That should help for awhile. I never trust the updates because I know of some people that have been able to put them off for awhile but others myself included have had their phones update by themselves.One of the things I would do is get smart switch and do a full backup of your phone. This way if you do get the update at least you will have the backup in case something goes wrong during this update. If you do decide to go with the update once it is done go into recovery mode ( Volume up-power-home ) and clear the cache partition.

This will clear out all the old files and usually helps with a lot of problems people have with their phone after an update.

We're sorry to learn of your experience with the software update and your visit to the store. We want nothing but the best interactions for you, so we appreciate your feedback.

In our checks, we were unable to find any known issues with the most recent software version for the Galaxy S5. When trying to update your phone, were you attempting to complete the update Over the Air or were you using the Software Upgrade Assistant http://spr.ly/6586DJFoi ? What software version do you currently have installed on your device?