$899.99 (128 GB only) device payment purchase or full retail purchase w/ new or upgrade smartphone line on One Unlimited for iPhone (all lines on account req’d on plan), 5G Do More, 5G Play More or 5G Get More plans req’d. Less $899.99 promo credit applied over 36 mos.; promo credit ends if eligibility req’s are no longer met; 0% APR. Excludes Verizon Prepaid plans.
end of navigation menu
Help
Sign in
Turn on suggestions
Auto-suggest helps you quickly narrow down your search results by suggesting possible matches as you type.
Showing results for
Search instead for
Did you mean:
More Options
***Announcement: Early next week, we’ll be merging the current Fios and Wireless Communities into the all new Verizon Community! Beginning the evening of Sunday 12/4, both Communities will be placed in read-only mode. You’ll still be able to visit the Communities and browse content, but login will be disabled. On the afternoon of Monday 12/5, all users will be able to log into the new Verizon Community. We expect the new Community to be fully functional the morning of Friday 12/9. Additional details can be found in the Announcements board and under Featured Topics!
Correct Answer!
storefront conned me corp Verizon corp torturing me while trying to resolve it

Stopped in storefront on Thursday to see if they could figure out why I couldn't access internet while out and about. Storefront told me that my Samsung S20fe got a defective software update that couldn't be reversed, that there was a lawsuit against Samsung but Verizon could swap out my phone with S20 Ultra for no cost. On Friday I got a bill for $1400 at a time when they had my 4-month-old $650 phone taken in the swap. Was on the phone Sat morning with Corp Verizon and was told to go to storefront to ask for phone and to return the one they gave me. I went there, the rep said he didn’t have the phone, mocked me saying it was impossible that I got a bill and then refused to look at the bill when I tried to show it to him online.  I got angry and told him his software story was also a lie per Samsung. He then directed me to go to the door and leave. I refused, he called police and I left. I went home and was next on the phone for just short of 6 hours speaking with fraud dept and customer service several time and finally got a gentleman who offered me a choice of either of two phones at no cost and a phone case but explained that I would have to pay tax on the new phone. I would be charged for the phone but credit would be applied and it would take about 3 billing cycles to resolve. He also sent me a shipping label for the phone the store gave me (the $1400 one). I was told to call back with phone choice decision. I called, the woman said she couldn't tell if my phone was returned yet so she thought it was a bad idea to place an order and wanted to put me on hold while she checked with another group. I couldn't take it anymore so I said I can’t take being put on hold again. On Sunday I spoke with a woman who's first response was that an order could not be placed since there was already an open credit for the phone the store billed me for. She said I'd have to first give them that phone back. The gentleman had emphasized to me to absolutely not send that phone back until I got the one, he offered so that I would be able to transfer data. She put me on hold and came back saying I wasn't eligible for the promo as my existing plan was not one to which the promo applies. I would need to take an unlimited plan (cost netted out to equal my current plan due to age and auto pay credits). As the gentleman had indicated yesterday, I do have to pay $60 tax on sale of the phone but she contradicted him and said the phone equipment would be charged and then credited every month for the next three years, (effectively putting me in a contract for three years until the phone is paid off). Despite the absolute overload of torture they put me through, she would not give me a case. Her tone was that Verizon had made enough concessions and she emphasized that they are in essence not charging me for the phone and will waive the restocking fee. I responded that I've been tortured, I didn’t initiate the upgrade and that I'm already out $60 for tax because of the storefront Rep's commission fraud. She said she'd have a Mgr call back, no one has. Any advice what you would do at this point if you were me? Anyone know contact info for Senior exec who I could ask to have this set up as a one-time purchase and payoff so that I am not in a three-year contract and who would agree to give me a case. I'm both upset and livid over the anxiety they have caused me and feel like I deserve some combat pay tool

I have the same question
2 Likes
Reply
6 Replies
Correct Answer!
Re: storefront conned me corp Verizon corp torturing me while trying to resolve it

WOW!! I am very sorry, you are having the issues and/or concerns you are experiencing.  I would first contact The Better Business Bureau and then follow the steps I have listed below to contact Executive Management to inform them on what your Issues and/or Concerns are at this moment.

1. Go to www.verizon.com and then scroll to bottom of page... 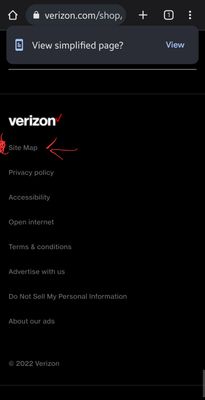 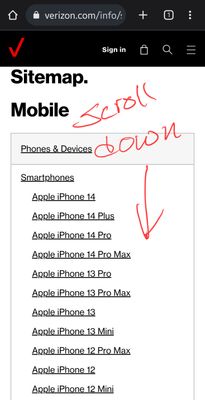 Til you see Company, then Tap and you will see Leadership... Tapp on Leadership. 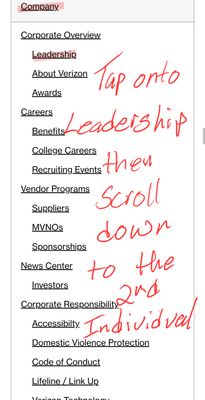 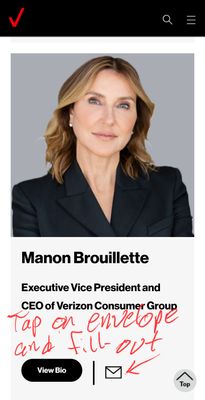 I hope the information I have provided gives you the help you need to resolve the Issues and/or Concerns you are dealing with. I wish you the Best of Luck!!

Salty... Oh, yes I am!!
0 Likes
Reply
Correct Answer!
Re: storefront conned me corp Verizon corp torturing me while trying to resolve it

I would also recommend contacting the FCC and filing a report as well. I would not go into any further discussion with any other vzw_customer_support until I did the things listed in previous reply and the above with a reply from Executive Management.

Once again, I wish you the Best of Luck!

Salty... Oh, yes I am!!
0 Likes
Reply
Correct Answer!
Re: storefront conned me corp Verizon corp torturing me while trying to resolve it

Thankyou so much. I am so grateful for your help.

1 Like
Reply
Correct Answer!
Re: storefront conned me corp Verizon corp torturing me while trying to resolve it

Good morning, thanks for reaching out. We are unable to view the information above as it is too large. Is there a way you can shrink/condense?*Justin

My issue with this carrier is less severe, .... however I was held

Held Hostage  &  Tortured at the Verizon Store  while a device troubleshooting Ticket was started.

Did get a Ticket going, ......but I may never be OK with Verizon Wireless again.

Oh my, hearing this has me truly concerned. I am glad to hear you have a Service Ticket going, however, I am here and ready to help you in any way I can. Please send a Private Message, if you still need assistance.