Mobile solutions
Home solutions
Have a phone you love? Get up to $500 when you bring your phone.
$500 via Verizon e-gift card (sent w/in 8 wks). Activation of 4G LTE/5G phone on 5G Get More plan req’d. Device must remain active for 45 days. $500 charge back if service cancelled w/in 12 mos or eligibility req’s are no longer met. See vzw.com/bring-your-own-device for details.
Help
Sign in
Turn on suggestions
Auto-suggest helps you quickly narrow down your search results by suggesting possible matches as you type.
Showing results for
Search instead for
Did you mean:
More Options
Correct Answer!
Galaxy Nexus doesn't charge

I'm having a problem with my phone not charging no matter the source it's connected to (wall, usb to pc, alternate chargers). It does nothing when connected to wall/pc and powered off, but when powered on and connected to a PC I'm able to access the virtual SD card. I purchased this battery charger stand 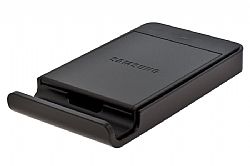 to see if my original battery was defective. It came with an extra 1850mAh battery and it also will not charge from the phone, but both batteries will charge from the charging station. Anyone else having this problem?

I havent had any charging issues. Maybe someone else has. I CAN drain the battery while charging if i have hotspot turned on while maxing out download speeds on 4g. A 750ma charger just couldnt push it fast enough!

Gath99 congratulations on the new Galaxy Nexus! That is unfortunate that you are unable to charge the device. Has it always been like this or did it just start? Are you with in the 14 WFG time frame? If you are with in the WFG time frame I would return the device. If your WFG time has passed then I would recommend swapping out the battery for another one. I hope this helps.

gath99 did mention that the charger they got came with an extra battery. I don't believe it's the battery at all. I just got this phone and I'm having the same issue. It's the micro USB port, it's faulty on many of the phones. The only way to resolve it is to swap it out under manufacturers warranty but it's up to Verizon to honor that.

I work in cell phones and we've had a lot of them coming back with this issue as well, we usually swap it out under manufacturer's warranty because people notice the problem well within the return policy.

I'm having the same problem and have read on other forums that others have had the problem.  I have two batteries, and neither will charge in my phone when it is on.  Occassionally, the batteries will charge when my phone is off.  However, they charge fine in a co-worker's Nexus.

My problem didn't start happening until recently (I've had the phone for over two months now).

I have a similar problem.  Originally battery and charger.  Phone will not change with original charger or PC.  Phone will not even power on now.  It was working just fine one morning.  I plugged it in to charge and walked away for a while.  When I came back a few hours later it was and still is completely dead.

I am having a charging issue as well, just did some travel, the battery did get critical a couple of times, now won't charge at all.

I had heard there were batteries problems with Smart phones, but hadn't anticipated having to pretty much leave the phone plugged in, now it won't charge at all.

Curious as to the number of phones sold, charging problems, analysis of problems and resolution.  Now I know why it took so long for Verizon to release the NEXUS

I also have the same issue. I have had the phone since the day it came out, but this charging issue started about 2 weeks ago, and has gotten worse. At first I had to reboot the phone just to get it to charge when it turned back on. Now it shows it's charging only when the phone is off, but then it won't charge.

I see that quite a few others are having this problem.

I contacted the help desk, the phone is still under warranty, but even with a 24 turnaround in delivery of a replacement at my cost, it is difficult to go without a phone.

Will this problem continue to happen, we'll see??  Then we'll see how good Verizon is about customer service.

I contacted Verizon today and they aren't going to charge me for the replacement. They are mailing me a "new" (reburbished) phone with overnight shipping at no cost to me. I am just hoping the replacement doesn't end up with the same issue! I just referred them to the numerous forums on this website and other websites of people all with the same issue. I just hate that I am going to have to buy a new screen protector and phone skin.