Mobile solutions
Home solutions
Have a phone you love? Get up to $500 when you bring your phone.
$500 via Verizon e-gift card (sent w/in 8 wks). Activation of 4G LTE/5G phone on 5G Get More plan req’d. Device must remain active for 45 days. $500 charge back if service cancelled w/in 12 mos or eligibility req’s are no longer met. See vzw.com/bring-your-own-device for details.
end of navigation menu
Help
Sign in
Turn on suggestions
Auto-suggest helps you quickly narrow down your search results by suggesting possible matches as you type.
Showing results for
Search instead for
Did you mean:
More Options
Correct Answer!
Re: Jellybean 4.1.2 or 4.2?

You beat me to it.

I agree, Verizon needs to get on the ball when it comes to these release dates. Google offers a beautiful thing that "could" excite customers as much as the iPhone if Verizon would give them the time of day to release on time updates.

Don't wait for their updates.  See image below - bug free for the past week.  Reception is bad because I'm presently in a concrete bunker at work, but 4g, WiFi, etc work flawlessly, and I'm getting anywhere from 12 - 16 hours of life out of my battery on a regular basis with moderate to heavy use.

This is a Dev phone - treat it as such, and release dates only become relevant when Google posts them.  As far as 'warranty concerns', just get an ODIN package and keep it handy for those 'just in case' situations.

I pay my carrier for my network and voice services, I don't pay them to maintain an OS built by Google.  Just saying. 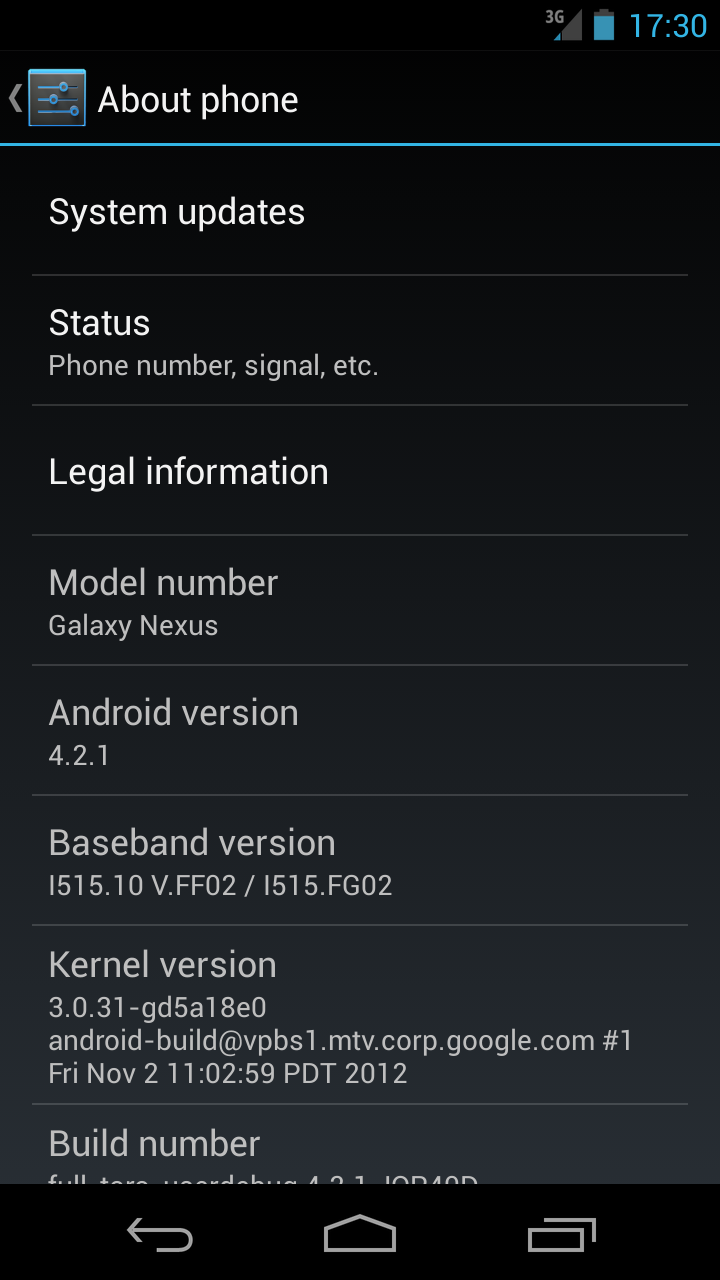 Sent from my mobile phone. Please excuse any typos.

Message was edited by: Verizon Moderator Please remove any personal information from signatures before posting to this Community.

Don't expect anything from Verizon, they are the worst carrier to deal with. The haven't released 4.1.2 or 4.2 and there is now a 4.2.1 update. I'm through with Verizon in a little over a year and will NEVER do business with them again.

The ONLY reason I bought this phone was because Verizon promised it would be treated as a NEXUS phone! It has not been.

Google may be starting up a Carrier of their own in the near future with talks with dish or direct, i forget which one. They asked Google if they'd be interested in getting in on the mobile carrier game and it looks promising. I'd gladly join a Google carrier and settle with 3g services for a year or two till they got some type of 4g in place.

I'm sick of Verizon being cheap  control freaks over updates and using the minimal amount of resources as possible to update phones, that "they" deem necessary to update. Verizon has a set of criteria to not update phones, from popularity, to units sold, to a list of reason not to. Verizon has to pay for updates and then pay for testing for an update to a phone. There have been updates for  quite a few phones but Verizon passed on them because they were not popular or didn't sell enough, screwing those customers who did by the phones.  Now they are just not updating at all it seems again, and just passing on them all. And CS never knows anything about anything about updates or software opr basic information that they are reading off the screens of their computers that verizon force feeds them. The most common answer I get is "I don't know."

When I came to Verizon for the Moto  D1 I never had problems, until the Galaxy Nexus and what it was supposed to be. After the 2 previous Nexus phones it looked like it would be an amazing device and was supposed to be updated with the most current os first, oppose to skinned devices, said the sales rep as well. If I knew how much of a nightmare updates were going to be I might have went elsewhere. Other than the network coverage, everything else about verizon is poor to my satisfaction, especially the new Tiered Shared Data plans that were designed to gouge the pricing of data for the customers. The worse thing is people are paying premium prices for 4g and not getting any type of 4g speeds they pay for. In St.Louis and Chicago I averaged 12 down and 5 up on average, and Chicago is spotty at best for 4g. Technically true 4G was supposed to be 100 mbps, until they changed the definition of it for their purposes only. My 4G is the same as my wifi at home, which is ridiculous IMO. Even in a recent article vzw says that they'll be figuring out 5-6g when other are getting 4G, how about actually providing true 4G for what the real definition state's it is?

I'm sure by next year when millions of contracts are up from all the new 4G phones from the end of 2011 early 2012 are up they are going to see a mass exodus of people leaving their carrier and going elsewhere. By then Sprint should have their true lte network up across most of the nation.

I'm another user who is extremely upset with Verizon for the handling of the Galaxy Nexus/Google Wallet.  I purchased this to be a Nexus Phone...the first to receive updates...yet it is now the last with no information on when it will be updated to 4.2 or 4.2.1.

Verizon can blame Google all they want, but we all know the problem is verizon's oppressive policies.

I feel Verizon completely false advertised this phone by using the "Nexus" branding.  If they weren't going to allow the Nexus to be what a Nexus is...then they should have re branded to something else instead of trying to use the Nexus name and give us a sub par Nexus experience.  Verizon false advertised with this branding.  Having been a Verizon customer for years, the Verizon 4G LTE oppressive policies are just becoming too much.  I feel this will be my last Verizon device, and when my contract is up i will be moving over to Sprints LTE service.