Help
Sign in
Turn on suggestions
Auto-suggest helps you quickly narrow down your search results by suggesting possible matches as you type.
Showing results for
Search instead for
Did you mean:
More Options
Correct Answer!
Reboots when on Phone & Navigation

Anyone else have this combo reboot the phone?

I have the same question
0 Likes
6 Replies
Correct Answer!
Re: Reboots when on Phone & Navigation
B33
Sr. Leader

@ChYugo:  try a soft reset with your phone while it's on pull the cover then the Battery. While your battery is out hold down on your power button for 20 sec. then put the battery back in turn it back on an see if this helps it. If Not call teck an tell them the issue your having with it an see if they can fix it. But give the soft reset a try an see if Helps any. B33

I am having a similar problem. Did the restart occur while your phone was plugged in?

I had this problem happen to me 2 days ago. I was using Google Navigation and talking to my mom on the phone, when it suddenly rebooted in the middle of the call. It gave my mom a heart attack (not literally, but probably pretty close) because the call just ended ubruptly and she thought I had been in an accident. I had to wait for the full reboot plus the phone to find signal again before I could call her back and tell her I was okay, that my phone was just acting up. I would appreciate someone looking into this, and a fix.

We are always interested in hearing from our customers! Customer feedback is what we use to bridge the gap between what products and services we have and would like to provide. I noticed that there has been some great suggestion provided from other community members such as B33 and Wildman. May I ask have you tried these troubleshooting steps yet? If so then what was the results? Another step that I like to recommend is to use VZNavigator. Although it is a paid GPS app, using VZNavigator can help us identify if it is a device issue or a app issue with Google Maps. If you get the same results with VZNavigator then the issue may be device related.

Another troubleshooting step is to verify that you have the most current version of Google Maps. Once you have done the steps above as well as the previously suggested steps then please reply with your findings for additional assistance.

I'm having the same issue and My verizon Store at 9021 Snowden Square Dr has been very willing and amicable but I'm still having issues. Along with the annoyance my software engineering job makes me want to isolate and figure this out. To that end I can give the following information:

In my case it's stricly with the google navigation app. It's done it it while plugged in to the car charger (an official verizon model) and it's done it on battery.

It seems to do it more often when the app isn't in running in the foreground like if I'm using the music app in the forground or if I'm talking on my phone. That said it will do it when nothing else is running and the navigate app is in the foreground as it did to me this morning.

It's done it one two different batteries. The one that comes with the phone and the extended battery that I got over the holidays.

I noticed when it does it there is a corresponding non continuous jump in my battery (if it's on being charged the battery life  graph jumps up; if it's on battery the graph has a non continuous drop)  See attached screen shot 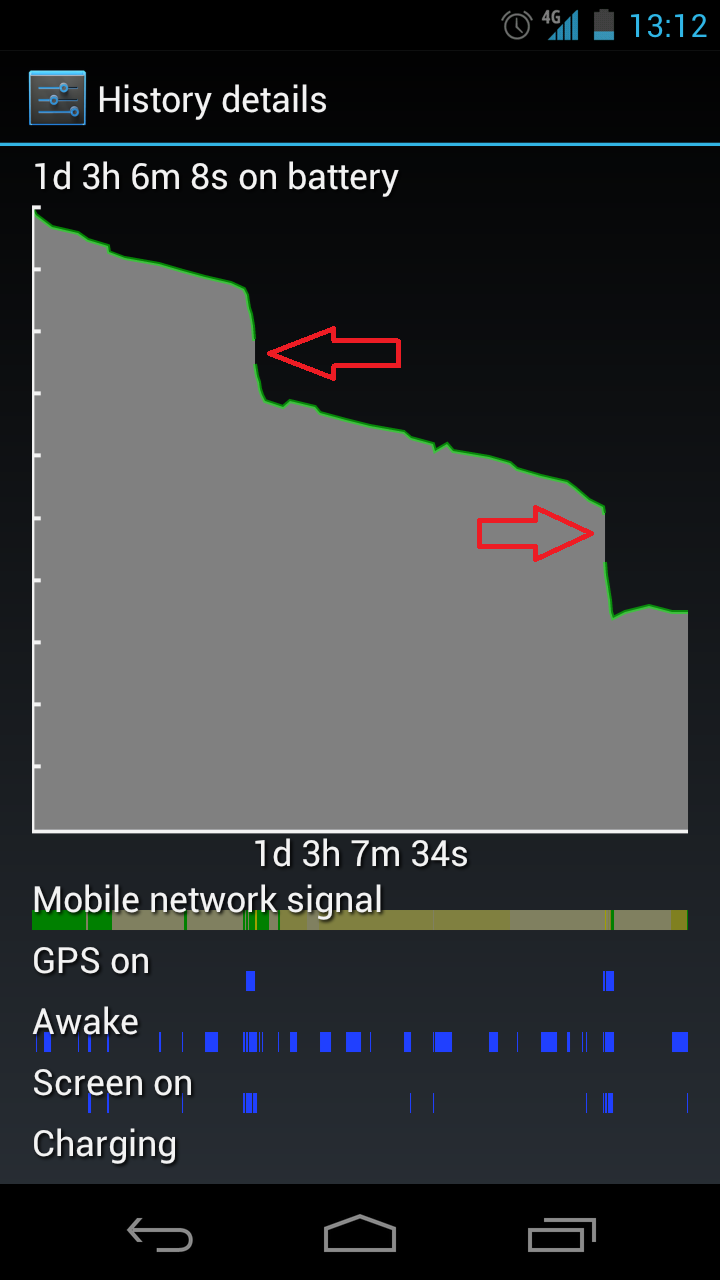 The Verizon store I baught it from gave me a replacement phone and said they haven't heard of this issue, from what I see on the net it's not as common as the rebooting while playing music so I'm inclined to believe them. (Note: this sim card was not changed. It was taken from the first nexus to the replacement device)

Along with the swapping of batteries phones, etc I've also uninstalled any 3rd party applications and did a factory reset, that hasn't solved the problem as it just happened yesterday and today.

I will try the soft reset mentioned above and also I will try the paid  vznavigate app to see if I can isolate it to the app or the hardware software interface between the phone and OS.